Pictures from a DAY

We had a total cluster fuck of a day today.  And for some reason, these messes always seem to occur on MY WORK DAYS grumble grumble.

First of all, Harrison had chest pains starting at lunch yesterday.  He told us right away instead of worrying about it until the doctor's office is closed for the week and needing to hit the ER.  We were so excited about his prompt reporting that we bought him a pint of his favorite ice cream which he ate in 2 sittings.  He gets that from me.

I took him in for an echo today-- all clear, but we are going to keep an eye on it-- I am worried that fluid will accumulate in the next  or so days.

Then I ran him home and turned around and went all the way back across town to campus to teach my class.  Ben took all 4 kids to Harry and Jack's dress rehearsal for their play this weekend, and then we all met up at an indoor soccer place 40 minutes from me on campus and a good 25 minutes from rehearsal.  SO CONVENIENT.  There, we switched cars so Ben could go to a soccer coach meeting (he is coaching Jack's kindergarten team and has to get licensed-- he was in for a whole night of soccer drills and came in khakis and Vans--oops) and I could take the minivan of screams out for dinner because that seemed preferable to dealing with everyone and everyone's mess at home.

HOLY SHIT IT SUCKED SO BAD.  Lots of screaming.  And I felt like a total cheap-o because it was kids-eat-free night and it seems really tacky to get 4 free kid meals when just buying 1 adult meal-- I would feel better with Ben there too (FOR MANY REASONS).

I went to a new grocery store thinking we could all eat salad and hot bar/Chinese/grilled deli sandwiches. I thought it would be like the mall food court but less gross/like Whole Foods but more gross.  But I accidentally went in the sit-down restaurant area which I wasn't expecting because it's a damn grocery store.  Bah. 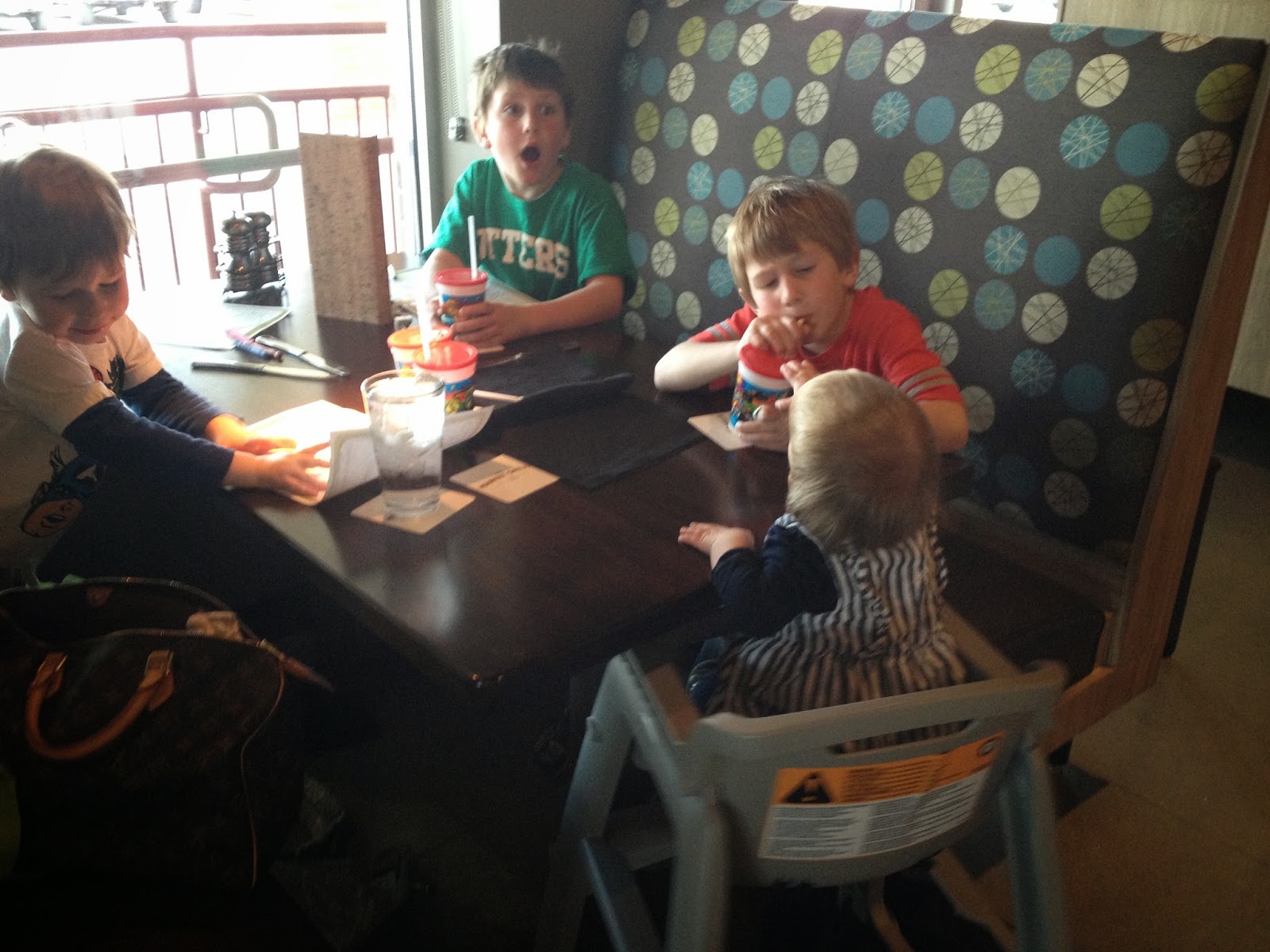 Now the children are asleep-- just an hour later than usual-- and I have a huge glass of wine and all of my screens.  And Ben is still playing soccer.

I think my FB friends think I am kidding when I say I have Duggar hair, but let me show it to you: 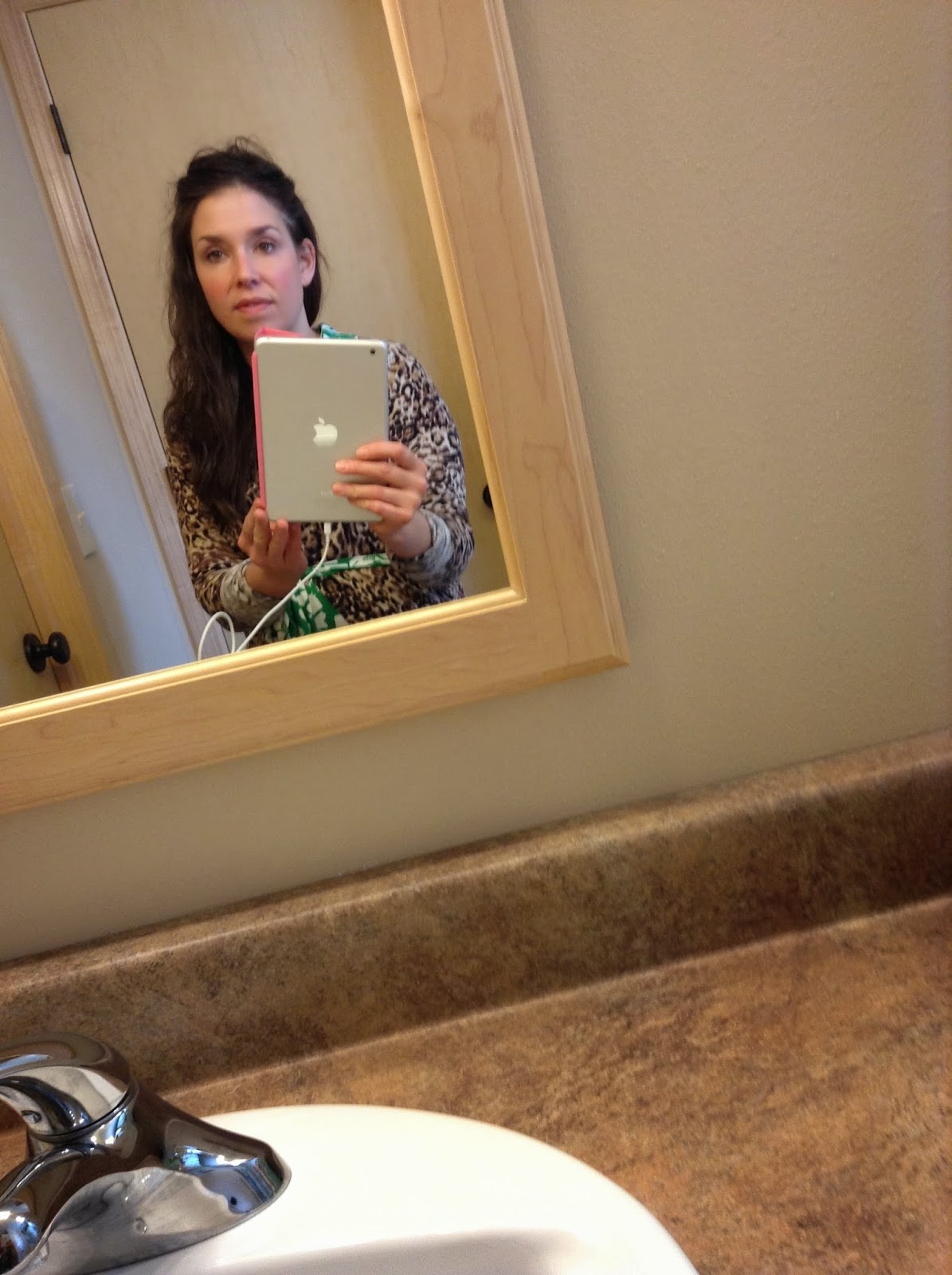 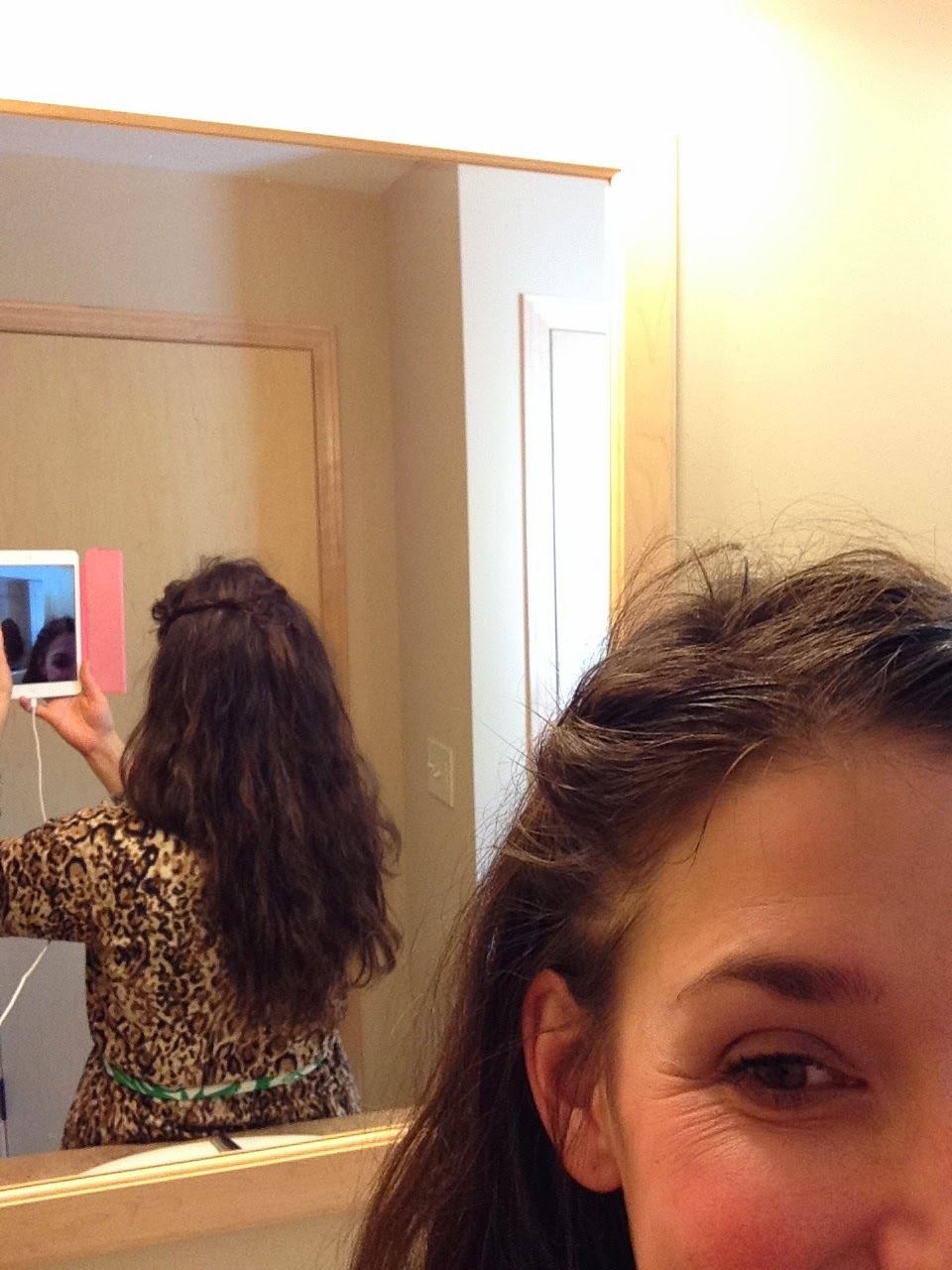 I am nothing if not committed to a plan, though, so I am determined to let it grow throughout the summer.  I need my creepy postpartum breakage bangs to get as long as possible.

Randomly, Cooper loves to help me put my make up on (by putting it on himself), and I love his look of concentration. 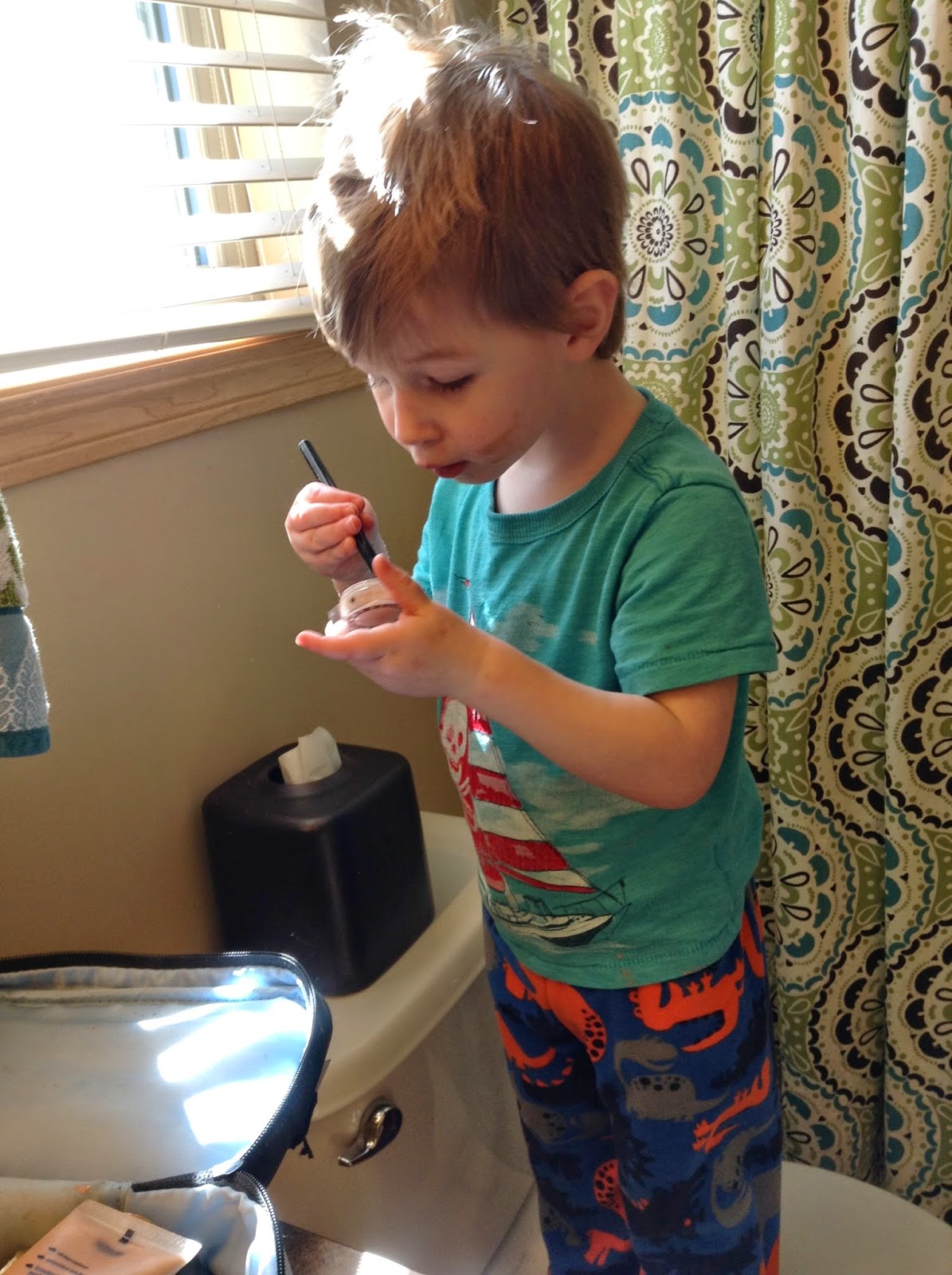 And the concealer stripes on his chin. 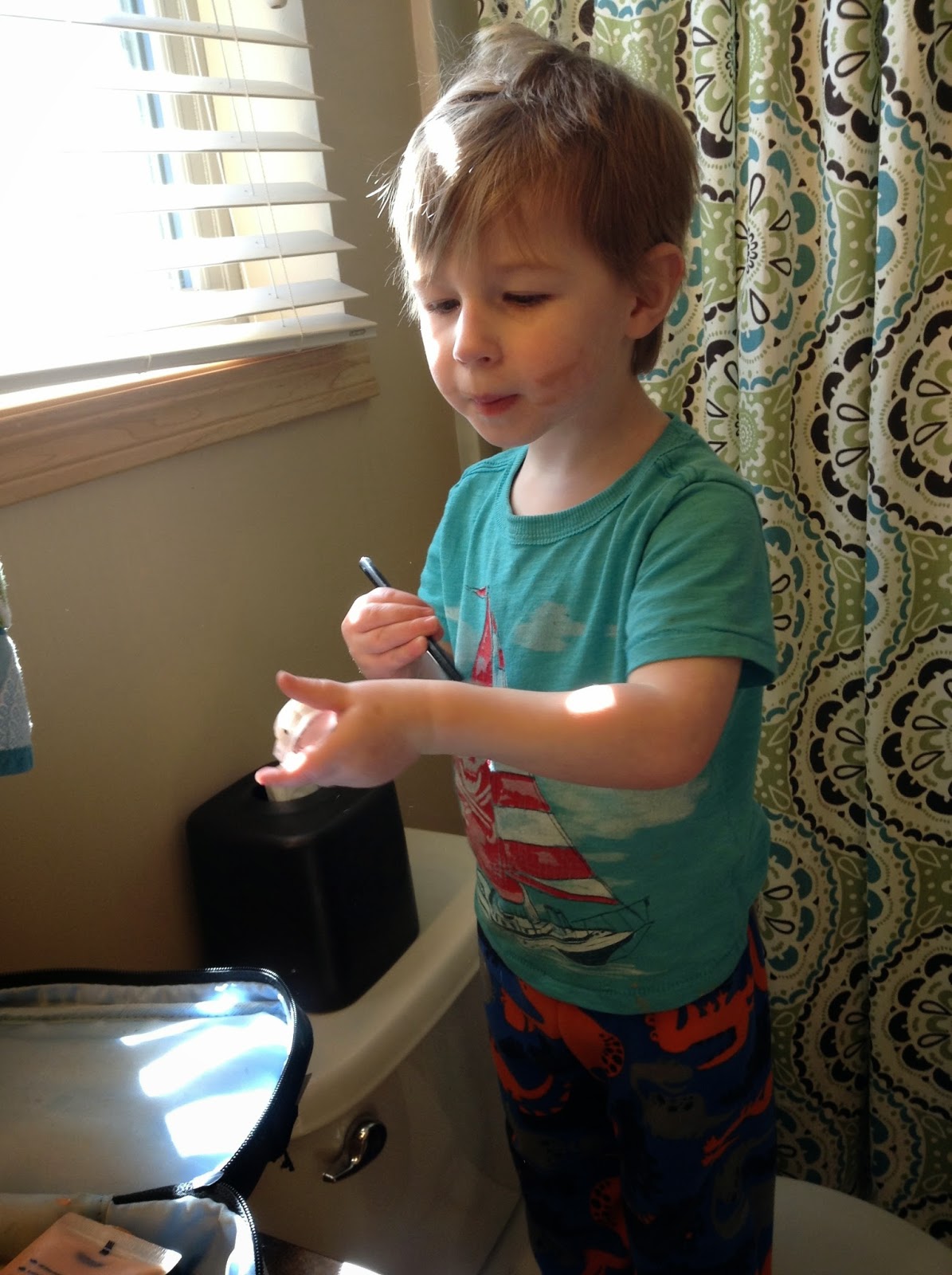 I hope Harry stays clear. That must be so stressful.

And a grocery store with a sitdown place? Weird and kinda great. If they didn't want to make free kids meals they wouldn't have free kids night. Ikea has free kids' food on Tuesday and it's like large family central. Once I followed a family of six kids all the way from the Y pool (also has one family price admission) to Ikea for free lunch.

"Creepy postpartum breakage bangs," you too? I actually had someone say they liked my haircut with all the "wispy baby bangs." I almost hit her. They clearly don't look like they were intentionally cut that way--it's just that I've lost so much hair on the sides and these are the only odd regrowth I've got. But your hair looks awesome and thick. Did I mention thick?!!!!