On Tuesday night, I went to bed at 11, which was a bad idea, but everything was a little later with the kids' bedtime, and Ben and I do like to unwind with some wine and conversation most nights, so 11 it was.  And I had maybe a bit too much wine (trying to build up my tolerance for a super fun Napa trip on the horizon).

At 11:53, Cooper, a wonderful sleeper who is usually quiet for a solid 11-13 hours,  jolted me out a sound sleep screaming "MAMA MAMA MAMA MAMA." I ran to his room only to have him shriek "MAMA NO PAPIPOPPAH" (pacifier).  I blinked a few times and then found one in his night stand (because what else would a 2 year-old keep in his night stand but a supply of extra papipoppahs?).

And then Dorothy started screaming.  She sometimes wakes at 11:45, and I promptly roll over and ignore her because no.  Just no.  Not happening.  I am fine with her waking up between 3 and 5 and wanting to snuggle until 6:30 or 7, but anything else?  NO.

Tuesday night, though, she would not stop screaming.  I brought her a sippy cup of milk because holy cats I did not want to bring her to bed that early.  She looked at me incredulously and then screamed with rage.  I told her it was night night and went back to bed.

Eventually, though, I realized she was not actually going back to sleep, so I brought her in bed.  She started nursing, and I closed my eyes.  But I noticed she wasn't really eating, and every time I opened my eyes, she just started accusingly at me.

This went on until 4-ish (we both slept from like 2:30-4) when I put her back in her own bed.  She protested a little, but I could tell she didn't really mean it, and she was out in seconds.  So was I thank goodness, at about 4:20.

All 3 of us were tired and cranky all day, but luckily the babies are easy to trick.  At 10:20, I turned on Daniels Tiger, the universal sign that it is lunch time and made them some food.  They were both sleeping by 11.  Which was fortunate because we had to go to Harry and Jack's spring music program.

Dorothy's outfit was epically awesome today, but she ran away so much I could only get this one picture of her running away: 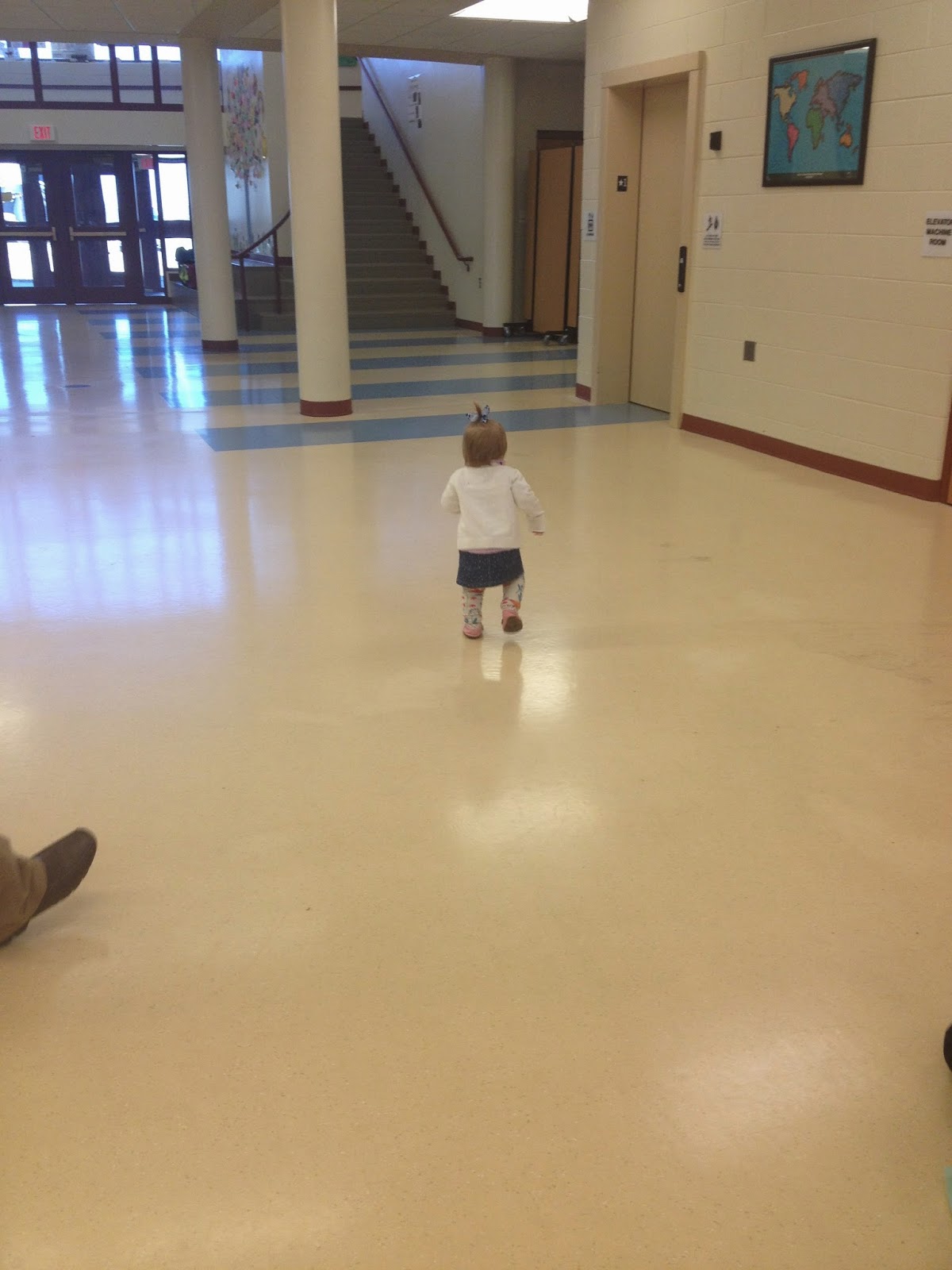 And this one of her running angrily to snatch my phone: 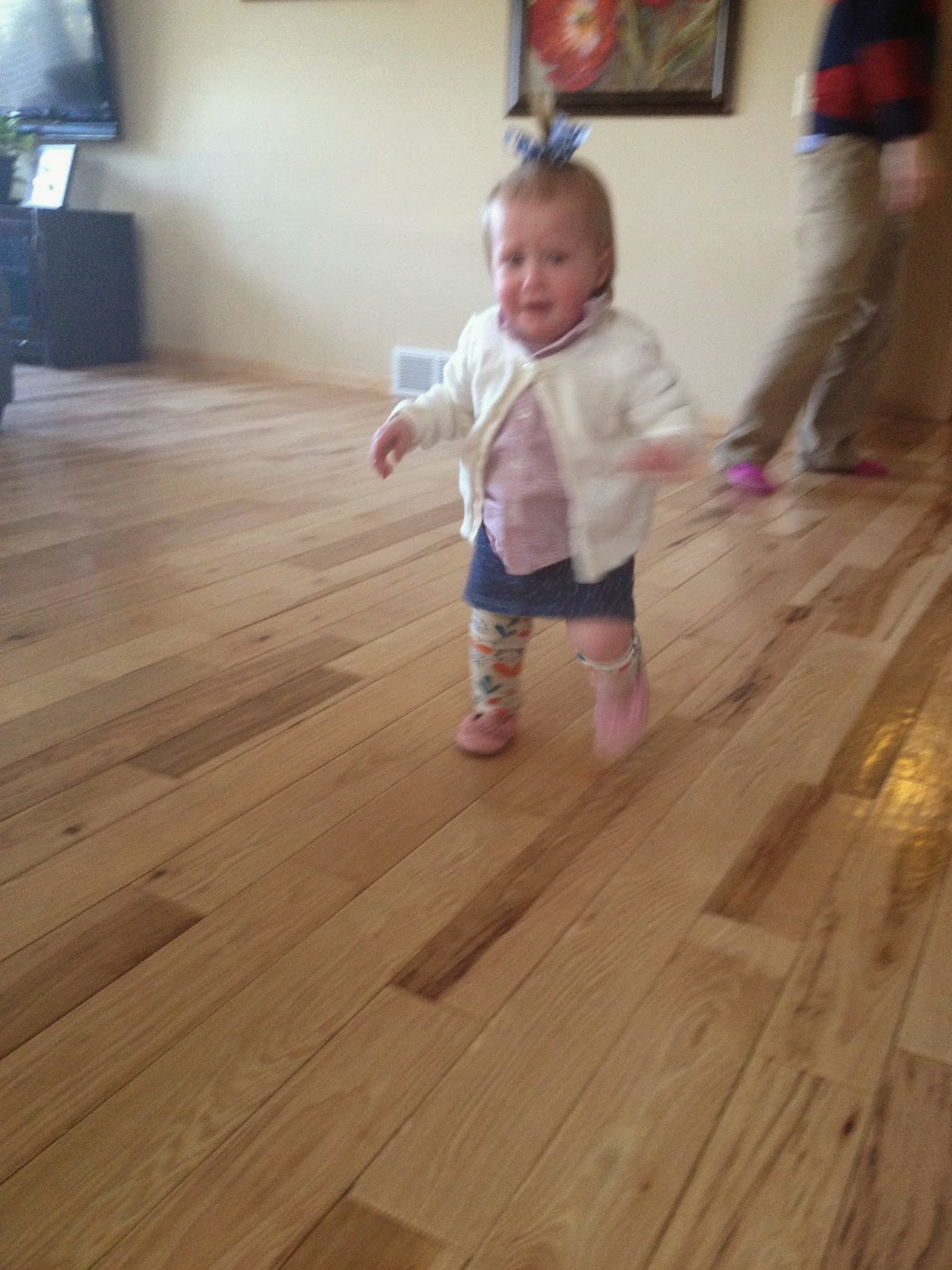 But trust me: fox-printed leg warmers, a polka-dotted denim skirt, a gingham oxford, a cardigan, ballet slippers with no socks, and her signature, bow-wrapped whale spout.


Typical terrible music shots.  My kids are in tie-dye (they looked shittier than usual today, which was pretty funny since lots of kids were dressed up) 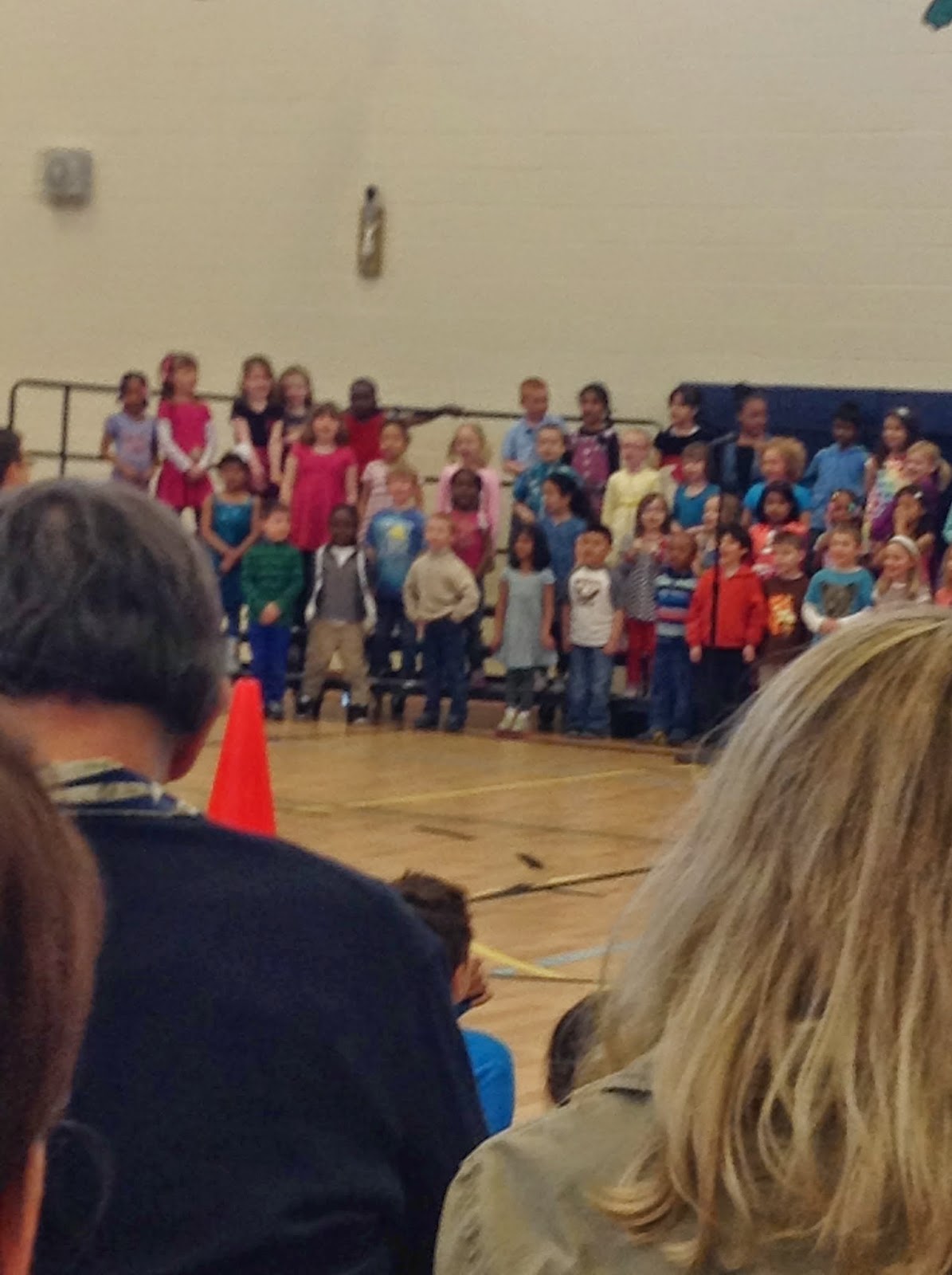 Before they went onstage, all the kids were sitting on the gym floor, and I took Cooper over to say hi to Harry who was searching the crowd for us.  His gym tracher saw him talking and came over to tell him to be quiet (in a really mean tone).

I said, "Oh, yeah, he's not quiet right now because he's saying hello to me, and I am his mom."
"Oh," she said.  "That's okay."
"Yes," I told her, looking her directly in the eye.  "It is okay if my son talks to me whenever he wants to."  And I stood there staring at her until she walked around to another row of kids.  Harry said she always sounds mad like that when she talks to him.  AWESOME. (that was a sarcastic awesome, BTW) 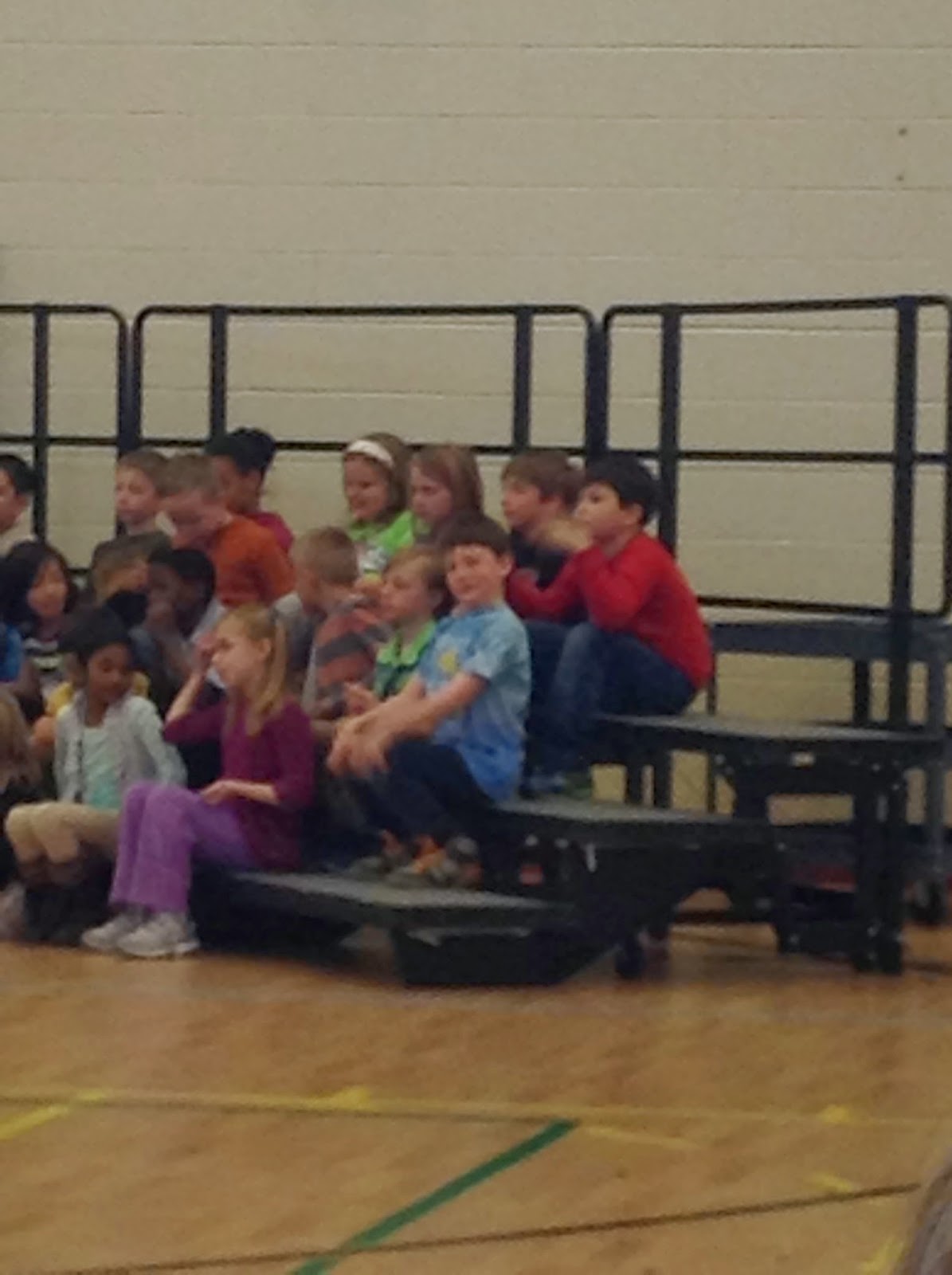 After months MONTHS of wearing nothing but athletic pants and pullover t-shirts that need to be tag-less as well as free of buttons and collars, Cooper answered yes when I asked him (like I do EVERY DAY) if he'd like to wear jeans and a shirt like Daddy's.  I wasted no time in dressing him.  He donned a tie for the music show, but no picture of that-- too many tantrums. 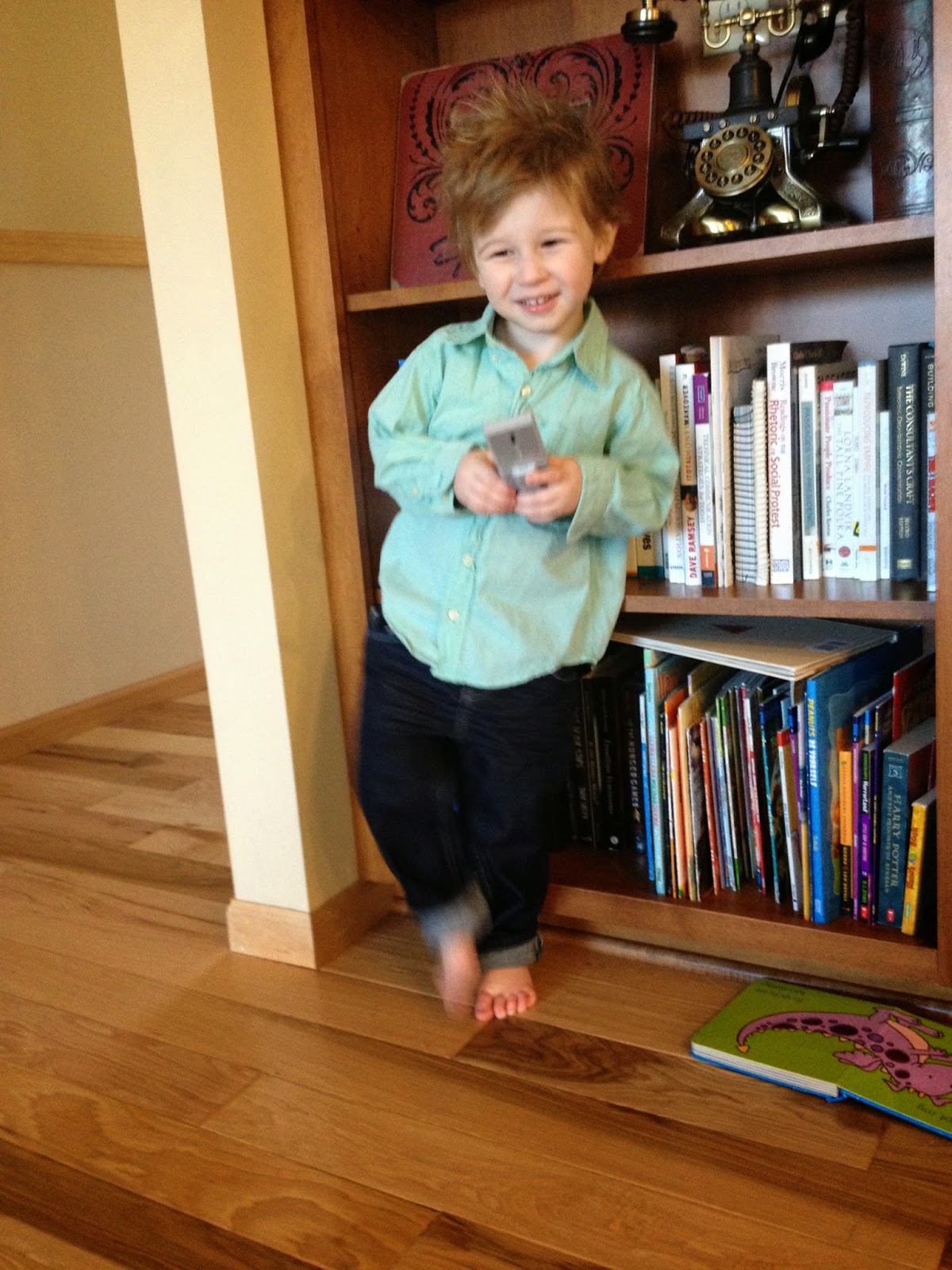 And then we closed the day with dress rehearsal for H and J's play-- pretty cute! 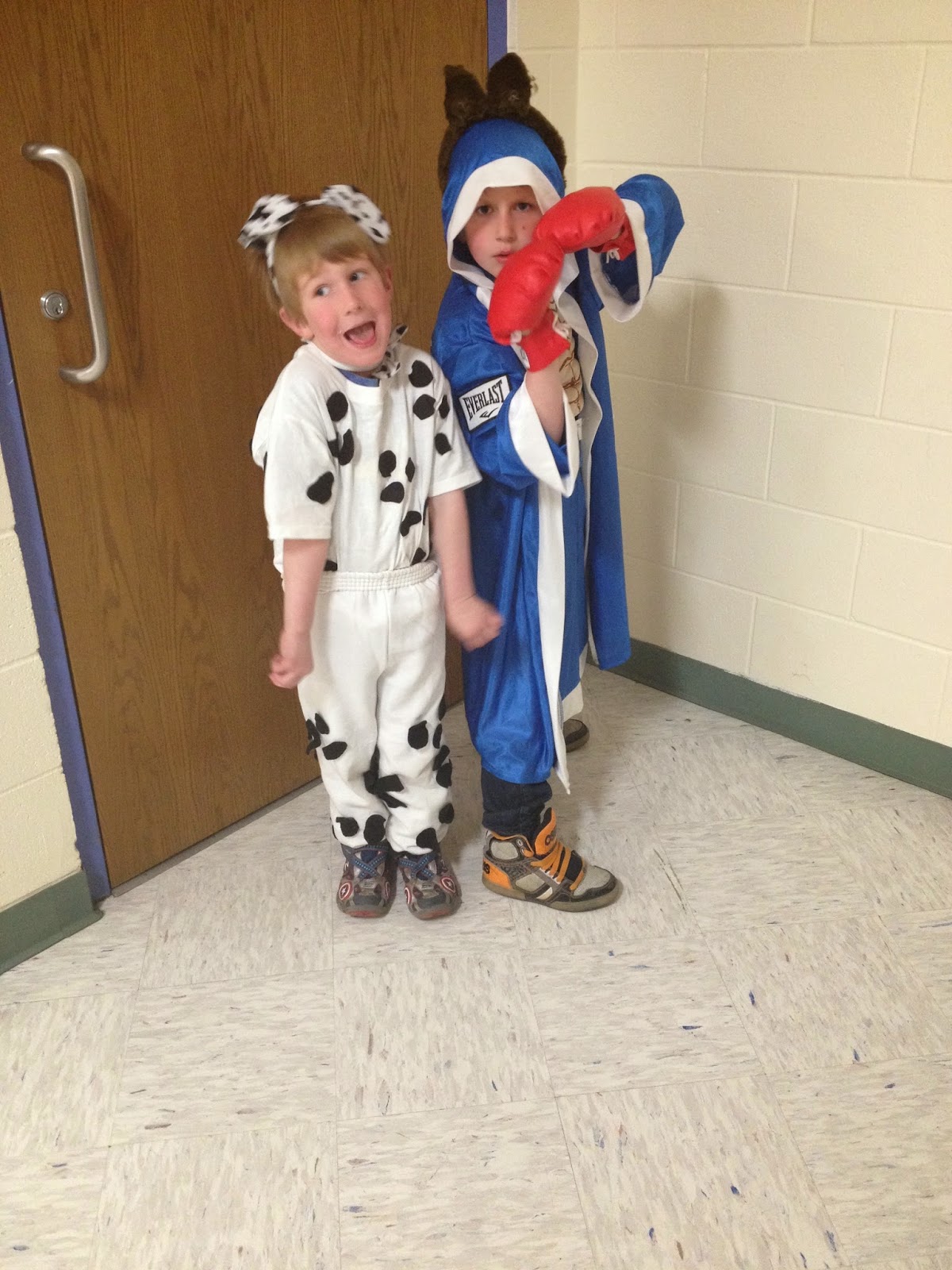 Uh, wtf was up with the gym teacher? I have big issues with teachers who think they own the students during the school day. I am *lending* you my child, but they are still very much mine.