We saw Harry's pediatric cardiologist today.  Effusion still there.  About the same.  We see her twice next week.  Lots of echos in our future.  Blergh. 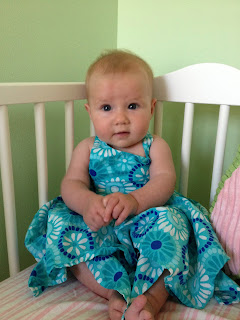 It is hot and humid and generally yucky here.

We left swim lessons early on Tuesday because I couldn't tell if Dory was asleep on purpose it was so hot.  We came home to make cookies on the dashboard of the minivan (because it is disgusting and smells like vomit in my car, so why not bake in it?  YUM) 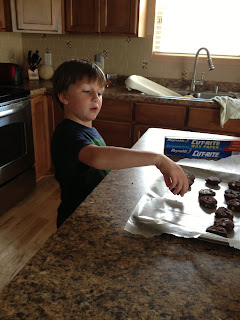 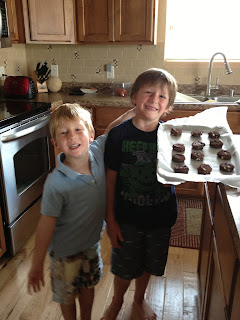 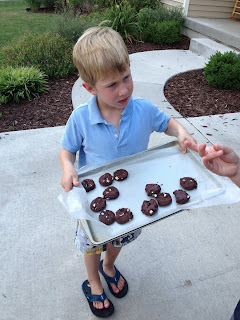 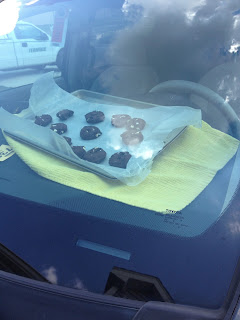 They took so long to cook that Dory outgrew the infant Ergo insert in the meantime (which? SOB) 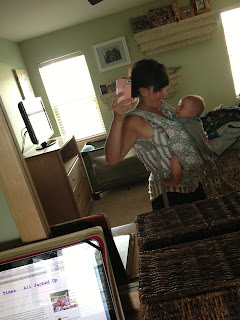 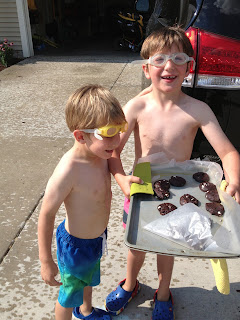 Sprinklers are way less fun and refreshing if you are Ergoing a baby in the dry part of the yard. 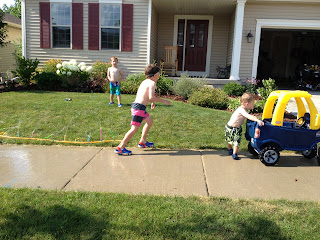 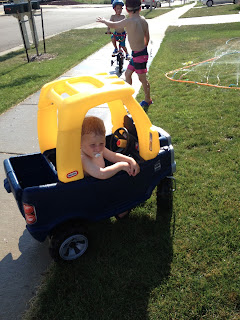 Cooper likes carrot cake so much he eats it with a cake server.  BETTER HIM THAN ME. 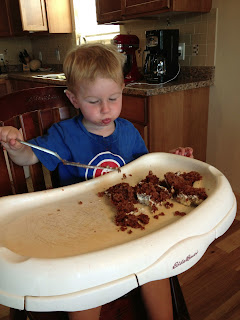 Today was a juggle.  Ben and I both had meetings, and Harry had to go to the doctor.  I took Dory and Harry to the cardiologist and to Subway so H and I could have a picnic in my office.  Then Ben picked up H and D and drove around with all 4 during my meeting.  I met him outside my building and took everyone home so he could go to his meting.  Phew! 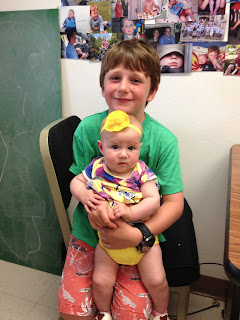 This might be the most adorable picture I have ever taken. 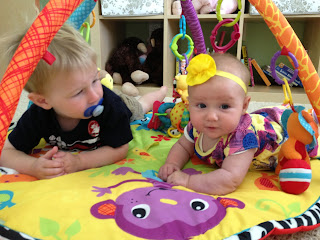 It's a thousand degrees outside (95), so we are going to hunker down in the basement.

I am not going to lie Ben and I are way more freaked out this time around than we were when Harry was in the PICU.  This whole thing was a lot easier to deal with when we thought it would be a one-time occurrence, you know?

Oh!  Ben gave Harry the game ball after baseball on Wednesday (every game, he gives out game balls to the kids who played the best, and Harry has been dying to earn one).  Harry wrote "Harrison" in cursive and then the date ("Juiye 17") on the ball and insisted that Ben put it in a case downstairs with all his other autographs.
Posted by Sarah at 3:05 PM

How awesome that you actually baked cookies in your car! So sorry about the continuing heart worries, but way to go on the weight loss! And that is one adorable baby in a dress :-).

I've always found it difficult to lose weight while nursing (after the initial loss). You're doing great! And with carrot cake in the house! That's amazing.

Sorry Harry's still having trouble. I hope they figure it out quickly.

Sorry to hear about the effusion. I understand how scary that must be. I hope you get some answers soon, and that they are the kind of answers you want.

The baby picture is adorable. And baking cookies in your minivan? You're making childhood magic all over the place. I love it.