with that creamy cheese that melts with ease (sing it with me) Velveeta processed cheese spread is so much fun...

Actually, I didn't use a spec of Velveeta in my delicious chicken and veggie enchiladas, but that damn jingle gets stuck in my head EVERY TIME I even THINK about enchiladas. And that's an oooooooold jingle.

Okay, so here's my recipe for chicken and veggie enchiladas complete with sometimes nonsensical and totally shitty iPhone illustrations:

First, you need a cute little helper who has nothing better to do because his big brother is at school and he's fighting his morning nap because a measly one-hour time change screws him up completely (WHICH IS WHY HE NEVER GETS TO TRAVEL ANYWHERE COOL).

Second, ply said helper with organic smiley cereal snacks and a cup of juice that is so red and terrible for him you might as well save your money on organic food if you are going to feed him that shit, you idiot.

Third, get really lucky and carry your sacked out little helper up to his crib mid-snack 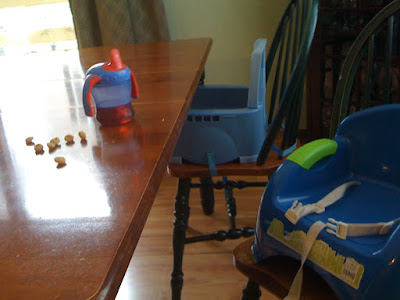 Now you can get to work

In a large skillet (actually, my large skillet is out of commission because it is warped on the bottom and no longer heats evenly because I am a wicked awesome cook, so I just used a medium one, and it was totally fine), cook 4 large chicken breasts (about 1.5 lbs of chicken).

While the chicken is cooking (remember, you want it to be white all the way through, but you don't want it to burn or turn brown on the outside. At least I don't and I assume that everyone is just like me, which, really, is a terrible assumption because I'm weird.), grab a large mixing bowl and dump in a can or bottle of enchilada sauce-- the whole bottle/can (and if you're using a can, use a big one-- I used to always go with Old El Paso, but this week we tried the TJ's version).

To the bowl of sauce, add a halfish cup of shredded cheese, some shredded carrots (I used 3 because that's how many I had in the drawer), chopped green onion, a green pepper or two, a couple of tomatoes and whatever the hell else you have in your house-- I added celery, cucumber, and chopped spinach.

Oh shit! That terrible smell you just whiffed is not the chicken! It's your spatula! Remove spatula from cooktop burner and think about getting a gas stove. 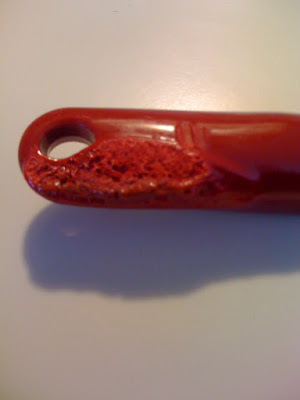 When the chicken is cooked use 2 forks to shred it, add a packet of taco seasoning mix, and cook some more per the seasoning pack's instructions (again, I love the Old El Paso).

Add the chicken to the veggie/cheese/sauce mixture: 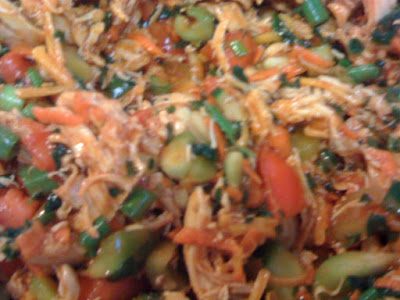 I used to also add Spanish rice, but I am trying to make these as low-cal as possible, so the rice had to go.

Coat a 9x13 glass baking dish with even more enchilada sauce (so we're talking 2 bottles/cans in this recipe, baby).

Spoon the chicken/veggie mixture onto tortillas (I used flour, but you can use whatever tortillas your little heart desires): 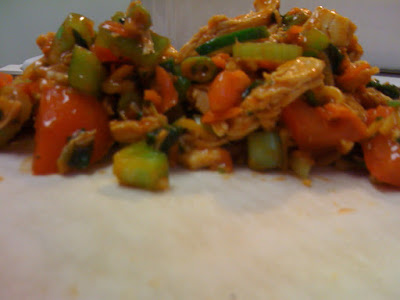 Roll them up, and cram them in the pan (I can usually squeeze in 8) 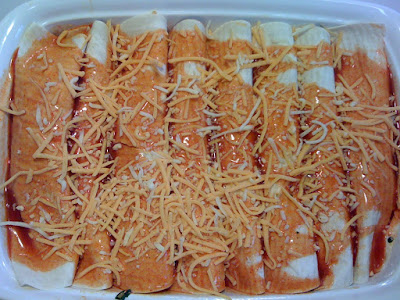 Cover with foil and bake at 350 for an hour. Uncover and give it another 15-ish minutes until the cheese is all melty and you can hear everything bubble. Or until you aren't hungry anymore because you are sort of like a dog in that the smell of cooking food drives you batshit crazy and you already ate like a bag of tortilla chips in anticipation of your meal.

NOTE: This may or may not be wicked similar to the recipe you can find on al Old El Paso can. But I use lots o'sauce and no oil, a huge calorie savings.
Posted by Sarah at 7:05 AM

Thanks for the sharing Sarah! It looks really good. Love the burnt spoon!

I love your "mishap" steps. They crack me up!

I am a pro at the Old El Paso Green Chicken Enchiladas. To cook the chicken, I just throw it in the crock pot and let it go with a can of broth and a can of water for 4 hours. It may not work so well for a single batch, but for a double batch is is less work I think!

I make enchiladas about once per week here. We have switched exclusively to the Trader Joe's sauce and while a little spicy, really good. I should hide some veggies in the sauce -- I usually just take the ground turkey or chicken, put it in the tortilla with a little cheese in each, roll them up, put them in the sauced pan, then cover with the bottle of sauce and the rest of the bag of cheese.

But your way sounds goooood!

I make enchiladas from the Old El Paso kit, but copied your recipe because it sound fun and healthy..you are teaching old dogs new tricks...Bomma

LOL. Every single one of my plastic utensils looks like that.

Great recipe! I can't use the taco seasoning mix, though b/c the sodium would give me a stroke. I have to add my own cumin, coriander, chili powder, etc.

Definitely going to make it! And it's so weird that I've never heard that Velveeta jingle. Also? I dont' think I've ever actually eaten Velveeta. How can that be?