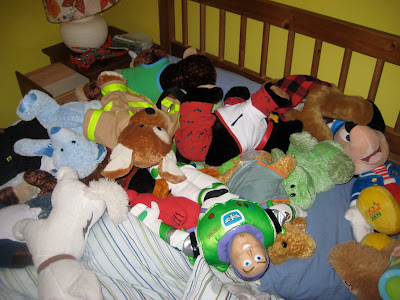 My morning got a rather abrasive start, or, as Harry said when he surveyed the pile of stuffed animals heaped upon me, "Wow! This is intents." He meant intense. And it was-- every time I thought I could almost be comfortable enough to drift back off to sleep, he'd clamber on top of me and smack another animal over my face 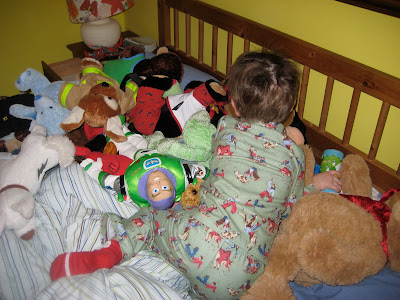 There's my face poking out to say helllllpppp meeeeee. 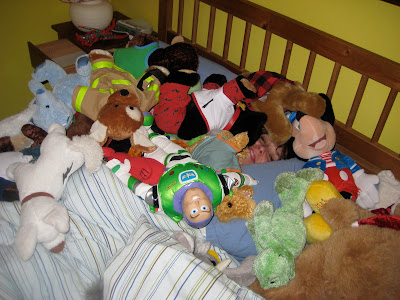 Ben took advantage of the rest of our lovely and creepily warm Saturday by hanging up our outdoor Chrismukkah decorations. Last year, it got too cold too quick, and Ben was unable to brandish his staple gun before the first snow. Harry has been complaining for a solid year about our lack of lights last December, and yesterday when he asked Ben, "Dada, are you going to climb on a ladder and string lights by the chimney with care?" Ben went straight to Wal-Mart to purchase strand after strand after box after box of outside lights. He even replaced the burned-out light bulb in the Harry-sized lawn Santa who has been dim for like 2 years. (and Harry immediately gave yard Santa a hug and a kiss and started rattling off his Christmas wish list. He looked up halfway through and said, "I don't think Santa understands me."

Ben brandishing his staple gun (for which he had to buy more staples mid decorating binge). This picture was taken BEFORE he fell off the ladder that he set up in the rocks next to the house and cut the hell out of his wrist. 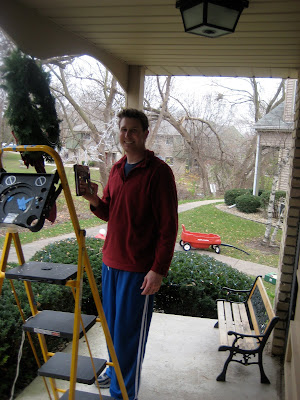 The scare crow is a really nice touch. It really brings out our 4th of July flag, rotten pumpkins, and upside-down tomato growing thing. 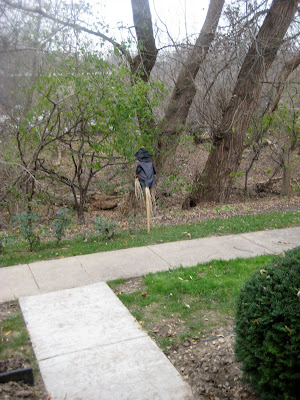 Just think how flipping awesome everything's going to look come Easter.
Posted by Sarah at 5:50 AM

FUN! That picture of you with all the stuffed animals is hysterical. Harry is quite industrious!

No Christmas lights here yet, but I bet we can do a better job than last year when I was kind of hormonal and psycho and wouldn't let Ryan leave me alone with the kids for even ten seconds.

hopefully Ben is okay...between his nose and now his wrist, family life is dangerous..good that you have a mini=Ben to take care of and teach not to do foolish things..like not securing a ladder....Bomma

The great thing about living in NYC is that I never have any occasion to encounter a staple gun, which frankly scares me an inordinate amount ever since I was The Wrestler.

hilarious! Ben bears a striking resemblance to Clark Griswold with that staple gun.

I really had to search to find you under all those stuffed animals. hysterical.

I love the stuffed animal pile-on! Glad you got your stuff up before the snow - which is not something I had ever thought of before since I have never lived in an area what is frozen from Thanksgiving through spring... maybe that is why some people around here decorate right after Halloween...

Glad to see you've joined us in the pre-Thanksgiving decorating!