It's been awhile, huh?

My much maligned washing machine broke on Sunday afternoon, right after completing its third load of laundry for the day-- all of the bathroom rugs and hand towels. We languished without a washer all day Monday, Tuesday, and Wednesday, and I was really happy that my Maytag's last gasp kept us in clean bathroom accessories. At the same time, I was seriously annoyed with myself for stripping all the beds, especially after both Dorothy AND Cooper had uncharacteristic diaper blowouts at bedtime AND nap time two days in a row. ARE YOU KIDDING ME?

Ben mocked my constant laundry ranting on Facebook but you guys! The injustice of the whole thing consumed me. I do laundry EVERY DAMN DAY so that I never have a back log, and then there it was-- a whole laundry room full of yucky clothes and damp towels that started to stink a little.  Also, eitherBen or I is home everyday-- we could have let a repair person in ANYTIME, and we had no qualms about paying to have the machine fixed-- but STILL.  No washer until THURSDAY.

We had the transmission in the stupid thing rebuilt a few months ago (DAYS after the warranty ran out, of course), and the company that serviced it guaranteed the parts and labor, but they couldn't come out to work on it until 9-17.  AS IF!  So I called Sears, but they couldn't come out to even take a look until Thursday morning, which, at the start of the ordeal, seemed like a long way away.

We had a guy come out Monday afternoon, but he was running late and didn't get here until 7.  He was clearly exhausted and also completely unfamiliar with our machine.  He KICKED it a little, could not find the control panel or unlock the lid, and ended up doing an electronic diagnostic that told him the shift actuator was broken.  His diagnostic looked and sounded like him reading his iPhone and swearing under his breath.

I set an alarm for 6:45 on Tuesday morning (because Dorothy comes in my bed and sleeps under my arm like a human teddy bear, which means I am up pretty much all night except for the very early morning when she sleeps deeply until about 7) so I could start calling repair people because a shift actuator seemed like a pretty common part, and I figured SOMEONE would have it on his truck.

A guy came early Tuesday morning and replaced the shift actuator before delivering the bad news that the motor was fried.  He said the soonest he could get a motor would be Friday "with any luck."  I figured luck was not on my side and told him I would just buy a new machine (because Ben and I had a specific figure in mind, and the motor and labor cost a bit more than that number-- we didn't want to pour anymore money into a terrible machine, and I didn't want to wait around until Friday or Monday because the dirty clothes situation was getting out of hand quickly).

But then when I was on the phone with Sears cancelling my Thursday appointment, I realized I could buy parts direct from them, and the nice lady on the phone told me if I ordered in the next 7 minutes, my motor would be on my doorstep WEDNESDAY MORNING! I was ecstatic, ordered the motor, and called my repair guy back to set up a late Wednesday/early Thursday appointment depending on when my motor arrived.

Then I spent   the next 12 hours compulsively checking my email for a tracking number which never came.  Ben and I took turns talking to clueless Sears operators and eventually decided the part would never ever be coming to us (even though we were instantly charged for it).  On Tuesday after school, we ran to Sears and bought a new washer.  OF COURSE the trucks were already routed for Wednesday, so we didn't actually get the darn thing (and by darn thing I mean THE BEST APPLIANCE EVER-- MY CLOTHES LOOK GREAT AND IT SINGS TO ME AT THE END OF THE CYCLE) until Thursday afternoon.  Three hours after the old washer had been hauled away and the new washer was up and humming, my Maytag motor showed up on my doorstep.

And if you think I spent a lot of time complaining about this on FB, holy shit was I just long-winded?!  So you see, FB got the breezy version of this tale.

Cooper's actual birthday was Monday-- he got tons of Daniel Tiger toys-- a big hit! 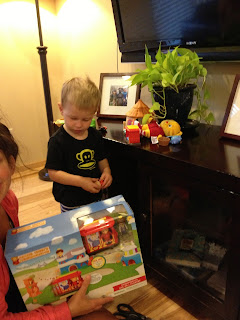 Dorothy is always up for a party 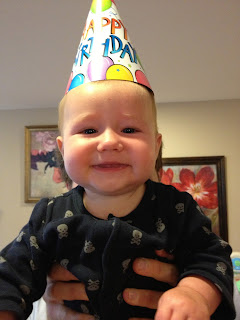 OMG-- so close to being smashed 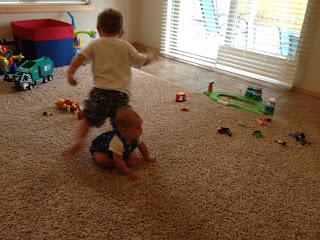 Dorothy can army crawl.  We noticed it the other day in the basement, and then at Little Gym on Wednesday, she made it all the way down the cheese mat. 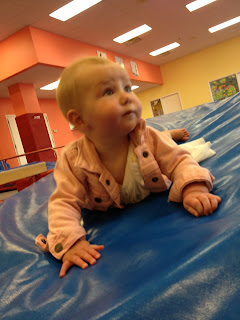 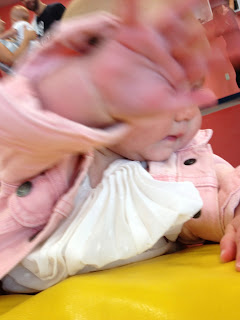 And she got some balls on the BIG! RED! MAT! 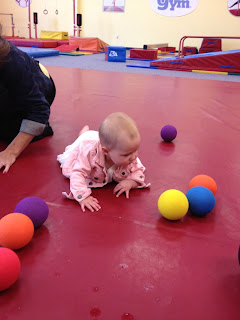 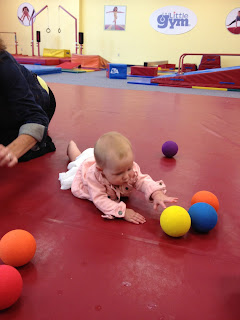 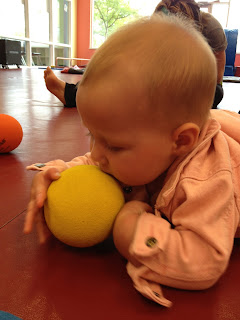 She actually crawls like a seal, scooting on he stomach and leading with her head.  She doesn't really use her arms at all-- it's pretty adorable.

Fall temperatures are on the horizon!  Which means Harrison and Dorothy need new clothes!  (Jack and Cooper are covered up in hand-me-downs). 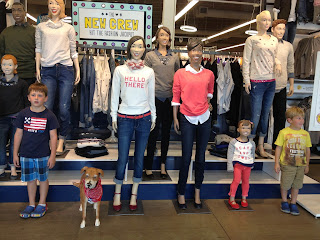 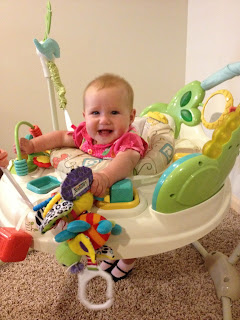 The pile!  I had to go outside to get it all in the frame and still the door blocked some of it.  SO MUCH LAUNDRY! 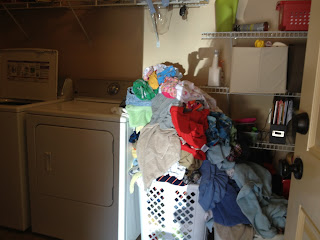 My very own pumpkin patch 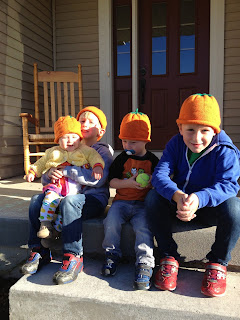 Cooper and Dorothy and I went to Starbucks for my first Pumpkin Spice of the season. Cooper was really interested in the community board above our table.  I think he;s looking for creepy guitar lessons. 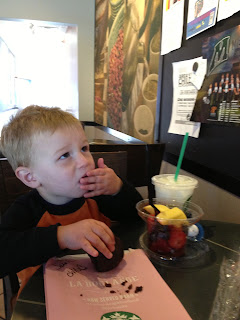 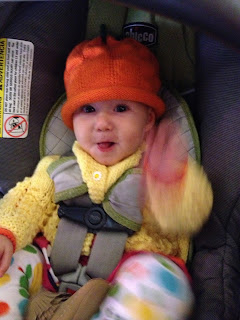 Dorothy is sick-- I think she has the TERRIBLE COLD that Ben has.  She did not go to sleep until after 2 last night and slept fitfully until about 5:45.  Not my best night.

Cooper is kind of freaking out about wearing long sleeves.  He's okay if he can start his day with his sleeves pushed up past his elbow Don Johnson style, and by the end of the day, he is completely fine with them being down around his wrists.  But, he will not wear sweatshirts at all, and he hates, hates, hates his Halloween costume.  Any ideas for getting him to be either a puffy monkey or a puffy dinosaur?  Both involve a sweatshirt like top with a plush hood.   He is fine with the puffy pants, and he wanted to try on the monkey suit to pretend to eat the stuffed banana in the pocket, but then he totally melted down.  He wouldn't go near the dinosaur number after that.  I'd love to hear any tips you have.
Posted by Sarah at 8:17 PM

I love reading your blog and seeing the kids. Loved hearing about the washer. You have an inimitable knack for making crappy crap entertaining! And like the dad at the end of The Gods Must Be Crazy, after all that, you were HAPPY with your new washer instead of left over grouchy. Love you guys! Boo

Eli was funny about costumes one year. Flannel shirt and jeans + toy hard hat = construction worker. Or cowboy hat, same gig.
I wish I had your dedication to laundry. My pile is always enormous and my bath mats generally get washed if someone pees on them.

I tried keeping up with the laundry and lasted for like a week and now I just noticed that I am at least one load behind was like "eff it." So that's that. If our washer broke for four days we'd probably have to be cut out of our house with saws like on Hoarders.

I adore your kids' pumpkin hats!