The other morning, Harry woke up in a heinous mood.

He stomped into our room, yanked back my covers, and wedged his way next to me in the bed-- as is his custom at 5:45-ish everday. Then he grabbed my face in his fat hands, pulled me toward him and said "I waaaant my MILK."

"Okay," I replied, slowly sitting up. "I'll go get it for you." I am as dumb as a bucket of hair in the morning, and I would have done anything to make the whining stop. Padding downstairs to turn on the coffee, grab some milk, and jack up the heat didn't sound too out of line.

Harry burst into tears. "No!" he insisted. "I want Dada to do it. You stay here with me."

Ben groaned himself away and locked squinty eyes with me: it was shaping up tp be one of those mornings when you think you might sell your 3-year-old on the street sometime before lunch.

He cried six more times before we were even out of bed-- once because Jack had the audacity to LOOK AT HIM and TOUCH his PILLOW.

I tried a hundred things to make him happy, but he was unrelentingly terrible.

"How about a smoothie?" I asked in desperation, sure that something that lame would never work.

He closed his cryhole and said, "Sure."

He was so happy to peel the banana and dump in the blueberries that he even let Jack push the "blend" button. Jack was entranced, and the whole time the blender blended, he tried to make the same noise as the machine-- too funny (also annoying until I put the blender on "pulse"-- then it was just funny again) 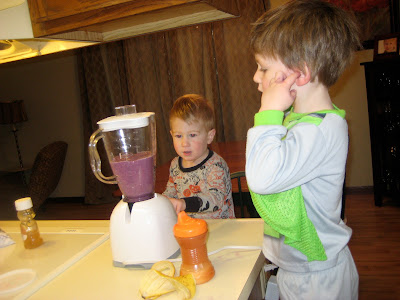 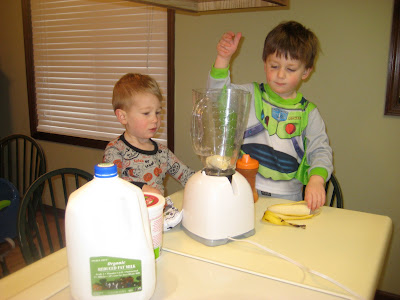 As you might imagine, they are very regular.
Posted by Sarah at 6:22 AM

gSmoothies are a brilliant idea! Aidan is currently on a fruit strike (we'll never know why) but he'll eat anything that looks like ice cream or a desert. I'm going to try this!

Also, I loved the line "locked squinty eyes with me" HAHAHA!

It's funny you blogged about this, because Ebeth has been begging me to make her milkshakes for the past week. I have caved and put her "ingredients" on my grocery list.

Of course, I might have to have one too...

I hate the "Don't look at me!!!" mornings. That sounds pretty yummy though, I don't know why we haven't done smoothies!

Three is such a delightful age isn't it? I think it's funny how crabby Charlie wakes up sometimes, though. Makes me want to give him coffee. I can so empathize.

"they are very regular" hahahaha! so funny. I buy the kefir yogurt drinks and call the smoothies for those days when all the work of mixing and blending and all that jazz just isn't in me. I don't know what it is about smoothies that make even the whiniest kid shut their "cryhole."

okay, "dumb as a bucket of hair" and "cryhole" are fantastic! maybe I need to start making my kid smoothies.