At the office! Doing work! Like a person with a job! 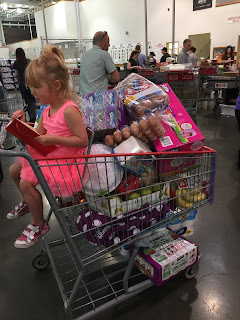 We had a family party for Harry's birthday this weekend, and last week, Dorothy and I dropped Jack at baseball practice (LATE because I SUCK) and made a mad dash to Costco to grab supplies for it and more pool towels because I can always use more pool towels. As you can see from the above photo, we grabbed and ran.  Good thing I had Dorothy to take notes in my Moleskine or we would have forgotten important things like the 2 dozen eggs we needed to break (I mean, clearly we only bought them to destroy them or else why would we throw them in the cart all crazy?)

I am not really a helicopter mom, but for some reason, dropping Jack off at a junior high 15 minutes from our house and running 15 minutes to Costco and back (plus madcap shopping time) made me all freaked out.  I was so worried he wouldn't be there when we got back (LATE because I SUCK).  But, of course he was, and in further evidence of my total suckitude, I got the pick up time wrong and he still had 20 minutes left to play.

It has been cool at night and in the morning here, but my little walking buddy decided about 15 minutes in that her footie pajamas were too warm.  I mean.  Duh. 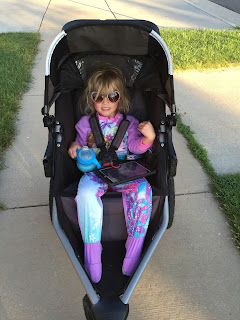 They are total twins. 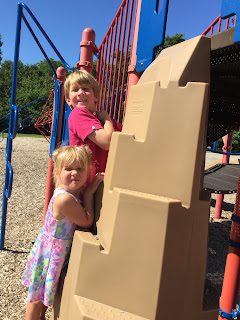 All I do is go to the pool and take selfies in various retro looking bathing suits.  I am super retro tan, too. 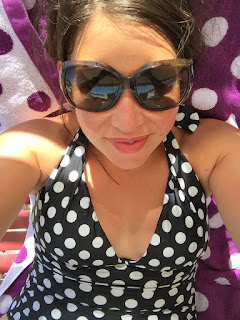 The kids pretty much just eat garbage.  So.  Pretty proud of that. 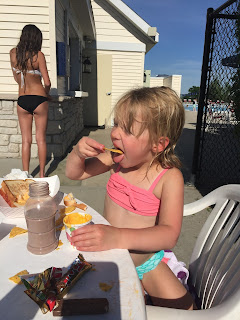 FARMERS' MARKET!  I bought nary a vegetable, but I did get snap dragons, hot and spicy cheese bread, and a magic coffee.  TOTAL WIN. 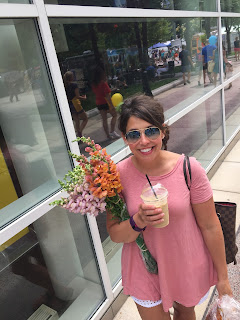 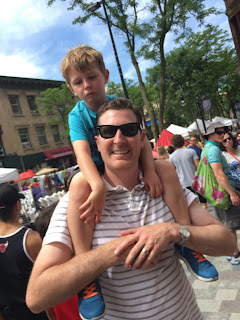 Legs too tired to stand up for a picture: 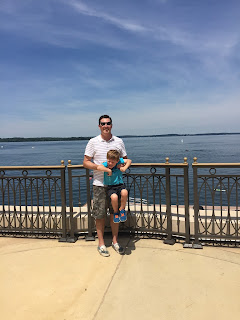 TACOS for lunch.  This was a surprisingly easy and delicious large-crowd lunch-- we had different types of shells, lots of cheese and veggie topping, guac, salsas, etc. and make chicken and beef in crockpots.  Total win.  99% of the time when our families come over we grill out, os we wanted to be slightly different. 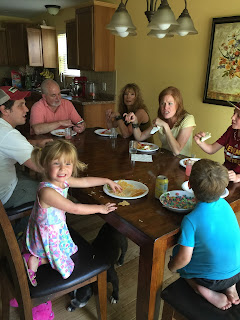 Even Henry liked it! 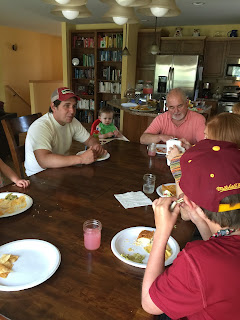 Once again we celebrated Harry being 10, and I am still in disbelief. 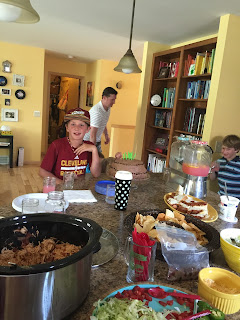 This cake with a double batch of this icing was AMAZING and wonderful and I wanted to make out with it. 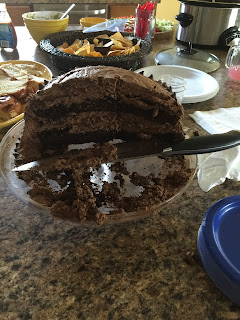 Later we went out for Father's Day 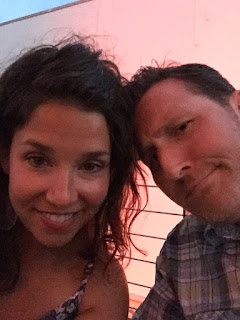 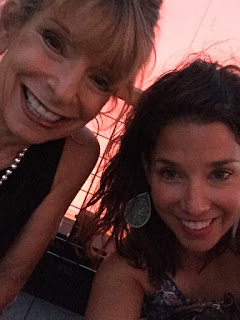 And then Ben slept in on Sunday while my completely hungover self got up to get Jack out the door to go fishing with my dad and brother and haul everyone else to baseball at 8.  Blurgh. 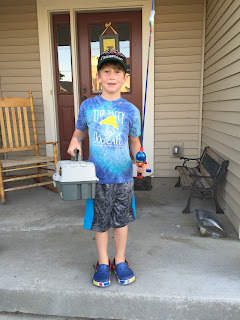 We hit the pool for family float day, and I was pretty excited about using my big swan. 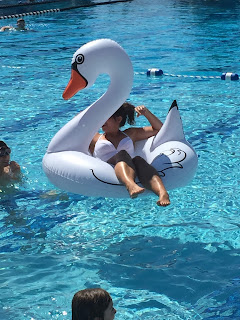 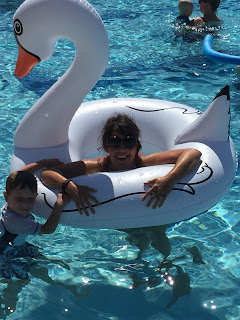 But then the whistle blew for adult swim, and the kids acted like that had never happened before and threw a bunch of tantrums and Ben and I had a bitchy fight with each other, and we all went home before jack and ben and Henry and Desiree could join us, quickly ruining everyone's morning.  We gathered our stuff up quickly, and I tried to flounce to the car trailed by screaming children, but it is really hard to flounce with a giant swan, and I got stuck in the door of the locker room which would have been funny, but I was just so angry.

We finished the day at a lovely barbecue filled with dripping, happy kids and delicious fajitas. 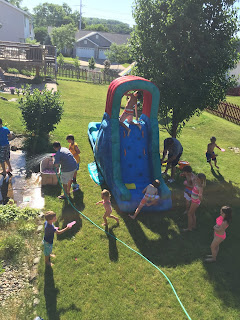 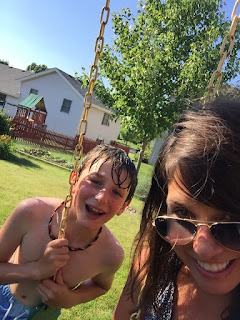 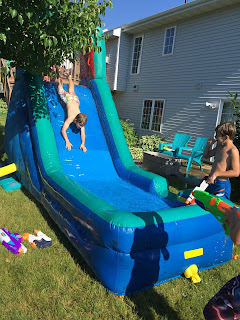 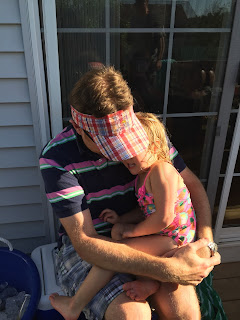 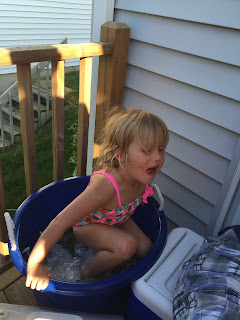 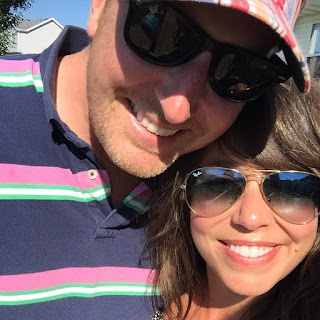 And then yesterday I had to deal with this mountain of laundry, which I gotta say was totally flabbergasting because we did laundry all weekend.  WHAT THE HELL? 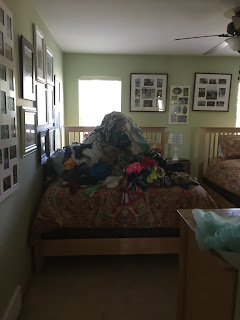 The kids and I saw Finding Dory with friends and all loved it (Harry less than the rest of us-- but it was the first movie that mesmerized Dorothy, so that was relaxing) 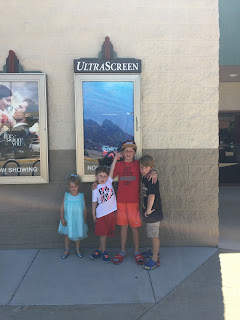 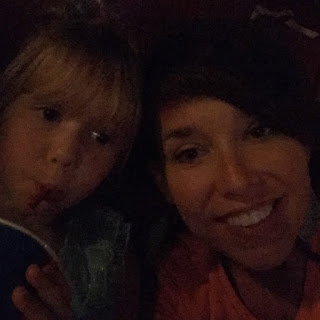 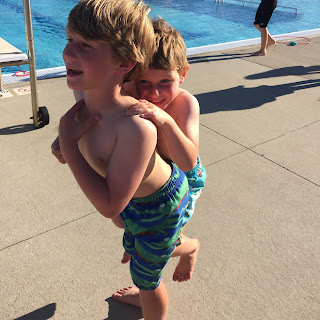 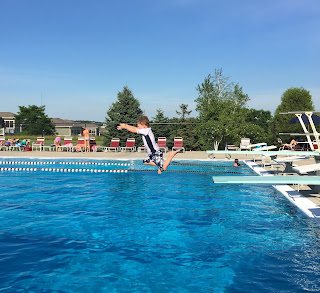 I am off to buy a baseball cap and take a walk around the lake before going home and changing my clothes (along with taking my first shower in a couple of days--erm.) for Cooper's FIRST OFFICIAL TEE BALL GAME.  Adorable pictures to come.
Posted by Sarah at 1:14 PM

I can't believe Cooper jumping off that diving board!! You guys have this pool game on LOCK. And I'm very impressed by your ability to coordinate your retro suits. If you're going to throw a fit carrying a giant swan, you should look good doing it...