On (not) losing it

Yesterday was a red letter day. Yesterday, Ben had a speech tournament on campus, and I was home with the kids all. day. long. He left before they woke up and came home after Jack went to bed, and I took them to the grocery store, and made them 3 hot meals, and played with them all. day. long.

I know what you're thinking: this is a red letter day? She wants a medal for this? I do this everyday!

Yes, I know, totally mundane, and I do it most days of the week, too (although Ben usually is home for the morning scramble and the bedtime routine). But yesterday was different. Yesterday, there was NO YELLING, no timeouts, not threats to take away toys, and no toy confiscation.

In short, I kept my shit together all day. 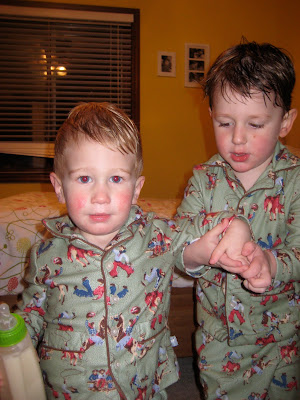 Not really shocked-- I mean it's not like I am usually a raging shrew or something, but we all had a much more fun day because I lowered my expectations.

Like the expectation that they would get dressed at a reasonable time. 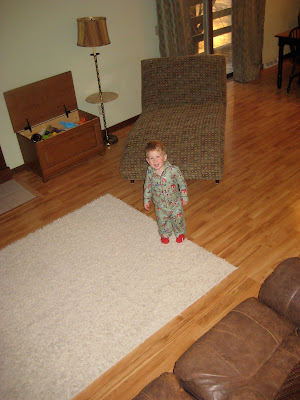 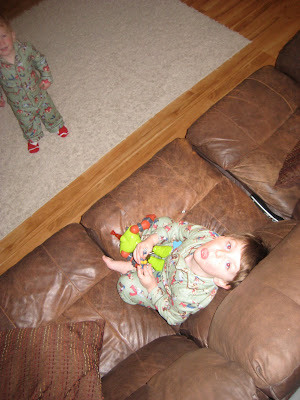 Mostly, though, I let go of the idea that they would play nice, that we'd have fun all day, that my day would be enjoyable and relaxing every second, that I'd be able to clean the house etc.

3 is an interesting age. Harry is so smart and funny but also such a defiant little pain in the ass. I have begun over the past couple of weeks to think that the problem might lie with me and my expectations of his behavior. When he acts out or refuses to listen or is especially annoying, it usually corresponds to my own bad mood, to being yelled at or threatened with toy removal, etc. So I have been trying really hard to not let things escalate at all. I have been using humor to jolly him out of a case of the crabbies even when I want to yell at him for being such an annoying whiner. Instead of asking him to do something that he is just not going to do (pick up the giant mound of blocks in the middle of the room, go get his own cup if he wants a refill, stop jumping off my bed-- things that have in the past devolved into awful power struggles where I end up yelling and Harry ends up acting more and more frantically annoying), we do it together from the start.

When he screams this loud, ugly, earsplitting scream every time Jack looks at his toys (and he does this-- or did it-- a lot), my first impulse that I usually gave into was to yell, "Stop screaming!" Ironic, huh? I have found (and this is not rocket science, so feel free to roll your eyes out of your head) that a nice, pleasant, "Use your words," actually works better! He calms the fuck down and asks Jack really nicely to go away and leave him alone, and JACK DOES.

Sometimes my first response is to yell, and I have to bite the inside of my mouth or take a huge, deep breath. Sometimes my knee jerk reaction is a timeout , but really? I think timeouts are ineffective as a punitive thing and better as a time for calm reflection and getting your shit back together. So I take them for myself-- I put the gate up at the entrance to the boy' room and brew a cup of coffee an drink a few sips of it and just chill the heck out until my 5-minute timer goes off.

I am not perfect-- far, far, far from it, so far that perfect is all the way across the map, so far away that with my paralyzing fear of flying, I know I'll never get there.

There are all these articles going around about how yelling is the new spanking. It's totally taboo to spank, so parents yell instead, is the argument (which I think is flawed on several levels). We are a no-physical punishment house, but we have also seen how ineffective timeouts, yelling, and threats can be. These new anti-yelling articles claim that yelling causes irreparable damage to a child's psyche, and this is probably overstated as well. And all of these articles are written by medical men whose children are probably being cared for at home by their wives while they luxuriate in their child-rearing expertise. And is there yelling in these homes? I don't know, and neither do the guys who wrote the articles, probably because THEY"RE NOT THERE dealing with small obnoxious children all damn day. Reminds me of a story a women's studies professor used to tell about being a neighbor of John Rawls, who hung out in his office writing about justice as fairness while his wife did the work of raising a passel of Rawlsians, instilling them with the tools to build the comprehensive moral doctrines Rawls theorized.

Anywho, it's been about a month of looking at parenting differently, and I credit the introspection provided by NaBloPoMo for a jump start. I'm actually really proud of myself because I have been seeing the beauty and the comedy in almost every moment. Like yesterday at the grocery store when Harry head butted me so hard in my down-theres I almost puked. How lovely. How funny. How droll. I have being trying to be a better, more fun, more patient mom. There's been a lot less yelling, more laughter, less behavior problems, and more silliness all around. 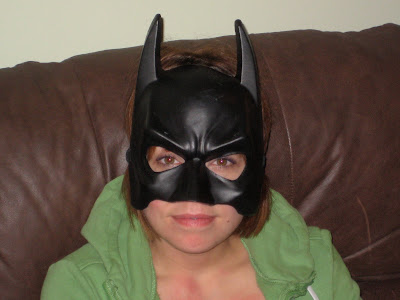 Baby steps.
And if I am going to go apoplectic with rage, foaming at the mouth and screaming obscenities while the veins in my neck and temples bulge (an exaggeration), it's when I am getting them dressed or when we're trying to leave the house with all of outr stuff. Any tips?
Posted by Sarah at 6:51 AM

No tips, but this post made me feel better about the little criminals I live with. Charlie sounds EXACTLY like Harry! Spooky.

Glad to hear yelling hasn't worked because I am ramping up to a lot of yelling as the THREES take hold. OMG.

Oh. my. god. with the whining - Blake is turning 3 in less than a month and it has already begun and I sometimes wish I was deaf so I didn't have to hear it! I try not to yell and sometimes whine back at him and that usually makes him stop (because he's laughing or because he doesn't want to listen to me whine because oh. my. god. it is annoying!).

I really think having low expectations is key, haha!

But seriously, we're in the same boat. Fynn scrams at his sister all. day. long about everything. "Dont' talk Paige!" "Don't say duck, say pick up truck!" "Don't touch my toys!" Ugh. It makes me mental.

But deep breaths help. And wine. Lots and lots of wine.

Ask me how I know. I'll give you a hint: we just figured out our Xmas travel plans to see our families.

Somehow parenting alone on the weekends is WAY worse than during the week. Not sure why.

As for the yelling, I agree that it's a good thing and also that it is hard! I mean what else do you do when the 3yo purposely pushes the 1yo off the couch on her head for eleventy billionth time that day? Tis a dilemma...

I have found that when I want her to behave so I can get a lot done - it doesn't happen. She wants my attention. But, when I just let the day unfold I normally get just as much if not more done. But then again, I don't clean my house nearly as much as you and I only have one to this point...

thanks for this. I've really been trying to stop the yelling myself - I just don't want my kids to remember me as yelling all the time, even though I probably don't actually do it that much. The guilt afterward just makes it so much more awful, you know? And of course, it is too true that they behave so much better when we just back off a little and relax. i use time outs for my kids when they need to calm down, and I am starting to remember to give them to myself as well.

Yes. Yes to it all. I try to also think about "why" I'm saying No. Is it because I don't want to deal with whatever they are trying to get me to do? Am i just being lazy? Usually, the answer is YES, I am being lazy. Lazy works for me. So, I'm trying to watch my No's. And to not get so frustrated so easily. Cause, seriously (especially with Elisabeth), they're good girls.

I think I need to take a page out of your composed book. I have been trying to buy a lightbulb -- a lightbulb, mind you, not a nuclear fusion machine -- for a whole week now and have not been able to manage it. Either the 2.5 year-old is having a meltdown so insane strangers shoot me looks or she's taken my wallet out of my purse unbeknowest to me and hidden in somewhere in the house. Either way, I've been a-yelling. And nothing makes a parent feel more guilty, huh? Who would have thought not losing it would be so hard?

I love everything about this post. Especially the super hero picture of you at the end.

thanks for letting me know I'm not alone! LOL