I felt like I was doing complicated math looking at our menu ideas and our hockey schedule.  I think I figured it out, but when you have hockey every night and a tournament over the weekend, dinners get hairy.

Sunday:  It's just me and Dorothy for this one because she and I have a birthday party in the afternoon, and Ben is taking the boys to Harry's hockey game.  They'll eat on the road on the way back, and we'll have my current obsession spinach and cheese quesadillas with tons of salsa and chipotle ranch dressing from Aldi.  Also a million cuties. (Ben will spend around $30 at Culvers, and we have all of our ingredients already.  So that's $5/person)

Monday:  Hockey from 5-6 and then again from 7-8.  So, I think I will make chicken noodle soup in the slow-cooker with French bread, apples, and brownies.  This is cheap and easy and can be eaten whenever ($29 because I am low on chicken stock and brownie ingredients again, about $5/person)

Tuesday: Ben works until 5-ish and the kids have hockey at 7:20, so we have an actual dinner window! Oven BBQ chicken, green beans, rice pilaf, apple crisp with vanilla ice cream ($24, or about $4/person)

Wednesday: Chili and hot dogs, veggies and dip, all eaten at 6:30 AFTER hockey, which guarantees and afternoon of sullen children.  CAN'T WAIT. (about $30 or $5/person)

Saturday:  Breakfast for dinner ($20 for blueberries, buttermilk, bacon, OJ, tube cinnamon rolls, and syrup, but we'll have everything else-- around $5/person because there's only 4 of us).

These PW stuffed bell peppers look good, but nobody liked them but the dog.  Probably will NOT make them again. 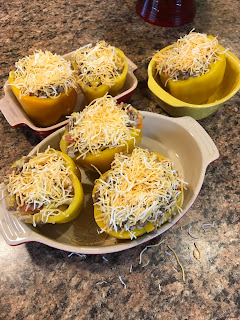 I don;t know what happened, but I had the bread machine fail making a loaf of whit bread.   threw the stuff in there super fast on my way to dance, so maybe that was it but when I tried to cut it, this happened. 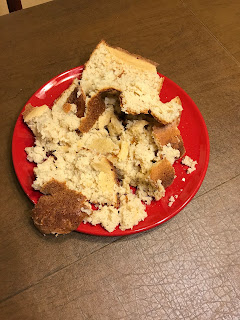 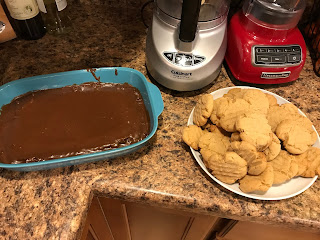 I added so much pureed spinach and zucchini (bright green) to my spaghetti sauce that the whole thing turned brown.  SO GROSS.  But it tasted great!  If you closed your eyes! 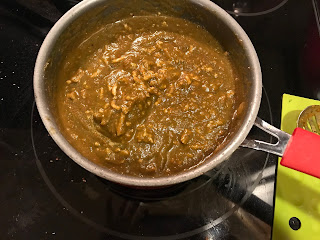