My Mac startup disk was full, so I assumed, of course, that it was full because of all my pictures.  So, I thought maybe I should back it up-- because it keeps telling me that it has been like 800 days since my last backup-- and then delete some stuff.

The reason, though, that it had been two years since my last back up was that I hate all things associated with backing up my computer and my pictures.  Which is so strange, you guys, because I love my pictures and have them in the cloud, on my hard drive, on another hard drive, at Walgreens.com, on my blog, and on Google.  I mean.

Anyway, it just wouldn't work, and I tried and tried and tried.  The computer didn't recognize my backup disk, and I couldn't figure out why but was pretty sure the disk was corrupt and all my pictures were gone forever.

Finally, I emailed the computer guy in my office, and sent him a screen shot of the error message I was getting.  And the screen shot was blank.  He emailed back right away to tell me that.

I told him I ran a scan of the hard drive to make sure it still worked (of course I did!) and that it had plenty of room.  He said I should turn Time Machine on and off try to re-select the disk. I emailed back right away to tell him I tried that, but it was grayed out and that turning Time Machine on and off did nothing.  I included actual screen shots that time.  And then he wrote back to tell me that I had to UNLOCK Time Machine to make changes to it.  (Which I did to turn it off and on but didn't do to select the disk). So I did that and it worked and I wondered if there is anyone in my office who is worse at this stuff than I am.  I bet not. But seriously.  One click of a button, a password, and another click of a button and my problem was completely solved.  SO ANNOYING.

And then!  I looked at my computer storage and found it was all "other" that was taking up all the room, so I deleted a bunch of cache folders and emptied my trash and bam!

That was literally what I did with my only free time of the day yesterday.  I didn't read a book or work on my novel or think about answering course emails or dust anything.  And you know what? It was SO STRESSFUL.  And I was also stressed about the time wasting.

Because!  I am not working yet, but the kids are back to school and Ben is doing his online adjunct work, and I just sort of walk around and clean up everybody's stuff and get interrupted a million times a day every time I try to do something for myself and have to be OK with it because I am not really doing anything anyway.

I know as soon as I figure it out and get into a routine, it will time for me to start the semester, and I will go into another tailspin.  So, I am FOR SURE looking forward to that. 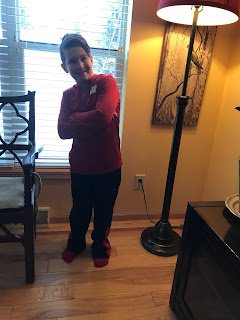 Made brownies and used this icing, and you should, too.  The kids ate all the edges, and then I had big plans to devour the rest with a fork and The Crown, but I just didn't.  WHAT'S WRONG WITH ME?  (I did eat a giant one at dinner, though). 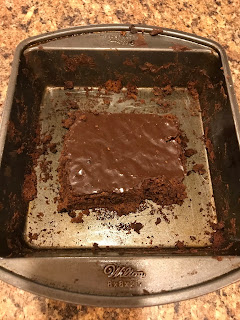 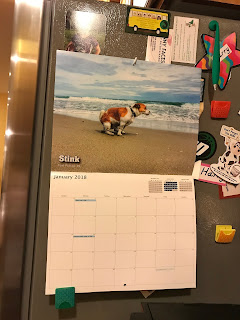 I needed to corral Dorothy before school, so I painted her nails, and she was SO STILL waiting for them to dry. ** insert evil laugh here** 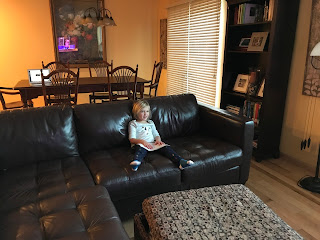 Then after school, I asked her what she wanted to do, and she said eat M&Ms out of her fancy bowl (my Pioneer Woman measuring cups) and watch Sing  again and again and make cookies. 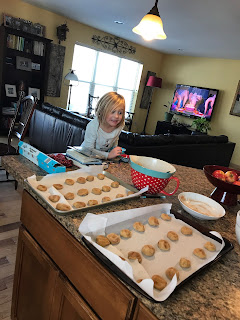 We used this snickerdoodle recipe, and it was amazeballs.
Posted by Sarah at 6:00 AM