All right.  Listen.  We all know that I have totally effed up NaBloPoMo, but you guys.  I don't even think it's a THING anymore, and it;a not like I put up a freaking button.  So what I am going to do is go back and post-date everything so it looks perfect. And if I hadn't written that, you'd never even know.

Also, I know that Tuesday and Wednesday are not weekend days, but you guys.  Go with me here.

Ok, first of all, FACEBOOK IS MAGIC.  I posted that Target was out of gravy boats, and a couple hours later a friend texted me and said she was at Marshall's and should she drop one off on her way home.  MAGIC. 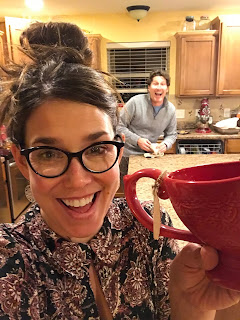 Also magic?  These green beans (but I used a can of fried onions instead of my own because DUH.  Also, when the recipe says a cup of parmesan cheese, I use a BAG.  This is generally always true. 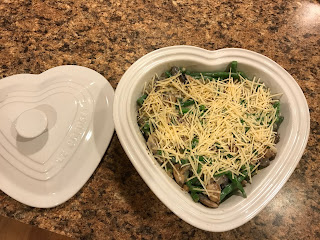 I made all of the things on Tuesday night, and I should have known that maybe it was not going to be a night of good cooking karma when the first thing I did was let this pot of sliced sweet potatoes boil all over the damn place.  This is especially a problem for me because water stains the shit out of my cooktop, which, honestly, is something I should have known BEFORE I BOUGHT A COOKTOP. (I made these like Ben's mom does, and they are both candied AND baked with marshmallows, but I cannot find a recipe to link to-- suffice it to say they are amazing). 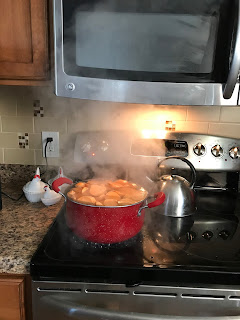 Tuesday night/Wednesday morning,  I also made stuffing, beet salad, no-bake chocolate cherry cheesecake (I thought this was my mom's recipe, but I was wrong, and it wasn't very good except it's still pretty good, and I will probably eat the whole thing, but next year, my mom needs to make the cheesecake), pumpkin pie, pecan pie, and chocolate pie, plus Ben's famous cheesy potatoes (no recipe because that stuff is family legend).

I should have stopped for the night around 10 when I broke my graham cracker crust all to shit and had to halt my cheesecake assembly.  But, spurred on by the fabulousness of all the side dished cooling on the counter in my entire collection of casserole dishes and the totally perfect pumpkin pie I had just taken out of the oven, I pressed on.  AND LIT A PECAN PIE ON FIRE IN MY OVEN.  I dropped it pulling it out to take the foil off for the last 20 minutes, and the filling splashed everywhere.  I had just self-cleaned the oven in preparation for all the cooking, so I was like oh shit, I need to take this out and wipe up the spill in the morning and make a new pie.  But Ben, who loves pecan pie, was like no it's fine, just keep going.  DISASTER.

We didn't want the smoke alarm to wake up the kids, so we stood there fanning it with towels for the whole rest of the fiery cook time.  And then!  In the morning, I had to re-self-clean the oven, which put a damper on the baking schedule and made the house smell like shit.  So I burned incense, which almost killed Ben.  Also, the pie tasted like hell.  Burned hell.  So.

But!  We took a break from all of the ruining to podcast.  You can listen to us interview state superintendent of public instruction and potential Democrat candidate for governor Tony Evers here.  Evers is great and would be an excellent governor, I think.  Also, he met his wife in kindergarten, and they have been to the state fair together 51 years in a row.  I LOVE THAT. 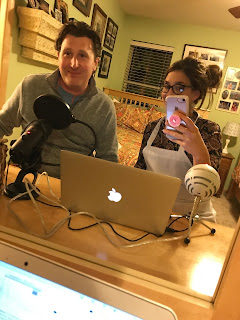 Wednesday morning, I attempted to scrub the oven (NOPE) and steam clean it (NOPE again, but this is a really cool oven feature that I never knew existed).  While I did that, Dorothy and Cooper opened Hershey's Kisses for a batch of peanut butter blossoms.  Then I gave up and cleaned the oven and took the kids to meet a friend by the lake so we could exercise the children like the pack of labs they are.  I took Beatrix and had to leave early because a simple walk in the woods made her barf up foam). 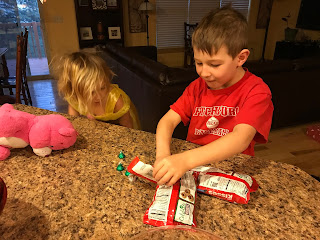 Happy kids!  Who were well behaved for the rest of the day! 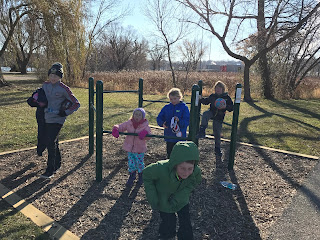 I only had the fun stuff left to make on Wednesday-- chocolate pie, Cinnamon rolls, and peanut butter blossoms. 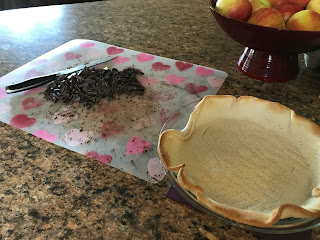 I truly love these rolls, but the recipe makes so many that I eat myself sick and then don't make them again for like 5 years. I realize I could cut it down or gift them to friends, but what can I say?  I am a glutton. 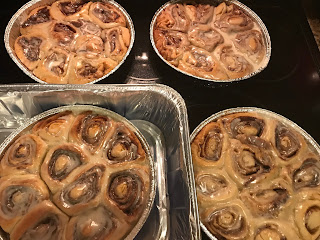 My parents brought us a handle of Tito's.  And we also bought one.  What can I say?  We know ow family holiday gatherings go.  (Also I am a terrible hostess.  My parents came over at the exact moment I was stirring the chocolate pie filling, so I couldn't even greet the or help them store the food and serving dishes I made them bring a la Marney. 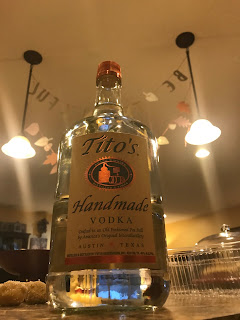 Dorothy and Cooper helped me finish up with festive headgear, 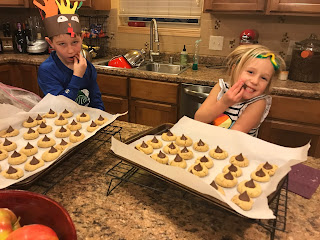 And then we all had pizza (wings, pretzels, grilled cheese, burgers, salads, etc) at the golf course bar 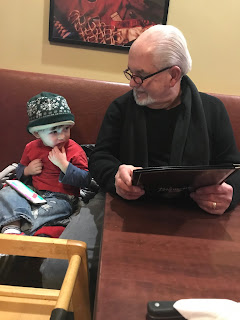 Dorothy had a Sprite because POTY 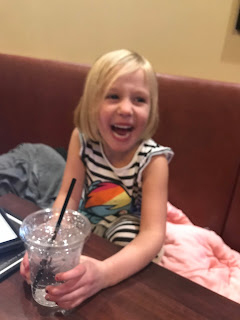 So tired!  So relieved to be done cooking!  Ben even brined his turkey. One of his turkeys. 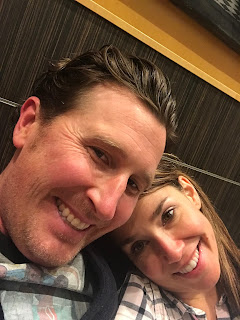 My parents stayed in the kids' favorite hotel, so of course we crashed the pool.

I did not bring my suit and instantly regretted it because I love hotel hot tubs. 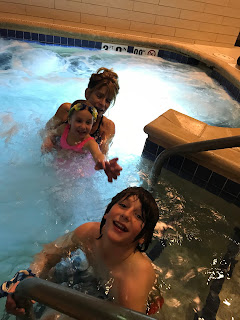 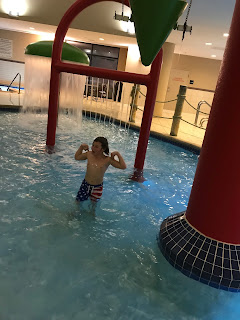 I took a picture of him jumping off this baby slide before I told him to stop because MOTY. 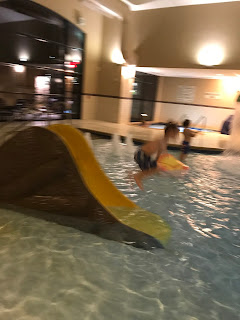 And!  Bonus!  My parents brought what might have been my very first speech trophies from college.  Ah, memories. 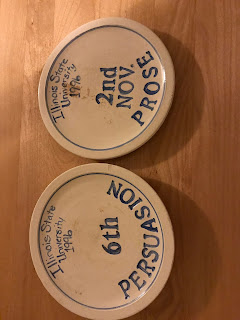