Last Sunday (the 8th), Dorothy threw up in the middle of the night.  We were not shocked because 2 kids were absent from her preschool class on the previous Friday with a stomach bug, and she only puked once and then just sort of laid around for a couple of days without much of an appetite.  It was NBD.

But then on Monday, Harry started having chest pains and felt crappy, too.  He didn't ever throw up, but he did have to go to the cardiologist for an echo and a check up (he's OK-- he caught it before fluid could accumulate, but he's on a ton of ibuprofen to reduce inflammation and will keep taking it until he has been chest pain-free for 24 hours... still waiting). 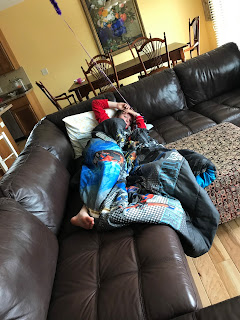 We sort of limped along last week, having ice cream 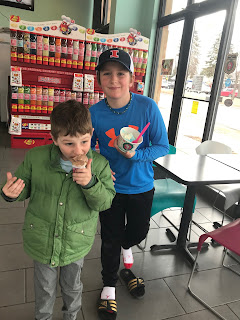 and checking out new libraries. 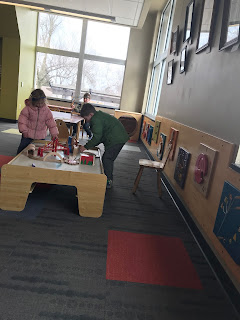 We surprised Jack with an early birthday present of autograph tickets to the Packers Tailgate Tour and a new football for them to sign. 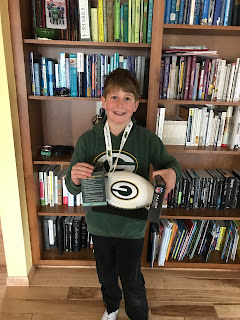 I took lots of selfies.  It was a pretty normal week. 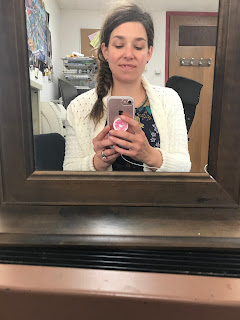 Dorothy, and Cooper, and Jack and I took advantage of Dorothy feeling better and elementary school early release to go to a new automated McDonalds (look, it doesn't have to be like this.  We do not have to assume that robots should just take all of the jobs) and hit up the zoo. 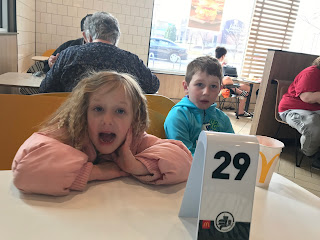 As usual when we round the bend where the seals used to be (now there are porcupines in there and no water, duh), we reminisced about the old rhino who died of being 44 (suuuper old for rhino in captivity) a couple years ago because rhinos are my very favorite.

And Jack and I were like who the what now?

And then we saw him!  A brand new LIVE rhino!

(He moved in in May, but we haven't been to the zoo in awhile and now that Trump is president I don't/can't watch the news anymore, so I miss whatever The Atlantic doesn't tell me, and they didn't tell me about Harmon!) 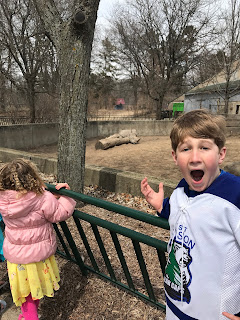 Dorothy rode on the giraffe on the carousel instead of sitting on the bench the bench, a huge upgrade for her, and she was, she told me, only a little scared. 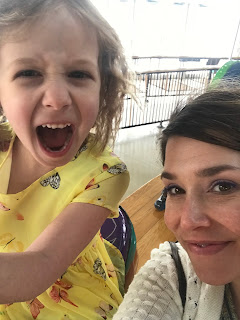 Then the kids rode the zoo train without me, which was MAGICAL. 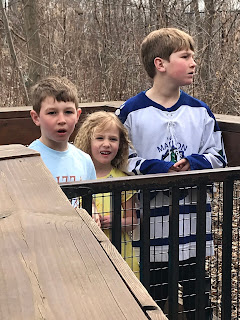 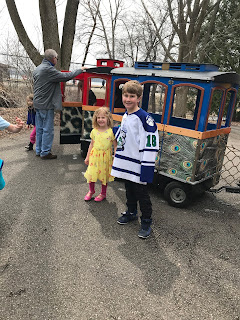 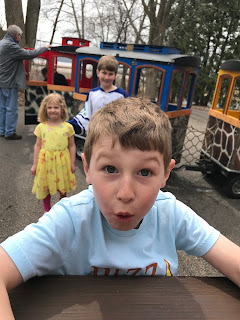 We followed up our trip with some Orange Leaf, and I dropped my change in my yogurt and almost ate a penny, which struck Cooper as HILARIOUS. 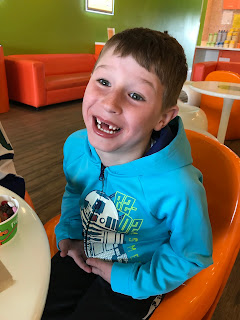 We went to the library to pick up some books on hold, and Cooper told me he had a headache and then he just went down-- totally sick and miserable for the next 24 hours. He never puked, but he complained of a stomach ache, headache, and body aches and never left his pillow except to climb in bed with me and kick the shit out of me until I woke up totally sick and nauseous at 4 am. 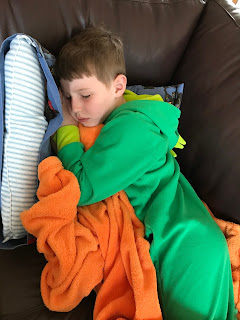 Then, the next day, I was OUT, too.  Vomiting, fever, body aches, restless legs, horrible headache.  I spent the entire day in bed and couldn't even read a book-- that's how shitty I felt.  Holding a book and turning the pages was way too much for me.  I watched The Office on Netflix and moaned and after like 14 hours could stomach a popsicle. 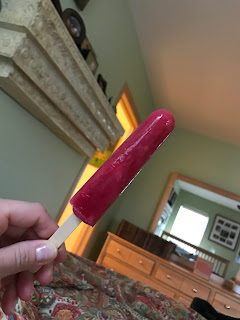 I woke up the next day feeling about 80% and planned to have some tea and toast and take it a thousand percent easy, but then I saw this: 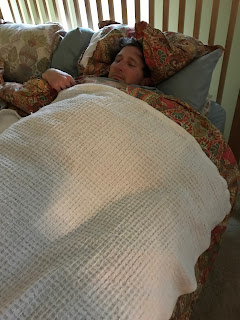 So, since it was a Saturday and all the kids were home and Ben was wiped out, I got my shit as together as I could, and we had a really fun day, actually. 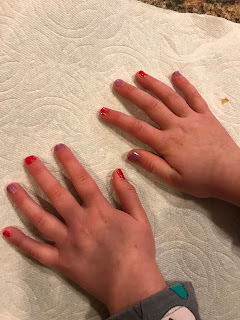 Dorothy had a birthday party at a trampoline park, so I dropped her off and then paid for Harry, Jack, and Cooper to bounce for a couple of hours. I read a book.  It was nice.  Except the book is horrifying. 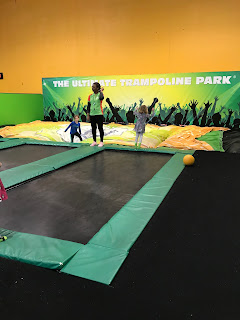 The boys were just hanging around. 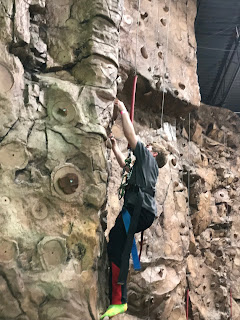 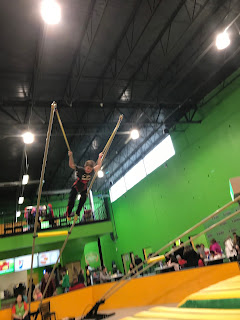 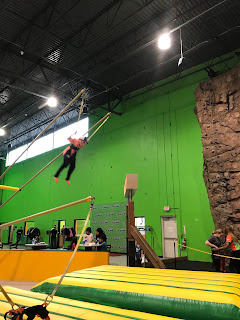 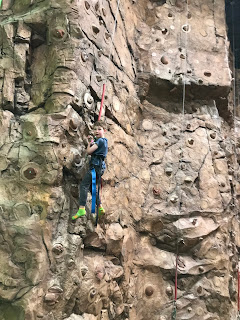 Then Jack had a birthday party, so I dropped him off and took everyone else for pancakes. 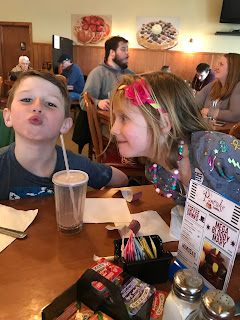 We went to Super Target and Aldi, picked Jack up, hit the video store, and went to yet another library where Dorothy's class art project was on display. (And this whole time the groceries were just in the trunk because it was only like 20 degrees!  In April!  Bonus!) 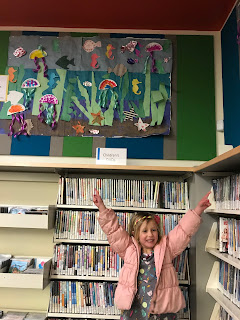 (Moments before I snapped this, Harry was playing with this toy like a kid-- it was so cute) 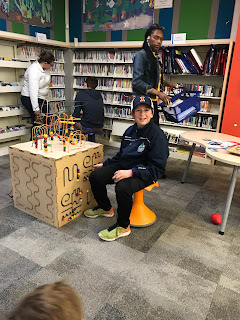 Then we trolled the mall for a little while, and Jack picked out this outfit to wear on his birthday, but it's snowing, so no dice. 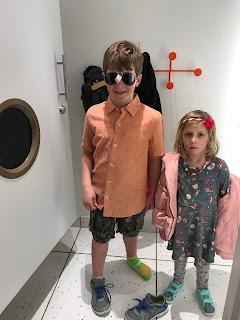 On the way home around 6, we called for some pizzas and had a perfect little movie night. 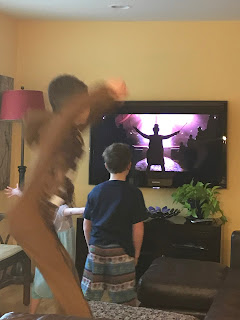 Basically, I am THE BEST WIFE EVER keeping the kids out of the house for 8 hours so Ben could die from the world's worst virus.  He felt OK on Sunday, and we soldiered through Jack's birthday on Monday even though neither of us had the energy for Dave and Busters.  Sigh.

Jack is the last man standing, so I expect projectile vomiting any second now.
Posted by Sarah at 6:00 AM