Yesterday, I solo-parented from the time all 3 little cherubs opened their blue eyes between 5:45 (Cooper) and 6:15 (Jack) until the last one (Harry) went to bed at 8:30. Normally, that kind of a day would leave me stressed out and stress eating, but when Ben came home from class? I was happily enjoying my second work out of the day and thinking about the snack of Wheat Thins (since our last Costco trip, all my snacks begin with Wheat Thins and will for awhile) and a honeycrisp I was about to enjoy. I didn't call him to complain about the kids a single time, and I even raved about how wonderful they were until Ben actually got bored hearing about it. Super Twilight Zone.

I think I figured out the secret to my at-home happiness: make a huge to-do list and get everything done. Also send at least one kid to full-day school.

Seriously, I always loaf around eating too much when I have 14 hours of kid-time stretching in front of me. Yesterday, I did a ton! hen Cooper woke up at 5:45, I started to just feed him lying down like I normally do, but I realized if I sat up and grabbed my pump, I could get that out of the way before breakfast. Check. Then, I worked out before we walked to school. Check, again. After drop-off, I let the TV babysitter hang out with Jack and did a ton of actual work on my computer. The TV babysitter hung out with us on and off until lunchtime, with plenty of Jack playing happily beside me and Cooper and his Boppy hanging out on my lap with my computer. And I squeezed in a viewing of last week's Too Fat for Fifteen between spring course prep and a ton of emails. Check and double check. After lunch, Jack bundled up and went outside to play, and Cooper took a nap in his swing while I cleaned 3 bathrooms. Jack came in and helped me fold some laundry (3 loads, which sucks because I do laundry everyday-- how do we end up with so much? Usually it's only 1 or 2, but a couple times a week, our whites accumulate into a load, and I spend a few minutes matching small and tiny socks. But since laundry has become a regular part of my day, I maybe spend 15 minutes tops on it, so I shouldn't complain), and I got dressed and did my hair and makeup. By 2:00, Jack and Cooper (who pooped through one outfit and puked through another) were both having a snack downstairs, and I had literally nothing else to do and no to-do angst.

We picked Harry up from school, and spend the rest of the afternoon and evening until 6:45 bathtime began doing nothing. Playing silly games, laughing, trying to see who could make Cooper laugh the most (Harry). I Googled myself. Harry perused the latest issues of my alumni magazine. Jack took a snoring nap sitting up on the couch.

I cannot believe how relaxed and yet accomplished I felt by the time Ben got home. I also decided that by the time the kids are pubescent, we need a bigger house because I don't ever want to enter or maintain their bathrooms. Ew.

These were the only pictures I took today (and they are only 3 of a series of shirtless couch pics): 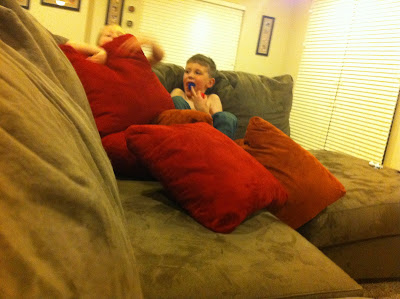 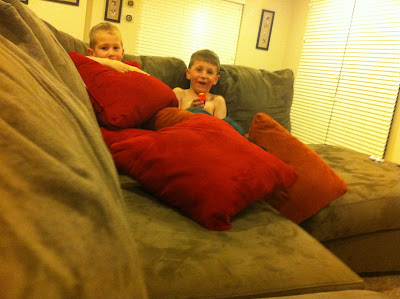 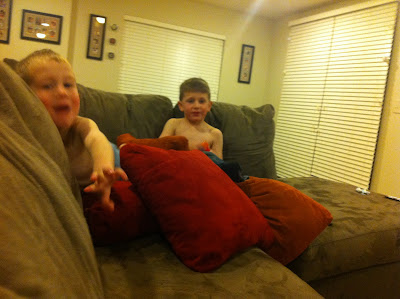 What a GREAT day! You inspired me to go tackle some of the clothes that need to be folded and you're right, it's great to actually feel accomplished at the end of the day. Now if only I could get work-work done during the day...

Also, I need to get some fall color fabric to cover my couch cushions because yours look fabulous!

verackyu are an inspiration to me...I did make a list, it feels so good to check things off..so far another 17n matzoh balls for the freezer...Bomma