As long as all the kids are up by 7, we might as well go out for breakfast when there are NO LINES

He looks like a pocket full of sunshine, but holy cats he was loud. We had to tell him like 65 times to use an inside voice. Notice we don't say use your inside voice because HE DOESN'T HAVE ONE. 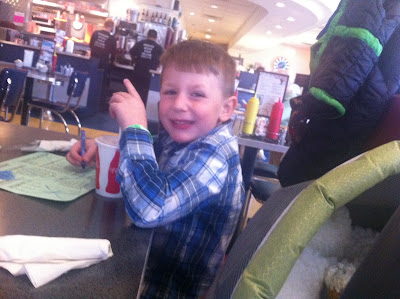 Such a good baby. He was sleeping so soundly that I left him in his carseat even though carrying him around in that thing goes against my parenting philosophy. 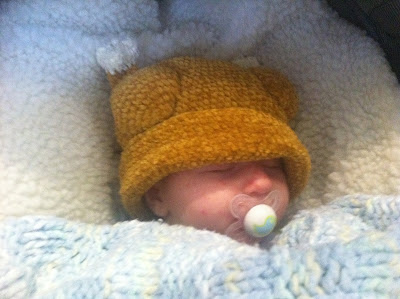 Such a good breakfast eater. He ordered his own food (french toast and bacon) then stole Ben's biscuit and my pancakes and ate them all. 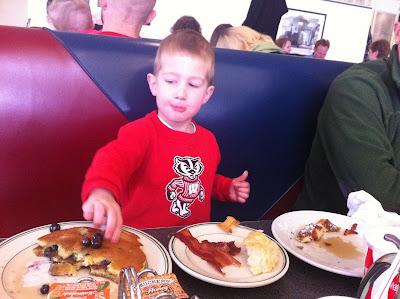 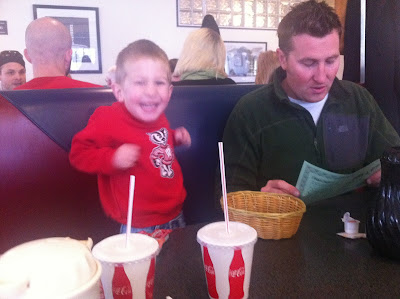 Breakfast was the high point. Harry and Jack were horribly behaved for the rest of the day. Harry could not stay off the floor at the grocery store. Jack kept sticking his hands out of the cart and grabbing stuff, and he cut his fingers on an apple sign. At the mall, Jack tried to eat a mascara at Sephora. Harry whined until our ears bled. Jack climbed through racks and tried to destroy clothes at Ann Taylor. Just generally terrible. Like they've never been in public before. Also, I looked cute at breakfast-- sweats and a messy bun but actual make up! But by the time we hit the mall at 4, my sweats were sad and my bun was really, really, really messy. Not mall material for sure.

We spent most of our day trying to occupy the kids so we could sneak upstairs and watch the last Harry Potter movie. It's that good.
Posted by Sarah at 9:26 PM

Good times! Why are 5 year olds SO LOUD. And there's no off switch!