Babies: You have to wash them?

I have written before that I have been unambitious with Coop's grooming.  I have also been complaining often about his wretched acne.  Then, yesterday, I started washing his face.  Cuh-razy, huh?  It's totally helping, by the way. I would show you a picture but this is the only one I took today: 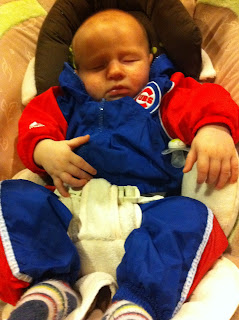 and you can't really see the improvement.   Trust me, he looks way less staph-y.

Today really got away from me.  It started nice: a new dress and a grown up meeting.  Then Ben (who drove me to the meeting and picked me up because he and Coop were on their way to a coffee date) got a hair cut, and Coop and I ducked into a delicious bakery for some decaf and a pastry.  Then Ben and I did some holiday shopping (we have been squeezing our shopping in while the big kids are at school).  I forgot half the crap I needed at Target, so Harry and I went back there after he got home from school.  We did laundry, made some dinner, refereed some fights, worked from home, cleaned everything up, put our kids to bed.  The usual.  I said it started nice, which seemed to imply that something happened to make it not nice, but that's not true-- a good day all around, but a quick one.  How is it almost December?

Speaking of December-- we are buying Cooper some Christmas presents, mainly so Harry and Jack will think Santa came for him.  But Hanukkah?  I don't totally want to buy him 8 more days of stuff he doesn't need.  Is it terrible if he gets things like pajamas and Robeez?  Will the big kids understand?
Posted by Sarah at 8:20 PM

Totally. Wes got sunscreen and Cheerios from the Easter Bunny his first year! Even now I think James's stocking will include pacis, baby shampoo, and socks. He really needs socks.

That picture is hilarious!!

Oh, it is totally ok to do that! Julia got a car seat from Santa on her first Christmas. She was 6 months old and getting too big for her infant car seat and she didn't "need" a toy, so she got a car seat. :)

I should add that Elisabeth thought Santa was a genius for knowing that Julia was too big for her old car seat. :)

Yeah, pajamas and Robeez are totally okay. My kids are both getting socks and pajamas. And maybe bubble bath.