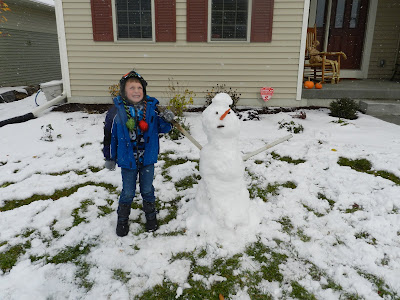 Today, we went to parent-teacher conferences at Harry's school-- they were adorable. Harry's teacher says it takes him a long time to put his coat and boots on at the end of the day. No shit. She should see him get dressed in the morning. Yesterday? 20 minutes to put on a shirt. One shirt. He sees something shiny and then poof! Concentration gone. She also said he is great at math. He loves story problems because he gets into the story aspect. Like if 5 kids are playing and 2 leave, it's not about the 3 who remain. It's about WHY did they leave? WHERE did they go? Cracked us both up. After the conference, he wanted to show Ben the library, and we got meet the 2 librarians who let him check out a book even though there's no school today-- he even got to operate the scanner by himself. A very big deal. We wandered around the hallways for a bit with a sleeping Cooper, trying to find the door that was the dead closest to our house, and as we passed a group of lockers Ben said, "Oh! Emmerson! That's one of my favorite names. Doesn't it sound great with Dennis?" I almost punched him. I also love that name. So why didn't we consider it for our little baby number 3?

Cooper was almost Wallace, Sebastian, Darwin, Bradley, Woodrow, Griffin, or Wyatt. I mean, he was really almost Wyatt. We loved that name and then one day? We just didn't. So we took the letters off the wall and Ben suggested Cooper, my most favorite baby name in the whole world, the name that everyone vetoed right after our big 20-week ultrasound. It was the middle name that clinched it. If we were naming him Wyatt, I wanted to use Bradley, after our alma mater, the place where we met as high school speech campers and spent 4.5 years in undergrad. Ben, though, wanted the middle name Dennis after his dad. I thought Wyatt Bradley sounded better. Ben said if we could use Dennis, he'd go for Cooper. The rest is history. And I do like the middle name-- Harry is Harrison Benjamin after, uh, Ben. Jack is Jack Leonard after Ben's paternal grandfather, and Cooper Dennis is for Ben's dad. Symmetry. I think we also went with Cooper because it's my favorite, and Ben feels bad that we won't have a little girl. (It's probably better that we don't-- you know she'd be wearing a bow the size of her head right now).
Posted by Sarah at 1:42 PM

Obviously, I LOVE the name Emerson or I wouldn't have named my daughter that - and as much as it is a unisex name, it totally would have been weird to see Cooper as "Emmerson" - although, I can say that now because he's just obviously Cooper to me. It's fitting. It's perfect :)

obviously I love the name Jack, but one of my favorite boy names is Harry. unfortunately, you just can't name a kid Harry Johnson. unless you WANT your baby to get beat up

Those are all good names, but I think you chose a good one!

Sarah! Hah! We were SO close to naming Chance, Bradley. We both really wanted it but weren't 100%. How funny huh?! Go Braves! Whom I kidding, I saw one basketball game. Go BUST!

Ack! The name issue. I'm still not convinced that Syd was destined to be a Sydney (though of course, that's who she is now, blah blah blah). I really wanted Harper after Harper Lee but it got shot down quickly. Then we decided on Teagan Grace, but she was born and the name Sydney popped in my head. So it stuck. But even a year later I wonder what her name should have been.
FWIW: He totally looks like a Cooper to me, and Cooper goes great with Harry and Jack. Emmerson, while awesome, is a little more modern and gender neutral. And the giant bows are awesome, but they end up pulling it down over their heads and then it just looks like a weird ren fair costume.

I almost switched Emily to Emerson at the 11th hour, since both worked with Emmie and we had decided on that, but looking at her now, she's such an Emily I can't imagine it any other way!

I'm quite partial to the name Cooper, and I think your Cooper wears it very well. Also I loved story problems for the same reason Harry does. Too cute.

Yeah, to use all the baby names I loved, I'd have had to give birth to a Duggar's-worth of kids.

I'm still annoyed that Husband vetoed Atticus, although Ethan is far too playful of a kid to have pulled off that name, so I guess it's okay.

I was wondering what "W" name you had up your sleeve way back when. I thought Owen, but I like Wyatt, too. But I like Cooper best of all. :-)