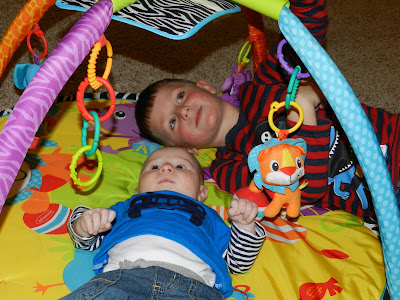 The director of Jack's preschool stopped us to coo at Cooperthis morning on our hurried way inside. I was a little annoyed because we were late, late, late, late. So late that I had just honked rudely at a woman with all the time in the world who was idling in front of me waiting for a close parking spot and then swerved around her, honked at another car who was pulling out (from a handicapped spot-- people park at will in the handicapped spots every morning which is supremely shitty) and whipped around the crowded circle drive to park on the street. So late that I didn't even have time to be embarrassed about my sad, stained Old Navy capri yoga pants and bulky sweatshirt emblazoned with Harry's elementary school logo. I did, though, have time to pause with regret for just wearing my nursing tank underneath because Cooper cried the last 5 minutes of our drive, and I leaked like a milk fountain. SO PRETTY.

Anyway, she cooed at Cooper, who smiled like he always does when people pay attention to him (NOT VERY OFTEN AROUND HERE), and Harry beamed. "Such a proud big brother," she said. And you know? He really is.

My favorite big brother thing he does is narrate his activities to Cooper. We took a page from the Kevin Henkes book Julius Baby of the World and told him that he needed to talk to Cooper a lot so Cooper could be as smart as Harry. He takes this task very seriously and constantly tells Cooper the names of things. He'll say "This is an apple," brandishing a honeycrisp dangerously close to Cooper's little face. "We humans eat them," he'll explain. That's the part that part that slays me. He doesn't think Cooper is a human! Ha! He always wants to carry him and kiss him and just generally spread germs over him. 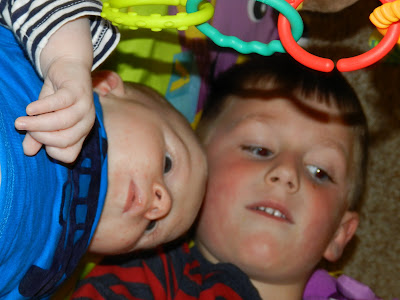 Babies are a special kind of alien! I agree with Harry. They aren't humans really until they can, at the very least, hold up their necks. Slacker babies. :)

What a nice kiddo!

Haha!!! "We humans" That's awesome. What a great big brother!