Harry and Jack playing with their night 1 super heroes-- a big hit, by the way 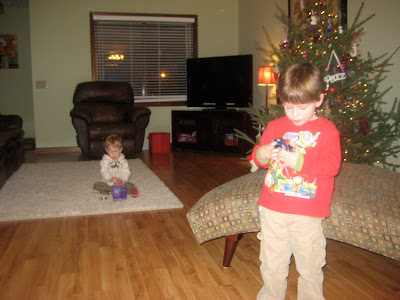 On Saturday, Harry was in full-on elf mode and whipped together this little play land for his super guys while I was in the shower. He had an excess of energy because my parents were on their way for a little Hanukkah visit. 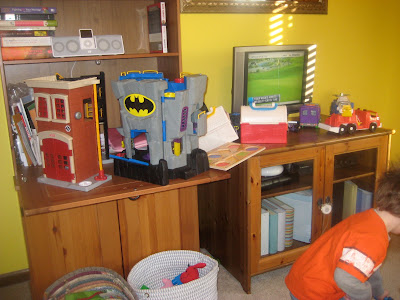 He really wanted to wear these stockings as socks 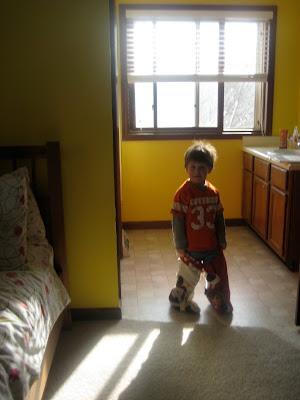 My parents brought a few presents, and there was much unwrapping 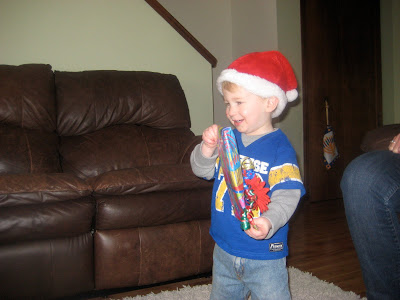 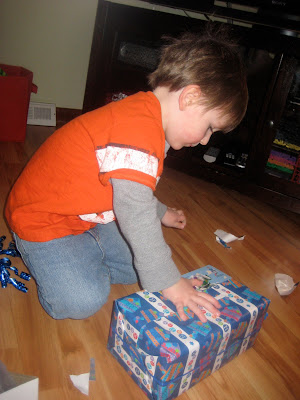 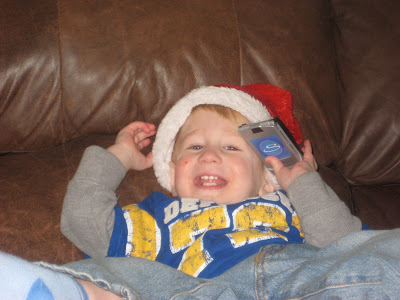 Harry got this Playmobil vet clinic, and it is intense-- the vet tech had a lead apron to wear while x-raying animals. There are file folders for the teeny file cabinet and twee bottles of medicine for the little animals. Very detailed-- if you have a little kid into imagination play, I highly recommend it (but if that little kid has a small sibling, you may have to keep an eye on the itty bitty parts.). 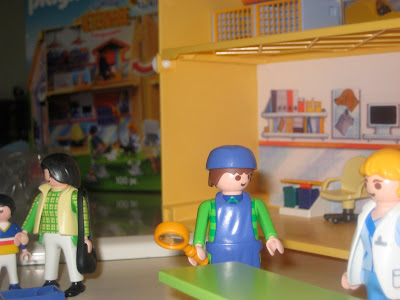 At dinner, Harry had fun with my parents 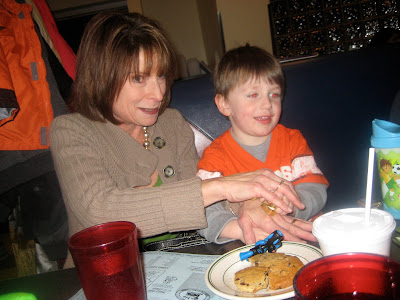 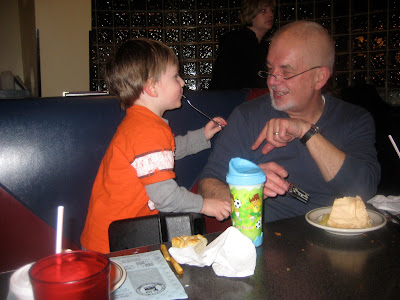 and Jack was a nightmare. Every time we tried to put him in his chair he screamed. He screamed even when we didn't try that. He also bit a creamer and made it explode all over me and was only happy standing on the booth between me and Ben eating his food while waving and giggling and saying "hhhhhhhh" (hi" to the booth behind us. 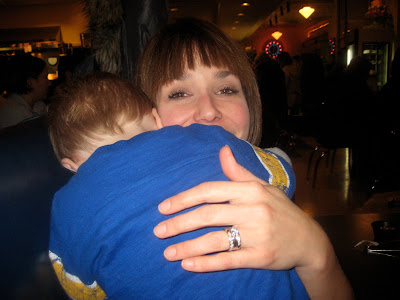 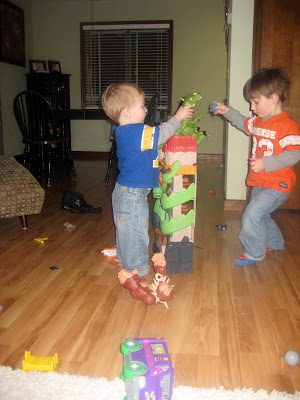 At breakfast today, Jack was way better behaved, mainly because I let him pick his own food at the buffet and gave him exactly what he picked out-- a waffle, a donut, and some Fruit Loops. Healthy. 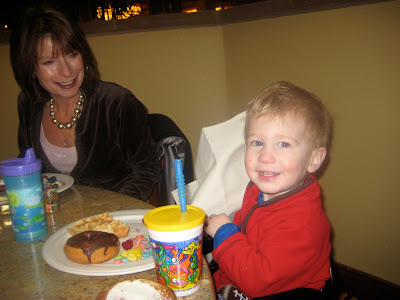 These next two are just some hilariously bad pictures 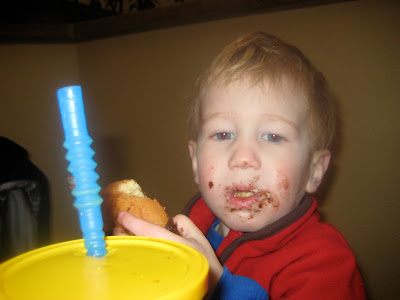 After breakfast , we played a rousing game of Guess Who I am? which is super fun, as Jack and my mom can attest 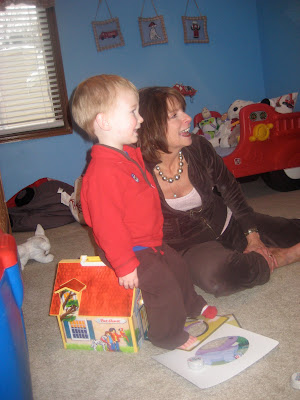 You put these little cut out things around your face and the other players guess who you are-- Harry always runs to a mirror to check before he guesses. 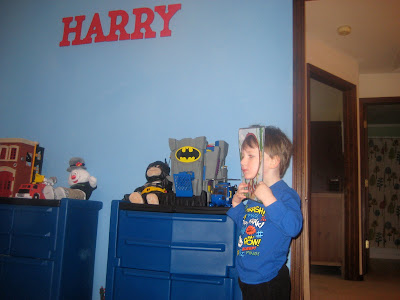 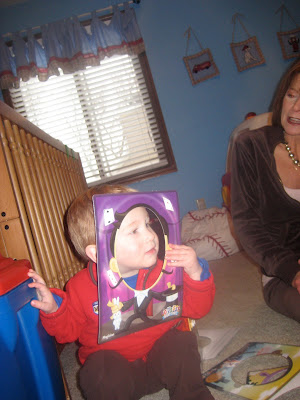 and so do the and ups. 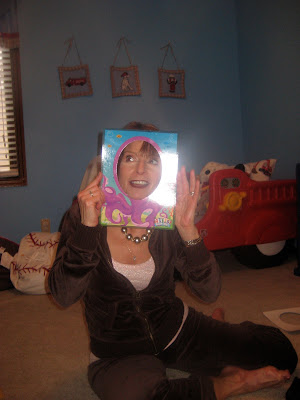 After my parents went home, Ben and I braved the mall crowds ($5 rugby sweaters at Children's Place and 25% off the WHOLE STORE at Gymbo) and bought ourselves a Hanukkah present: a new point and shoot camera!
Here's a picture of my new ELPH taken with my old ELPH, 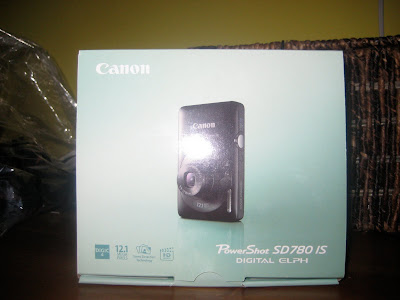 and here are its inaugural pictures:
Jack's silly face 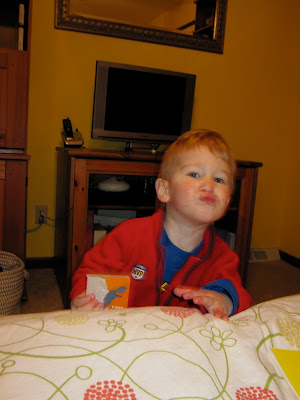 Harry jumping on the bed 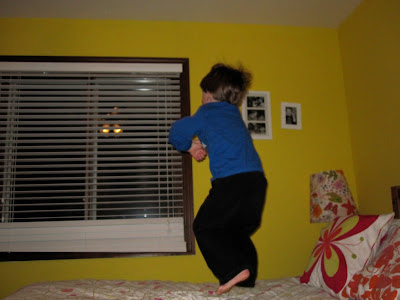 Scintillating stuff, no? Well get excited because I have 5 more mega pixels and even more zoom to capture these fascinating moments. Up next: trying to wrap up the semester on winter-break amounts of childcare and living to blog about it.
Posted by Sarah at 7:45 PM

those pictures and comments really made myevening complete...the boys, and also you, Ben and Mom and Dad all look wonderful...thanks yhou for sharing...Bomma

We had a similar experience at a buffet last weekend... once we gave in to whatever they wanted the kids were much happier...
Happy Hanukkah :)

Fun! I think I need a donut and a waffle now. That looked delicious.

I'm starting to wonder how the eff I'm going to get even the minimal amount of prepwork required for my two labs done on no childcare. I get to pick out the grading scheme... wacky! Am not used to being an adult yet.

love your new camera! and that donut looks damn good.

We are all about the booth when we go out to eat with AJU5 - it is so much easier than trying to get her to stay in the high chair!

ANd I am there with you on getting the end of the semester stuff done. Hopefully this week will go smoothly :)

Happy Hanukkah! It looks like it was a great time for all. I adore that face game--it looks like a blast. Back in high school I tried to convince my boyfriend that I was Jewish in hopes of getting 8 gifts. Shameful!