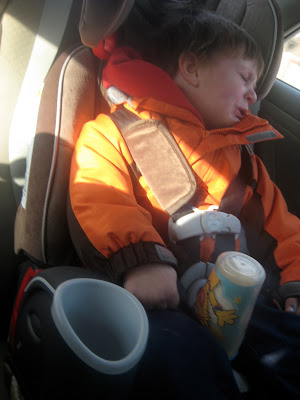 I feel terrible for my post yesterday when I was all "3 year olds suck." My 3 year-old sucked because he had pinkeye and a double ear infection. Oops.

Both kids woke up with freaking SNOT in their eyes. SNOT. So before hacking down our tree, we took them to urgent care to make sure they didn't have pinkeye (which, they do). On the way to the doctor, Harry lost his shit and started screaming that his ear hurt. He insisted that it hurt really bad on the inside and that it was not okay. He was really emphatic about the not okay part. He cried for 45 minutes-- in the car, in the waiting room, in the exam room, and durning and after his diagnosis of a double ear infection. Ben finally shoved some Tylenol down his throat and took him out to the waiting room to look at the fish, so I could listen to the on-call pediatrician give helpful eye drop appllication tips and so Jack's eye snot could get a look. Pinkeye. Oh yeah. 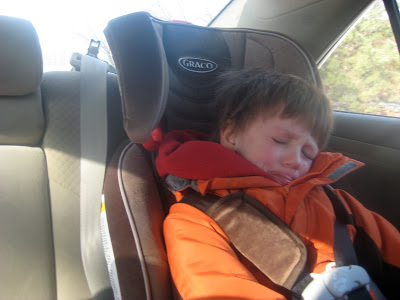 Ben stayed inside and waited for the Augmentin and eye drops, and the kids and I went to the car to listen to Christmas carols. Harry's Tylenol kicked in (thank god), and he passed out instantly 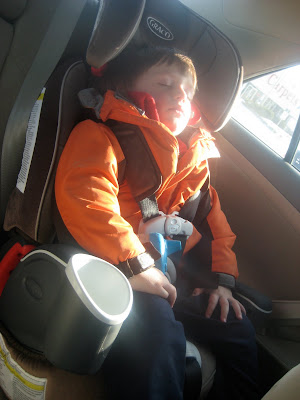 He was not, though, in a totally awesome mood when he woke up at the tree farm, where we opted for a precut so we could get our little sickies home 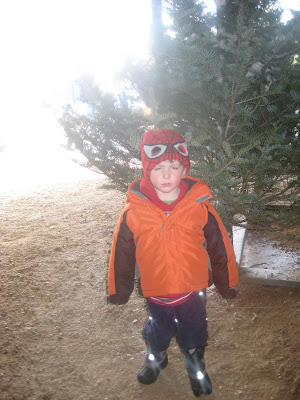 Ben's just excited that he doesn't have to wield a saw 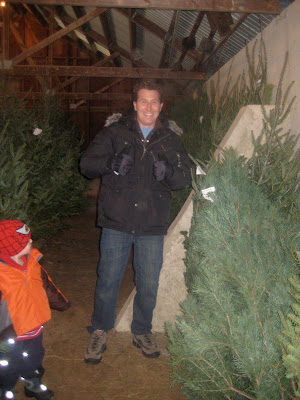 Harry fell in love with his tree and would not be dissuaded. 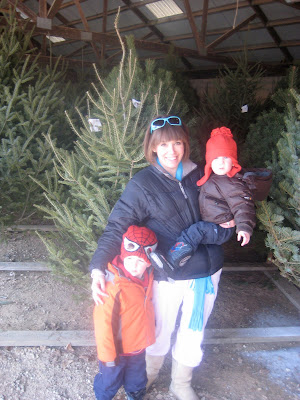 A leetle whining at the donut and cider stand 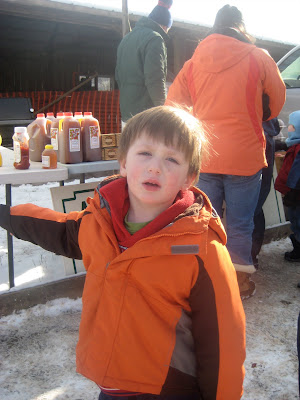 A tree! On my car! So awesome! 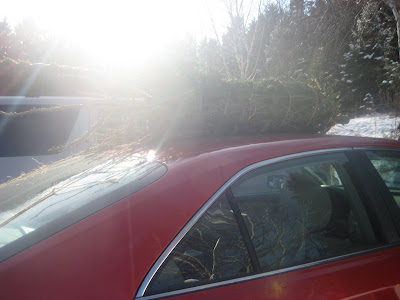 Harry was so proud of the stubby little tree he selected 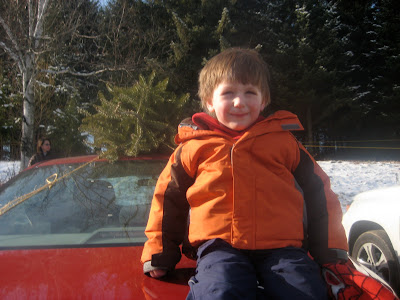 At home, we stashed Jack in his crib for a nap and got to work on making some Christmas magic, Ben unroped the tree (yes we have matching cars. I know. Super dorky) 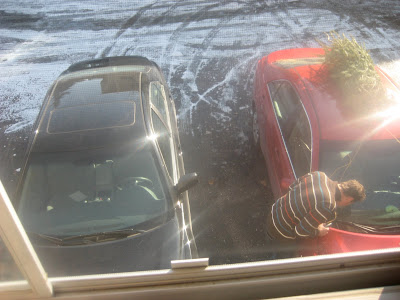 and carried it around to the front door 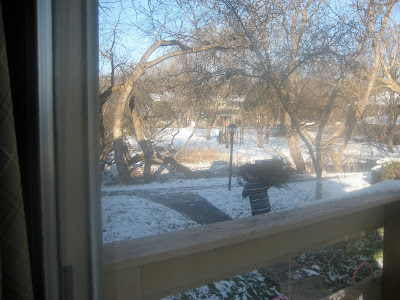 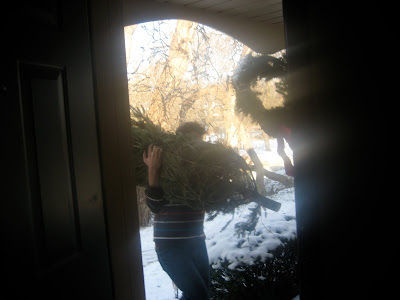 Ben was like WTF? Why are you taking pictures and not helping me? 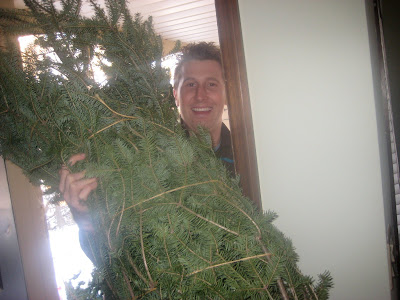 Ben took off his shoes as he brought the tree in, and I took a picture so I would remember to tell you-- Harry asked Ben the other night before bed if Santa had to take his boots off after he came down the chimney. Maybe I should relax my stance on shoes in the house? 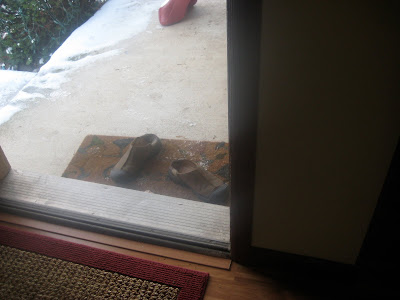 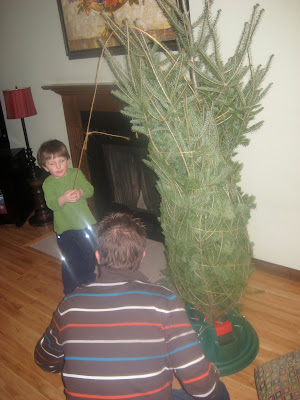 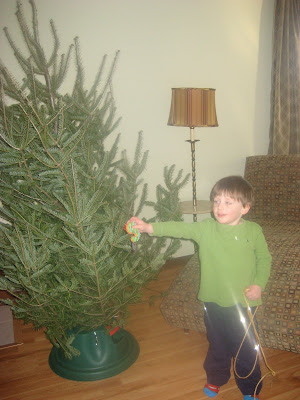 The lights were so much easier to put on a real tree-- only took 3 minutes, which was a treat because back in the day before we bought a pre-lit tree, by the time we would string the lights, we wanted to kill each other. 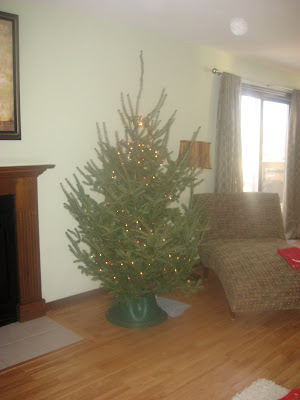 The BEST part of decorating is opening all the boxes and remembering all the ornaments. Harry loved this as much as I did, which was especially adorable because there's no way he actually remembered any of it, especially since Santa dropped by and decorated our tree last year. Also, we have 2 baby's first Christmas ornaments for Harry and none for Jack. We suck. 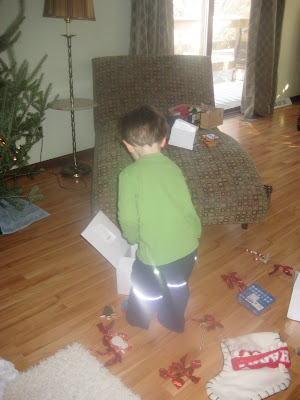 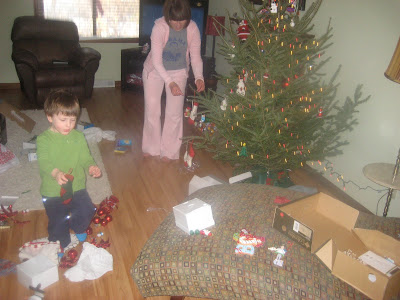 These cute little leg dangling shelf-sitting snow men were (surprisingly) the only decorating casualty. Ben tripped over the Little People nativity on his way to distribute more tchotzkes and knocked them on the floor. Tragic because they're so happy, even headless. 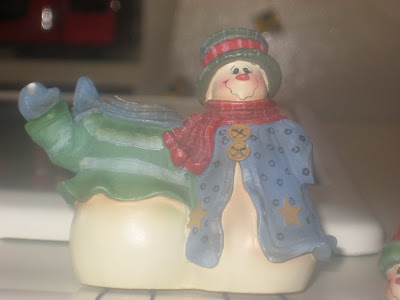 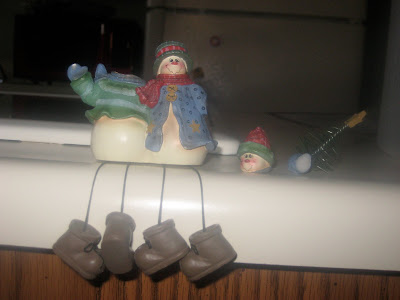 This pretty much sums up the holiday for us. 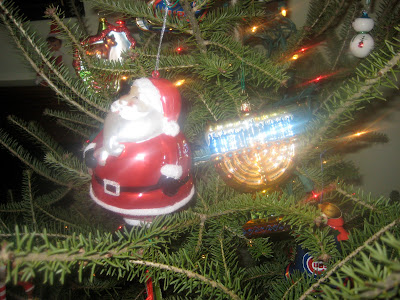 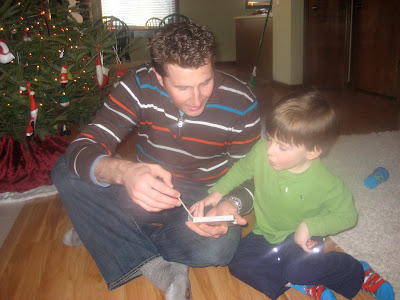 Sweeping up needles. On the other side of the room. I feel like I'll be doing this a lot for the next few weeks. 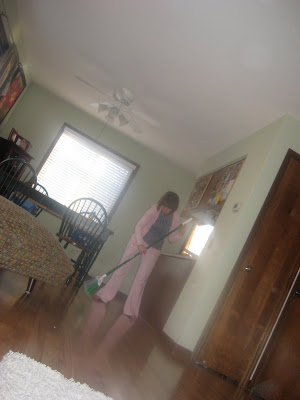 Harry calls the manger the "Hanukkah house" because that's the joint gift (along with Polar Express-- ha!) that they unwrapped in the first night of Hanukkah last year. 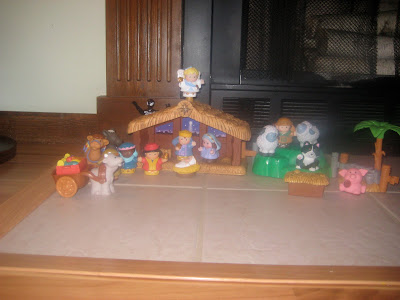 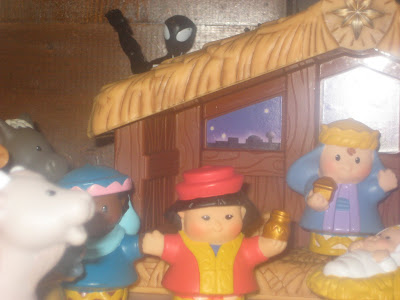 Definitely has a lean. That we are IGNORING 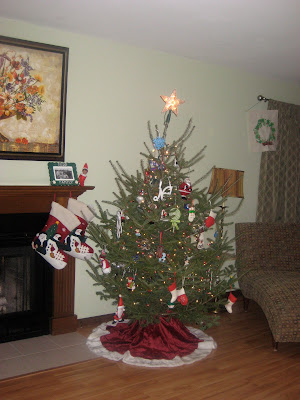 But I am utterly charmed by the stubby little thing. 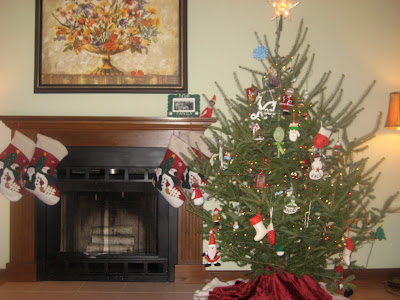 SItting next to it right now, it totally smells like gin, which is also a perk.
Posted by Sarah at 8:07 PM

I love the tree! I have the same tree stand (from Target) and ours also has a lean that we are ignoring... The needles should decrease a lot after a couple of days. My tree drank the entire reservoir each day for like 4 days and now has slowed down. So have the needles.

So sweet! We have a million needles everywhere from our artificial tree that is out on the porch! How the heck did that happen?

hilarious! can't wait to get our tree next week! We ALWAYS have a lean, too. Oh well. Where did you get that fabulous menorah ornament? love it!

Praying the boys get better soon! And as for the cars - I love the red and green as well :) Very festive!

We just have two mini artificial trees. My MIL and AJU5 put hte one with little wooden ornaments up, and AJU5 has already removed all ornaments in her reach multiple times to distribute to us. I am glad we aren't planning on a real tree for a few years! Ornaments are enough to clean up...

I'm impressed you got all that done with two sick kiddos! We managed to get the tree, but I have a feeling it will sit on the porch for a few more days. Baby steps.

So Gabe has a silver Ford F150 and I have a Silver Ford Escape. Gabe thinks we are totally dorky, so glad there are others out there! :)

Love the tree. We usually go cut one ouselves, but may just be buying a pre-cut at some wonderful place like Home Depot (cheaper than a nursery) since we have waited so long.