Jack actually does have a fever, and he may be joining Harry in ear infection land. He had a fever yesterday, so we made him a quick appointment at urgent care to get his ears checked because he has been dripping mucus from all facial orifices for at east 5 days, and you never know. On our way into the clinic, we bumped into our pediatrician's nurse, who had her arms full of boxes of pediatric H1N1 vaccine. Score! She commiserated with Jack and dashed behind the front counter to switch his appointment from urgent care to our regular doctor. So nice! Jack couldn't have his H1N1 booster because he had a fever, and the pediatrician examined his ears for quite some time before asking us to bring him back Friday for a re-check (and more H1N1 vaccine). He couldn't tell if Jack's left ear was red because Jack was screaming or red because it is just starting to get infected. He even took care of making our follow-up appointment himself, since the front desk had his schedule blocked off for Friday. Again, so nice!

But still. Not so nice that Jack is sick on our snow day. Between him not feeling well and Ben rushing to put together a snow day special for his company, I almost feel guilty lounging about. Almost.

A shameful picture on so many levels. The are in their jammies at noon. Most of their dishes are Munchkin Take and Toss that were never tossed. The rest are paper. No place mats. Lots of microwaved food. Ugh. Paper napkins. The horror. 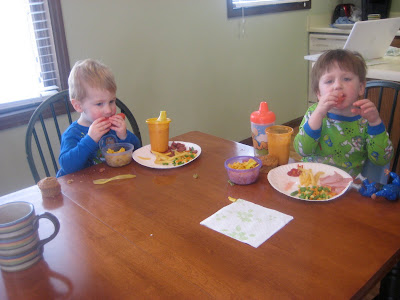 Picture-worthy because the kid never eats fresh fruit. But today, he sucked up some watermelon spears and asked for mo. 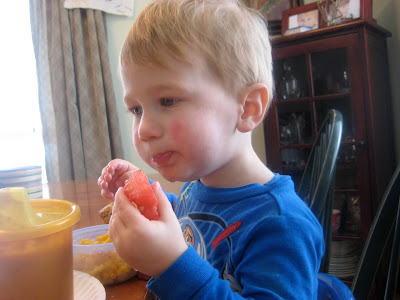 Soon, we shall stop kicking our toys and get dressed 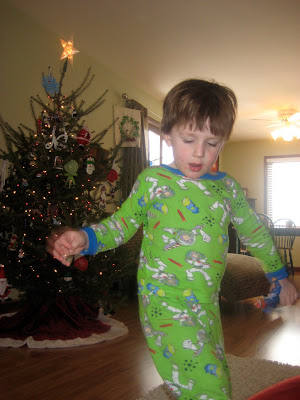 my kids ONLY drink out of the take and Toss cups. They break/refuse to use everything else. I give them the Take and Toss so I don't care if they chew and mangle the straws or whatever. I run them through the dishwasher like everything else and if something gets melted (only happened once), I can toss it without feeling like I'm throwing away money. So don't be so hard on yourself - these pictures are like my everyday routine! Of course, my standards are low. hope everyone feels better soon

Love our Take and Toss!!

Jack looks so old in the watermelon picture! Take and toss utensils are a must