I don't know what he is doing in this picture, but I think it was LOUD 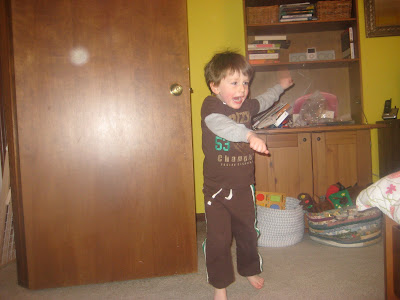 (also, do you like what a total shithole my desk is when the fold-out cabinet thingy is folded out? You should see the cupboard underneath-- about $5000 worth of archival Planned Parenthood documents and every picture I have printed in the last 12 months and 7500 paperclips all jumbled up together with some cords and power strips)
It snowed yesteday and everyone in town forgot how to drive and it took me over an hour to get home from work and when I did, Harry accosted me in the laundry room and demanded that we go outside and play. I said we had to eat dinner first, and he burst into snotty tears. WTF? 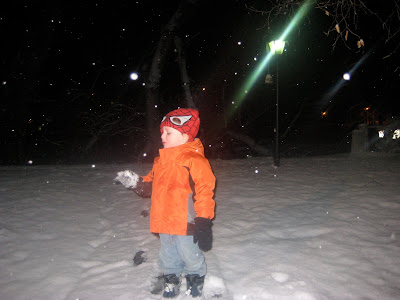 And poor Jack hated the "oooooh" (snow) because it was "daaaaaaa" (dark) outside and last year's boots didn't fit him, so he just stood there in his sneakers freezing. 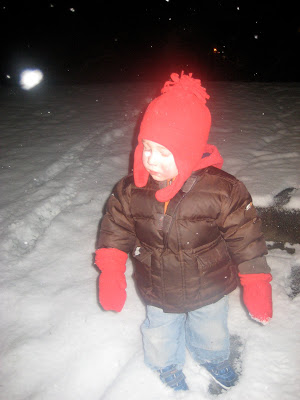 Tonight, we went to Target to get a tree stand for the tree we're hacking down tomorrow, and we grabbed some light up Spiderman boots for Jack (klassy), and Harry went batshit crazy because he wants Spiderman boots too even though he has boots at home, He started screaming "My boots are too small! I can't walk! They hurt my feet!" at the top of his lungs. Awesome.

He is asleep now after throwing the mother of all tantrums because the week's new episode of the "Fantastic Four" cartoon he is addicted to doesn't DVR itself until 9:30, which is hours past his little bedtime, but he wanted to watch it at 7 BEFORE IT EVEN AIRED. I told him there was no way to travel to the future without a Delorean. And yet. The screaming.
Posted by Sarah at 10:15 PM

And is he airborne in that first picture?

I love pictures of kids bundled up to go out in the snow. You know, where their arms kind of stick out? So cute!

I just read your title and was already nodding in agreement. Three year olds are NUTS. Best and worst of times, right?