This shirt was so patronizing that even Jack's teacher, a man who wears yoga pants and does monkey jumps and forward rolls and calls women Mom for a living, made fun of him a little 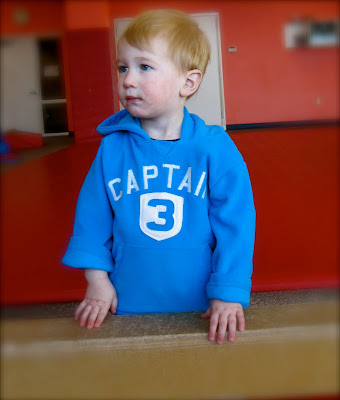 But really. How can you NOT mock captain Jack the cave man? 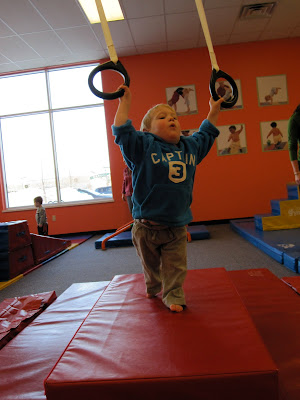 A small detail, but I so dig his splayed little toesies 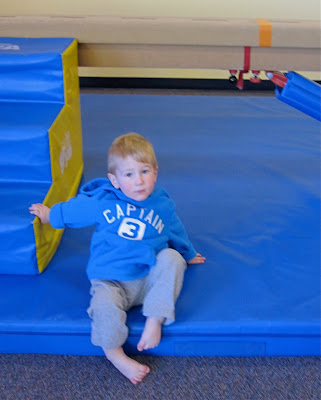 That's all I got, guys. The end of the semester is kicking my ass, as usual. But if the new semester were to start tomorrow, my seminar and one of my public speaking classes (the one with only 6 sections)would be on like a pot of neck bones. The other public speaking course-- the big one? Aaaaaaalomost ready. Now there's just, you know, the end of THIS SEMESTER. Yikes.

I created, administered, and graded my first essay exam this week, and it went well and was actually fun to read (how do you know you're a dork? you looooove reading bluebook essays about Margaret Sanger). Tomorrow the boys and I have to struggle our way to campus and run some unavoidable errands in preparation for a day of staff meetings on Sunday (yep. sunday). But after that? There is a light at the end of the tunnel. I have a meeting on the 23rd and then nothing until next year. Play Doh and really trashy fiction, here I come.

So, Jack. Still a crabby (almost) 2 year old, although it is lovely to hear him say Mama, even when he's whining. At gym, he said bubble and pop and ball and he was yelling something at a baby who was crowding him on the stairs to the balance beam. He kept yelling the same thing, and I stopped an listened, and he was saying "no turn." I asked him if that's what he was saying, and he said "yeah!" It sounded like "nah tah," but I think that's what he meant. An explosion, perhaps? 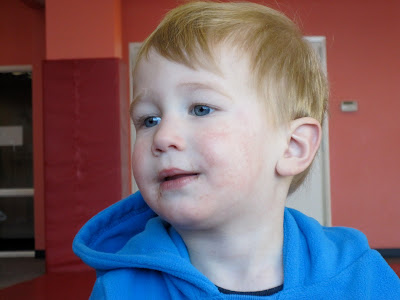 Hang in there... you're almost done!
Love the sweater :)

You know, my nephew Ethan did the same thing. He said ball as his only word forever and then it was like he exploded with words when he turned two. When Evan left for training Ethan was barely saying anything and just a couple of weeks later he was putting words together like nobody's business. He even called Kyle "Mamoo" for a while. Jack'll get his words, don't you worry. He's probably been focusing on his large motor (apparently) and his fighting skills. :)

Look at you Sarah with your fancy camera! These pictures are great!