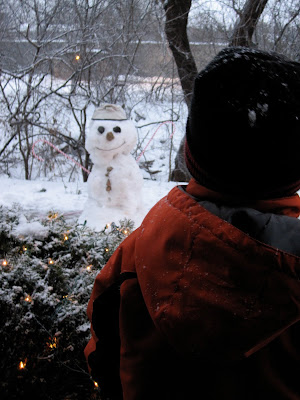 We got snowed in today and couldn't go to Ben's parents this afternoon like we usually do (we hope we can make it tomorrow), and as a result, all we did was open presents and hang out in our jammies all day long. The night before the night before Christmas (which, coincidentally, is the name of an excellent children's book), we started to hear the terrible weather reports, and we grudgingly accepted the idea of Christmas on our own and at least bought some food for Christmas dinner. And some booze.


Santa thought Ben and I would get a few more minutes in bed this morning if Harry and jack had a couple extra stockings to open upstairs. Santa was right. 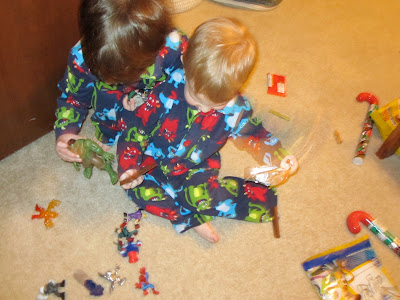 Harry immediately played with the action figures, and Jack sat down and devoured a Kit Kat bar, after only being awake for 2 or 3 minutes. That's my boy. 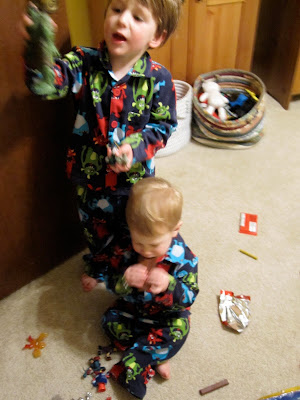 He was pretty tired, which reminded me of him last year, sleeping when Harry was ready to tear some shit up. 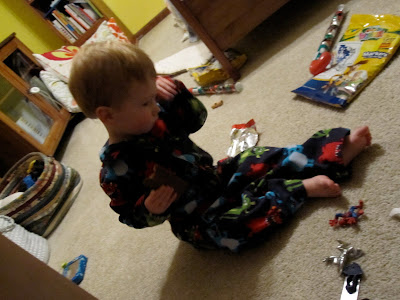 Santa made a slight tactical error by wrapping Jack's gifts in Toy Story paper. All Jack asked for for Christmas was "Zuh" or Buzz Lightyear. He got it (along with a Woody for good measure), but the rest of his stuff, while not from the Toy Story movie, was wrapped in Buzz and Woody paper, which meant he was excited about each gift until he opened it and found no Buzz inside. Also, check out my awesome hair. 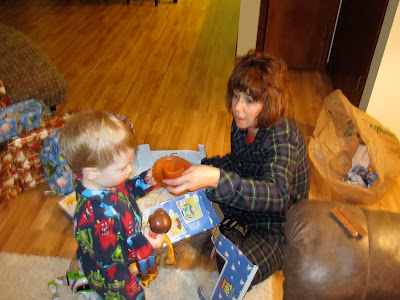 Annoyingly, this coloring book (and the damn Kit Kat) was Jack's favorite gift. 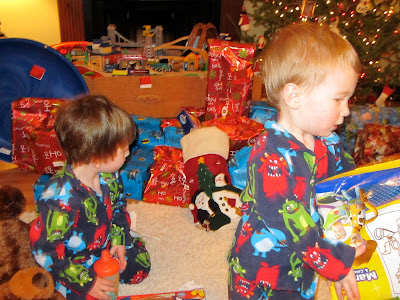 I have 67 pictures that look just about like this one. 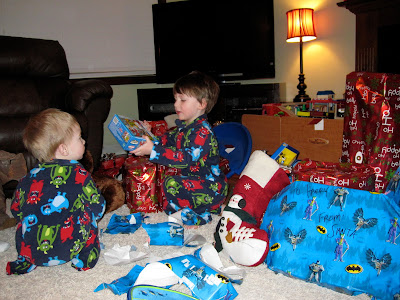 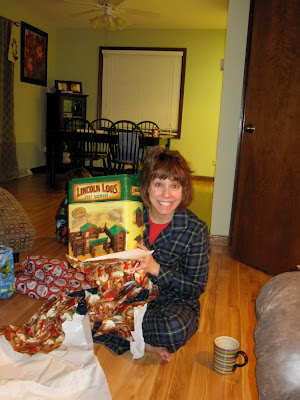 This is the 3rd year I have made monkey bread on Christmas morning and the first year it has turned out well. I ate monkey bread, pizza, and chocolate chip cookies, Frango mints, and chocolate Santas until it was time for ham and pie. I may never weigh myself again. 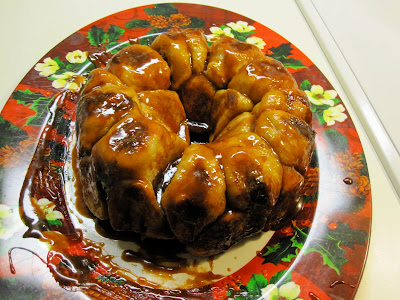 Ben is like the best gift wrap gatherer ever. He has it in his hands before it leaves the present, practically. The man put garbage bags in arm's reach of the couch last night before bed because he was PLANNING AHEAD to collect gift wrap. 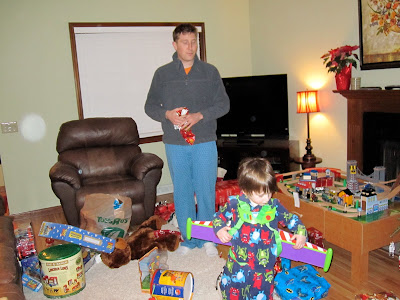 Jack was pretty jaded near the middle-to-end of the present opening, but Ben was super stoked to get this truck. 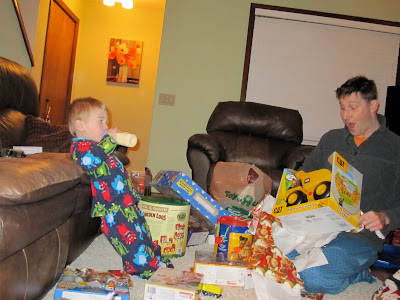 All of the sudden Harry narrowed in on the chocolate Santas Santa left on the tree, and ripped them off while Jack shrieked "nandeh" with his mouth still full of Kit Kat. Today was a healthy eating day all around. 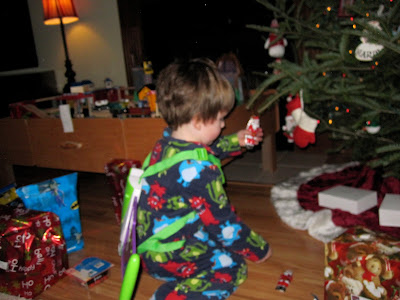 Can you see his Christmas pedicure? 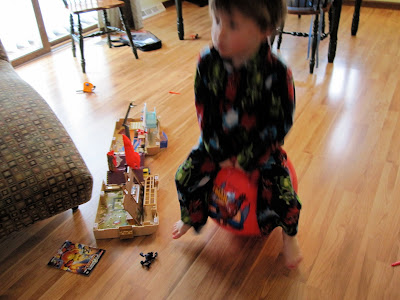 Ben's going to be so annoyed when he sees this picture. 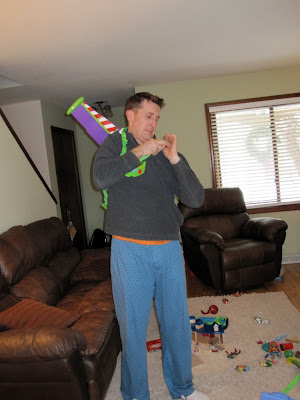 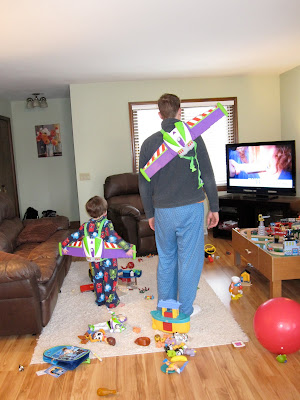 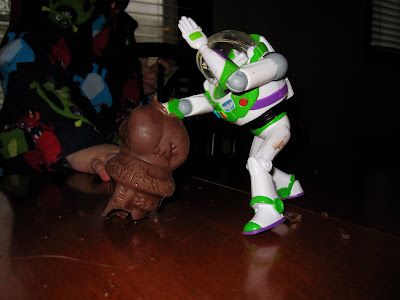 Jack has finally warmed up to playing in the snow 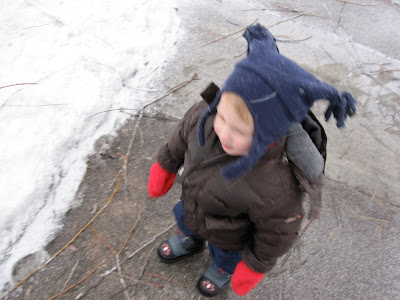 He still wants to go in before the rest of us, but now he just kicks it politely by the door instead of screaming "Mama" from a snowbank. 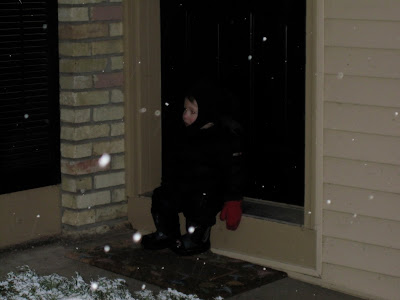 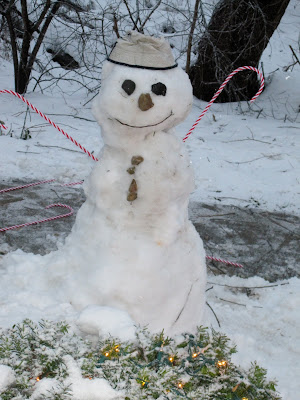 When we came back inside, Ben and Harry made Jack and me go upstairs because we were harshing their train building buzz 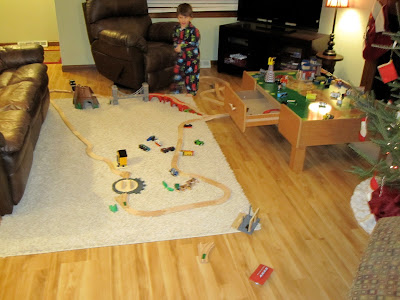 Even though we're adults. we get really proud of ourselves for doing normal adult things like making dinner. We had ham, baked sweet potatoes, green beans, and apple pie. And we were still in our Christmas Eve jammies at 6 on Christmas night. And Jack supplemented his meal with cold pizza. 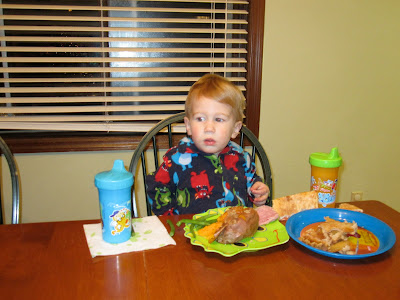 I know this is a terrible picture, but it makes me laugh, and I thought you might get a late Christmas chuckle, too. I was reaching into the cookies for another, um, handful, and I heard the whir of the camera opening and turned around to glare at Ben. So glam. 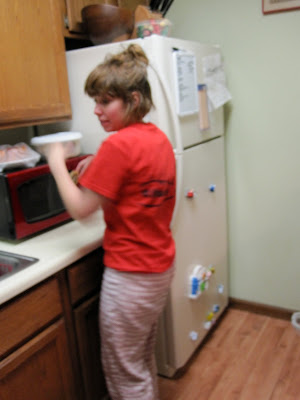 Merry Christmas! We hope your day was as jolly as ours.
Posted by Sarah at 9:07 PM

What FUN!!! We also get proud of ourselves for making real adult dinners with a protein, a veggie, and a starch. I will probably have a child leave for college thinking pumpkin bread is a side dish instead of a dessert.

My kids both have the same monster jammies your kids have! So cute!

Wes was the only one who stayed in his jammies all day because we kept having to put him down for naps. He was quite overwhelmed by all the excitement. He finally came downstairs just in time for dessert and ate a cupcake in his high chair rubbing his tired little eyes the whole time.

The wings picture is super cute!

Glad you guys had a good day :)

mmmmmm, Frango mints! I love their monster jammies - glad you had such a great day! (despite the snow- we are snowed in here too)

Love the wing picture too!

It looks like the boys hit hte mother-load of toys and had a blast with them!

I LOVE the snowman! I wish we had snow in CA, or even in Colorado! (There is some on the ground in the mountains, but they could use several feet more!)

Also, that monkey bread looks awesome! You should post the recipe -- I have been wanting to make it for Christmas breakfast but haven't done it since last year Zoe was a newborn and I was proud of myself for even wrapping gifts and this year I was just lazy pretty much.

Happy Holidays to you all!