Today, I picked Harry up from Lunch Bunch (where he ate half a clementine and about three bites of his string cheese, leaving a PB&J another clementine, and a bag of cute little iced gingerbread men completely untouched. He never eats at Lunch Bunch, but he always claims to be "stuffed." I, on the other hand, ate an entire VILLAGE of gingerbread people last night on the couch. Grumble, grumble.) and told him to hurry up and grab his back pack because we were going to go home and play in the SNOW!

He practically flew outside to the car (and then flew up the stairs to his classroom and back down again because we forgot his damn backpack).
As you can see, he had a fantastic time cavorting outside (although we did eventually have to go in because he couldn't keep his hat and mittens on): 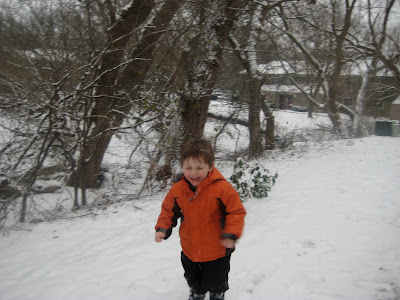 Also because Jack kept stepping out of his giant boots (also, Jack hates the snow. he just stands there shaking his head and saying oh no, which could mean "snow, no" or "oh, snow" or really oh no-- I have no clue, but he definitely does not like) 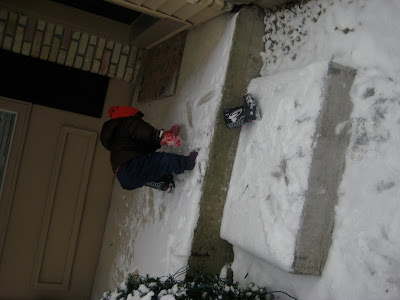 Because Harry's snow pants were a 2T and so small they were giving him a wedgie, we went to Target to get new ones and figured we'd pick up and extra pair of boots and some more hats and mittens, too, because Harry has to take all of his snow things to school everyday, but he can't leave them there. Awesome! As I struggle into the building with jack, Harry, Harry's back pack, and Harry's lunchbox, I'm always thinking man I wish I had some more bulky shit to carry. And now my wish. Granted.

Harry passed out immediately upon rolling out of the garage, which saved me 6 minutes of the Muppets Christmas album. Thankfully. 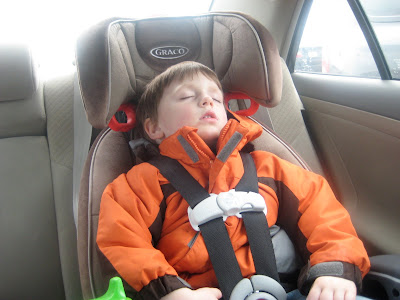 Here's what he picked out. The pants are rolled up because they are a 5T because that's the only size they had in that charming and subtle color. But that was the only pair Harry wanted. Loudly. 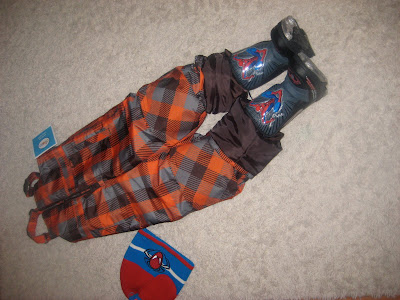 Goes nice with his puffy coat, no? 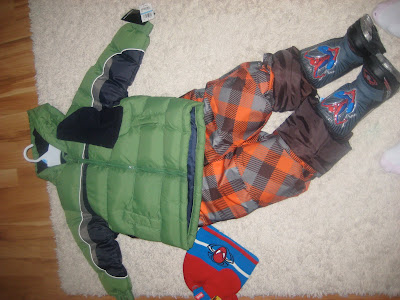 We should go skiing. I'll never lose him on the slopes.
Posted by Sarah at 7:41 PM

I love his new snow pants more than I could ever express in a blog comment. I want them in my size. Pronto.

Charlie is really into pink right now and it is tough to find him pink clothing that isn't dress-like or embossed with negative female stereotypes.

And every time I drop Charlie off at school I think of about ten thousand ways they could make it easier on me, but they never will. I do not understand.

Great outfit! I can see why he liked the pants.

Do they eat large amounts of the snow? My kids do despite my horrified protestations, NYC snow is nowhere near pristine enough for ingestion. I think the dogs piss on it while it is cascading from the sky - that's how fast it gets yellow.