Ugh, you guys. I don't think my fast is working anymore.

I have been doing the 16/8 intermittent fasting for over a year, and things were working out so well. I lost weight.  I kept it off.  I ate whatever I wanted and really didn't feel emotionally connected to food or limited by food or anything like that.

All of the sudden, I was back to weird emotional eating, overeating, and the loss of some of the best benefits of the fast, namely freedom from food angst.

Like the other day.  I ate a tbsp of peanut better on a piece of pumpernickel bread, a huge apple, and a giant bag of grapes for lunch.  Then I took the kids out for donuts and had one.  Then for dinner I had a single bean, rice, cheese, and veggie enchilada (homemade) with a single serving of tortilla chips, a tbsp of sour cream, some salsa, and some cut up red pepper.

And if I had stopped there, there would have been fine. I would have felt full and enjoyed my donut.  The end.

But instead, I had a couple glasses of wine, some Teddy grahams, another huge apple, and 2 small Almond Joys and went to bed with indigestion-- something that has been happening so much my doctor wrote me an antacid prescription.  But I think all of my night troubles? Are caused by TOO MUCH FOOD.  I wasn't even hungry  And!  Instead of stopping my food at 6 like a responsible adult, I ate until 10 pm and spent the whole next day being hungry.  WHAT THE HELL?

A host of one of my favorite podcasts had the new year's resolution to weigh herself everyday.  I have kind of gone the opposite direction on that one and haven't weighed myself at all in 2018.  Maybe that's what I need to do to help monitor my intake situation?  For me, fasting went best when I was listening to my body and not just cramming whatever into my face because my eating window was open.  So, maybe that's the key to success.  For awhile there, I was eating 5 servings of fruits and veggies as soon as my fast ended and then having another snack later.  But then! I started eating so much for lunch that I wasn't hungry again for the rest of the day and ate anyway, hence the indigestion, I think.

Bah, humbug.  Back to the drawing board.  I am committed to making this work.  I do, after all, love a midday donut. 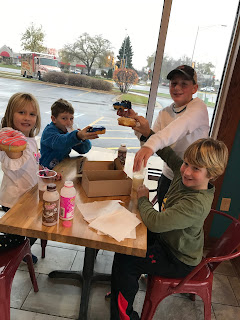 I did Weight Watchers over the summer and lost over 30 pounds, which was awesome. But then the school year started and though I haven't gained any of the weight back, my eating has DEFINITELY gotten crappy and I just don't feel as good as I did when I was eating better (less sugar, fewer carbs, more fruit/veg, more lean protein). But for me, it's just really hard to maintain that kind of healthy eating when I'm so freaking busy all the damn time. PLUS: emotional eating. I'm busy, I'm stressed, and I've been dealing with some depression this fall...all of which makes me want to stuff my face with M&Ms rather than string cheese, you know?

In short: I'm 100% with you. I'm eating when I'm not hungry, and making less healthy choices that are leading me to feel crappy...which leads me to eat my feelings...etc. etc. I'm not gaining weight, but it's still not awesome.

Yes to all of this. I was doing Weight Watchers religiously, along with IF. I wasn’t losing but i wasn’t gaining either so...Then everything went to hell with work and moving and life and I was literally eating fast food and whatever else I wanted every day for a month. Didn’t gain a single pound. So I give up. I’m just buying stretchy pants