We used to keep a huge old gray tub in the front closet with all kinds of craft supplies all jumbled up together.  The kids played with about the top third of this bin (all that was accessible), and we kept buying more of the same stuff and just dumping it in the bin because we couldn't see what the heck was going on in there.

Then!  One day!  I had a lightening bulb of an idea, and I found an old plastic 3-drawer storage unit thing in the basement and brought it upstairs for art stuff.  Now we have a drawer for pencils, a drawer for markers, a drawer for crayons, a drawer for stickers, glue, googley eyes, tape, scissors, and collage pieces, and a drawer for fancy paper (what Cooper calls computer paper, also post-its, tissue paper, and a huge stack of dot matrix paper from my office).  The huge gray tub holds coloring books, construction paper, finger paints and paper, and those really big paper rolls that won't fit in the little caddy (which the kids can totally drag into the living room or their bedrooms if they promise not to write on the walls).  And  I even had room in the closet to find all of the Play-Doh stuff in the bottom of the old art bin and put it in its own little bin for easy access. 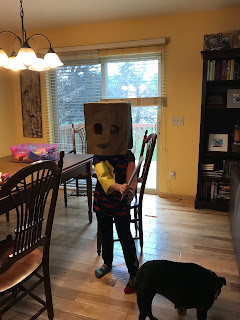 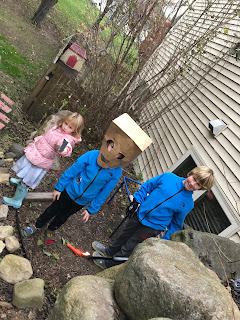 He was bag man ALL DAY. 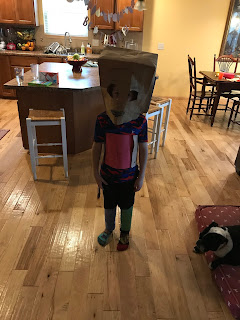 He even made body armor. 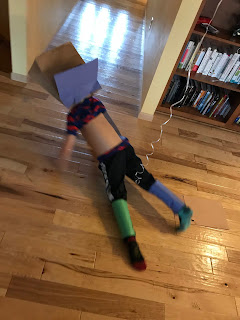 And I?  Set up shop next to all the art stuff with an afternoon snack and worked on my novel.  WHICH I HAVE WORKED ON EVERYDAY THIS MONTH. 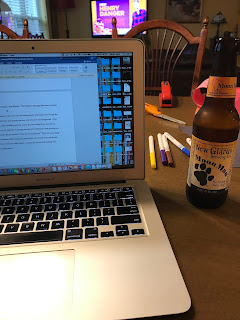 Play Doh!  Anytime she wants to play with it! 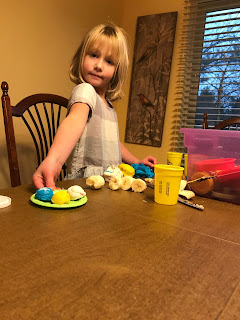 (Also!  YOU GUYS!  Make Halloween candy brownies!!) (I could only make half a pan because SOME PEOPLE like their brownies plain) 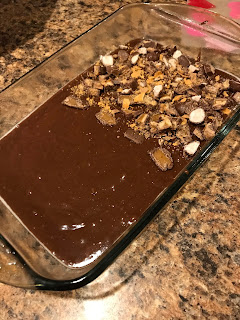 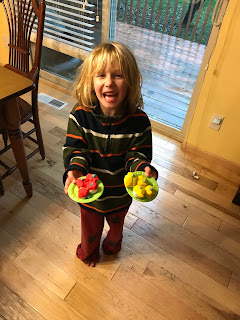 Practicing the trick letter "e" that she has since conquered.  Next up?  "s" and then "c." 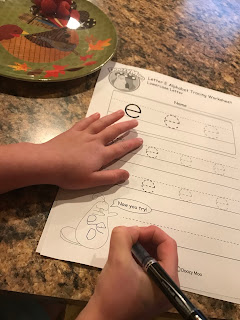 (That was the real impetus for my art bin clean out, by the way.  Dorothy needed a little fine motor practice, and I wanted to make it not a giant pain in anyone's butt, especially hers).
Posted by Sarah at 6:00 AM