Crafty Valentines for the Not Crafty Mom

Full disclosure:  I have made these before.  But!  I don't think I ever talked about HOW I made them, and it made me really rage-y.  I had to go through a 2014 Internet rabbit hole (because these babies were already passe when I made them the first time.)

Basically, I followed Rage Against the Minivan's instructions.

First, I put Dorothy in a fancy red dress and bow and let her wear my lipstick. 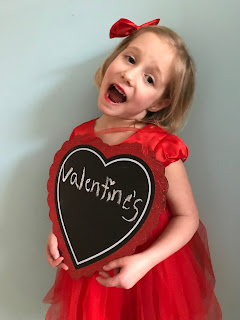 And then I just took pictures of Cooper with messy hair and a dirty face in the licensed character tee he wore to school because PATRIARCHY. 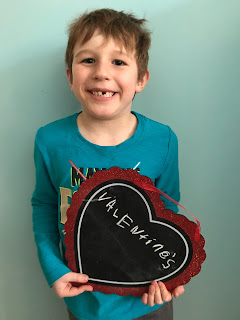 I used the one swath of blue wall in Coop's room that gets great light and looks like a photo booth background except I should have done pics like 2 hours earlier to avoid the weird shadow, but the kids get home at 3:30, and I DID THE BEST I COULD (not true, but I feel like it's the ultimate trump card.  How can you argue?  In this case, pretty easily, since I JUST TOLD YOU what I did that was not the best.  Anywho).

(I also bought a cute V-Day chalkboard at the dollar store.  That was ACTUALLY the first step.)

I used the Diptic app, which is free, but you have to pay $.99 for the fancy 4-pic grid.  The only confusing thing is that there's no strip grid with multiple rows of 4 pics so you have to use one that has a place for a pig picture and then the 4-picture grid. (There is one for 3 pics in a row, but I wanted 4).

You make a strip with your 4 pics and leave the big picture area blank and then save that pic as a photo in your camera roll.

You can see if you click on this photo that I changed the aspect ratio to 1:1, so the big picture spot got smaller, and the grid spot got bigger.  That's why the strip of pics appears to be off-center. 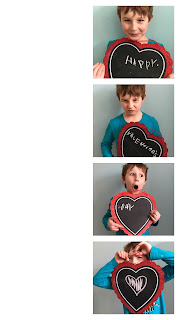 Then you switch to the grid that is three vertical stripes, and you put the pic you just saved in each stripe. 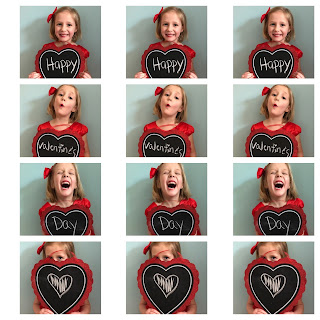 You can print these as 4X6 pictures and cut them into strips, so you get 3 Valentines for every $.33 picture (cheaper, usually because Walgreens forever has photo sales and coupons).  I think I spent $5 for both kids, including the premium grid and the chalkboard.  Maybe more expensive than the cheapest box of cards at Target, but definitely cuter.

Dorothy can't bring candy to special snowflake nursery school, so she will hand out some heart-shaped junk along with them. Coop will takeopn some suckers, and both will sign their names.  BAM.

(Harry is too cool for valentines, and jack was playing along with these until I realized that he hated his life at that moment and asked if he'd rather buy a box, and he was SO RELIEVED).

Also!  You can read my most recent Madison Mom's Blog post-- a love letter to our pediatrician who just retired-- here:https://madison.citymomsblog.com/childrens-pediatrician-upon-retirement-medical-valentine/