Today is going to be LONG.

I am up at five to work on my online class and my other adjunct class.  Before the kids get up, I have to exercise, too.  And then we all have to leave the house by like 9:45 for a presentation I am making to parents of incoming freshmen.  And then!  You'd think I would just bide my time until bedtime and crash when the kids do, right?  WRONG because I have a fancy GNO for a friend's birthday. (A highlight, to be sure).  But still-- the path from here to the finish line seems arduous. 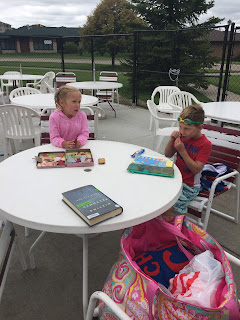 She loves these magnetic princesses so much, which I love because they were EXACTLY the kind of toy I favorited when I was little-- 4 different back drops, a magnet princess, and her tiny magnet clothes and wigs.  SO FUN! 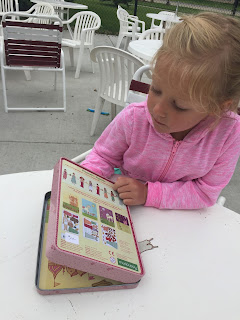 I was so cold I had to wrap up in their towels while they swam.  And I saw a friend across the pool and had to text her hello.  Ha! 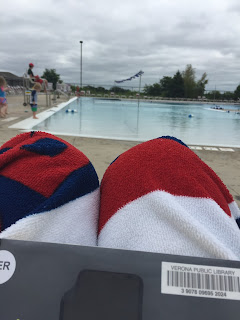 THE ZOO!  Again!  I decided to balance out of junk food and novelty $50 trip to the FREE zoo the other week with a totally free trip where we brought our own snacks (apples, grapes and carrots-- the kids were like WTH mom are you mad at us?) and just walked around and looked at the animals. So now that's $25/trip which for entertaining 4 kids is NOT BAD. 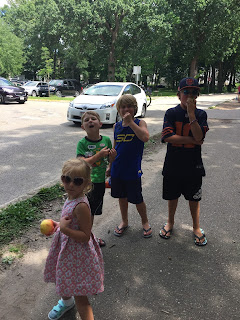 I love this sign because there are 4 cut-outs, which never happens.  And yes, I took a billion shots, and this was the best one. 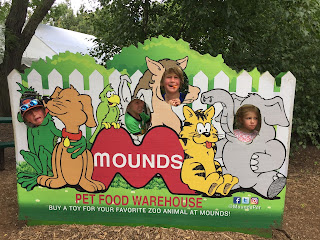 I didn't write about this last week, probably because I didn't take any pictures and I totally suck at blogging about things that are not pictured (because I am SO SIMPLE), but last week on Thursday, we had a total baseball snafu.  The little kids had t-ball.  Harry had batting practice for his last tournament, and Jack had a game in a far flung farm town.  After much juggling, we decided that Ben would take Harry and Jack to batting practice and request that Harry bat first so he could make it to Jack's game on time-- after feeding them in the car for the second time that week (such a FAIL in my book).  That left me and the kittle kids and t-ball.  And I had to be the coach.  Ben thought that there would be parents who wanted to help out, but there WERE NOT, just a few moms who wanted to stare at their phones.  SO. AWESOME.

Now I am not a total idiot.  I can hep a kid hold a bat and shout encouragements and stand in the field reminding the kids where to throw the ball for each batter (not that they are EVER going to get a forced out anyway you guys), but did I like it?  NO I DO NOT.  Especially because 4 and 5 year-olds are not excellent listeners.  I was literally hoarse after the game because I kept screaming "Good job!  Now throw it to first!  First base!  Throw it to first!  JUST THROW THE BALL TO FIRST-- Never mind,  Next batter!  Be ready for the next batter, guys!  Forced out at first or second!"

And the moms!  Were kind of judgey and pushy about where their kids played which ARE YOU KIDDING ME?  Kids don't play real sports until they're 11.  I know this because I have an 11-year-old for whom whit just this year got real.  CHILL OUT WITH YOUR PRESCHOOLERS, world.

Anyway, I have to miss the last game for my GNO, but don't worry!  The whole fam-damily is driving 30+ minutes for Jack's game on Thursday night.  And then!  We are baseball-free!!  Until next month when we start to juggle two Little League fall balls and at least one, but possibly up to THREE, flag footballs.  LIVING THE SPORT LITTLE DREAM, my friends.
Posted by Sarah at 5:40 AM

My brother dreamed of coaching his son's baseball teams until he actually did it and realized too many parents are buttholes. The only thing more miserable than sitting through a bunch of 7 year olds playing baseball on a cold day is also having to listen to one of the parents berate his child the entire freakin' game. I'm not one to hold my tongue when I witness abusive behavior but my brother told me to keep quiet because the jerk was even harder on his kid if someone defended him. My stepdad actually left the game because he wanted to punch the guy.

I absolutely love the picture of the 4 kids in the Mounds sign. Harry's facial expression is hilarious.