We have this amazingly terrible pizza chain-- Toppers Pizza-- and they have this amazing sauceless pizza-- Toppers Stix-- so greasy that the box practically dissolves by the time you get it home.  Yesterday, I stopped there on my way to Jack's baseball practice with Harry and Jack and got them a large order to eat in the car because Jack's baseball practice is about 40 minutes away in traffic.  Talk about a MOTY dinner, huh?  Well, it gets worse!  I ATE THEM TOO because being trapped in a Prius with a giant box of Stix was too much for me.  Then I texted Ben and was like OMFG I just ate so many Toppers Stix (which totally sucked because I had SO MANY SUPERFOODS yesterday and was planning to basically clean out the produce drawer for dinner.  Ben said he was going to make nachos, and I was all holier than thou and was like no way am I eating NACHOS and then I ate a million pounds of cheese and crust and grease.)  Anywho, my text made Ben need to have Toppers Stix, too, so I grabbed ANOTHER large order on my way home from baseball.  In short, baseball is fattening.

We went to the library for what should have been a lovely trip.  Jack, Dorothy, and Cooper finished their library reading logs, and it was the LAST story time session of the summer.  Our usual routine is for Jack and Harry to return the giant bag of books we haul to the library every week and Dorothy and Cooper and I go straight to story time.  But yesterday, even though we arrived riiiiiiiight on the very dot of story start time, Dorothy started putting the books away.  Jack protested, and I reminded her we needed to go to story time, and she started yelling BOTH BOTH BOTH.  I told her to be quiet like 3 times, but Jack kept protesting, so she kept yelling, and long story short, we had to leave the library.  Which made Cooper and then Jack (OMFG-- unexpected) start screaming, too.  SO FUN.  And I was the total monster who was like NO BOOKS FOR YOU, KIDS.

But the day!  It started out so well!

Harry had his LAST 7 AM BASEBALL PRACTICE OF THE SUMMER!!!  And we celebrated with donuts and coffee (me/hot chocloate (them) 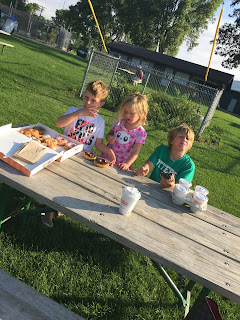 Swimming and diving went swimmingly, mainly because I remembered art supplies and snacks.  (Also, I have totally changed my expectations.  The 30 minutes when the boys are all diving is NOT for me to talk to my friends-- it is for me to keep Dorothy happy and chill with her.  This tiny change has made all the difference in my happiness) 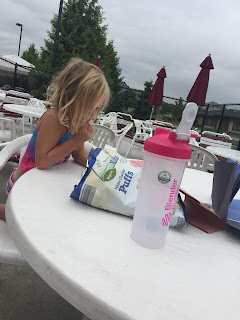 Harry and Jack worked cooperatively on Jack's big summer project from his tutor: to build a game. 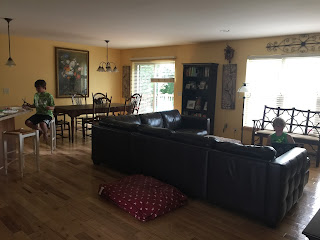 And, hilariously, the game is called Stay Away and the object is to make it from the front door of the house to your bedroom without encountering any little siblings.  And then Jack PLAYED IT WITH HIS LITTLE SIBLINGS. Ha! 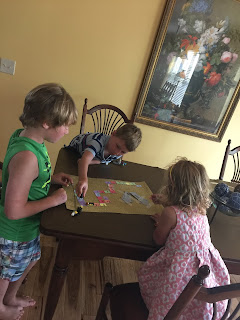 His baseball practice is 90 minutes, and I finished my 11th book of the month and relaxed. 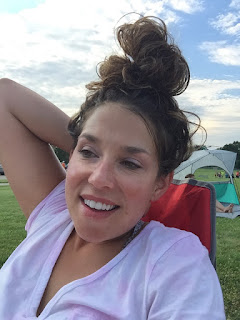 I also chatted with Harry, who brought 2 magazines, a book, and a kindle with another book he's reading and READ NONE OF THEM.  I just cannot even.  How did I birth and raise someone who doesn't actually like to read?  But he's a really fun person to hang out with because HE'S AN ACTUAL PERSON with ideas and opinions and interests-- it's really cool. 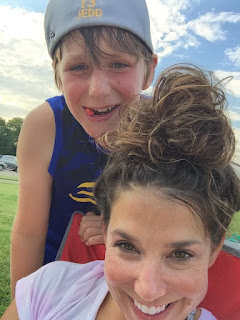 Ugh, you guys.  I have the amount and intensity of grading that can only be accomplished IN MY ACTUAL OFFICE.  So, I am off to work today and so out of practice.