I have not had a schedule snafu like the one I had this week in AGES.

I am doing a series of presentations for the parents of incoming freshman this summer, and I signed up for a couple of extra sessions to replace someone else with a schedule issue and then realized that I had to take Dorothy to the first one because every one else was camping and that I had to take ALL OF THE KIDS to the second one because Ben was working.

I could have left Harry and Jack and home, but then who would have watched the other 2 kids?!

We left the house at 9 am for an 11 am talk because I was paranoid about parking and getting where I needed to be on time.  Since I only live about 25 minutes from campus, that was kind of a dumb plan.  But!  we had loads of extra time to explore my office and building, which is where I got this random pic of Dorothy: 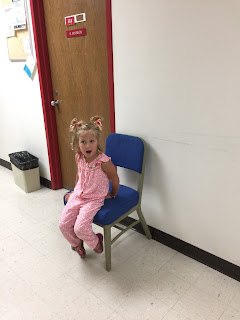 The kids looked to be pretty well occupied before I went into the auditorium for my talk, which went fine. 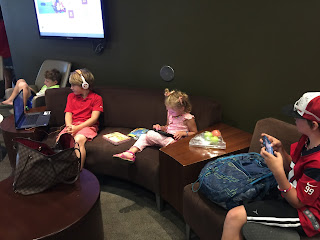 I was relieved after to find everyone in one piece and still happy, and if I had longer arms, this would have been a picture of all of us. 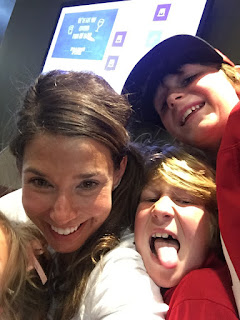 Sometimes I cannot believe that all of these wonderful, growing kids are mine, especially when I see them all fanned out in a public space. 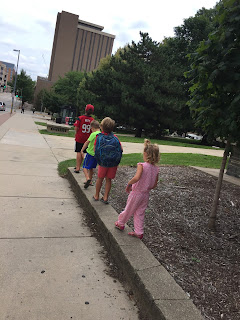 Jack is a natural college kid.  He likes everything about being on campus and he just fits right in.  I expect to see him leaning in the doorway of a frat house popping a can of beer, shirtless and scratching his stomach at 10:30 am.  HE IS GOING TO LOVE IT SO MUCH. 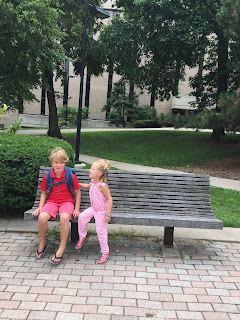 Taking them all to the cafeteria is still dicey because only Harry and Jack can hold trays.  I fully intended to go back through the line and get myself something, but lunch was $35, and that was more than I wanted to invest in cafeteria food.  Harry and Jack got burgers and fries and desserts and fountain drinks, and Harry snagged a banana.  Totally fine and normal lunches.  Cooper got a bowl of plain spaghetti, an M&M cookie, a bowl of Fruity Pebbles, and a chocolate milk, and Dorothy had Froot Loops, a grilled cheese sandwich, a mint brownie, and 2 white milks.  SO FUNNY.  (Clearly, I did my best not to influence their choices because watching them assemble a weird meal in a cafeteria is a serious joy of mine-- I need to do it more often) 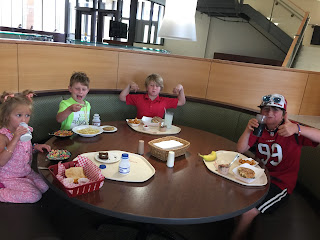 Cooper watched all of our trays all the way into the dishwashing room.  I assured him he could get a student hourly job washing dishes if he wanted to.  He seems keen on the idea.  Except by then the dishes will be washed by robots and only lords-- and I would say ladies, but the way it's going it'll just be lords-- will go to college. #plebian 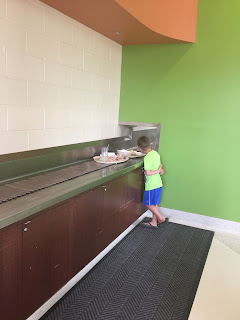 I spent the afternoon beating Harry in badminton (ha! still got it!) and getting demolished by Ben who is freakishly good at badminton-- like seriously good-- and then rounding up the little kids to go to the library and triumphantly turn in their summer reading program folders. 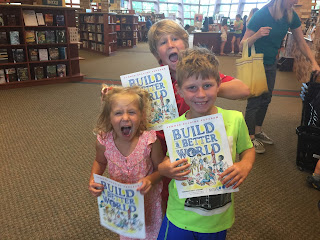 I was really, really tired last night, but I rallied for the birthday of a friend.  We started with beers on the Terrace which is basically the first thing you should do if you ever come to visit.  The we headed all the way downtown to a fancy new tapas place that got a terrible review in the paper.  The review basically said you should look out the window and not down at your plate.  This was SOLID ADVICE because the views were outstanding.

This is a shot of the view of the lake from the BATHROOM, which is the prettiest bathroom I have ever been in. 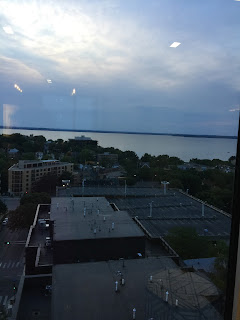 And this is a shot of the lovely bathroom itself because I am a total rube who takes pictures of purty bathrooms. 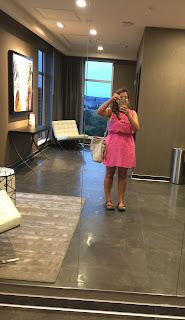 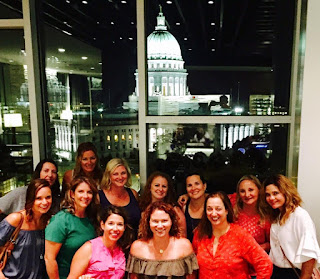