The boys returned from camping happy and dirty, and Dorothy and I were THRILLED to see them.

Ben dropped Jack and Cooper and all of the camping gear in the driveway and sped off to part unknown with Harry for a baseball tournament.  The three little kids and I went to a bouncey house place, Subway for dinner, and the pool for disinfecting and showers and also swimming, where Ben and Harry joined us after the bad news bears' thorough trouncing.

Then all the kids went to bed and Ben and I watched the last episode of Game of Thrones Season 6.  You guys!  We set a goal for ourselves-- catch up on GoT before last night-- and WE DID IT, starting with the very first episode just 2 short months ago.  If you set our mind to it, anything is possible.

I wanted to make Harry a protein smoothie before his final baseball game yesterday morning (spoiler alert: THEY WON), but it turned into a freaking mess and a half.  Luckily, Beatrix was there for me. 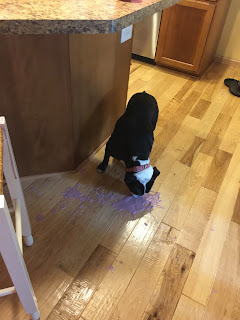 While Ben and Harry baseballed, the rest of us went to family float day at the pool. So, the pool lets us use floats every darn Sunday from 10-12, and this is the SECOND TIME we have made it.  Ooops.  Big plans for a repeat this week, though.

As you can see, we got there early and had the place to ourselves. 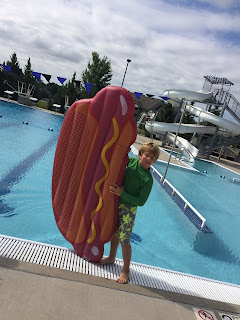 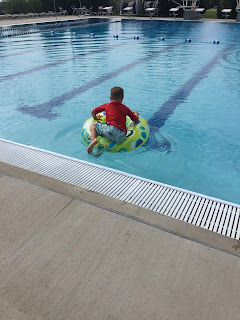 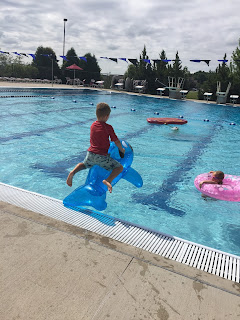 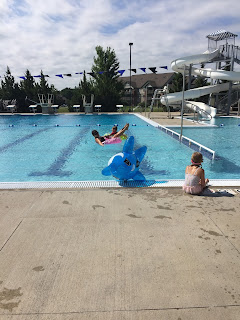 I took this pic of our spot on my way out to lunch because this is where we always sit and it just screams summer to me.  I want to frame this and put it in my office to stare at during the long, bleak winter.  Also, maybe the Please No Food signs would be a good diet inspiration? 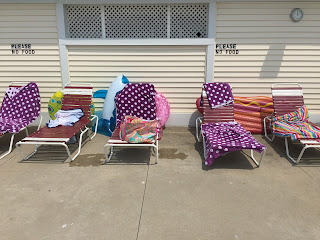 Instead of spending $50 at the concession stand (not a joke-- this is actually how much it costs for all of us to eat and the kids to have a snack), I packed 2 snacks for each kid and lunch.  Granted, it took me over an hour to make, package, and clean everything up (because some people wanted egg salad), but  think it was worth it?  If you pretend like my time is worth precisely zero dollars and zero cents, which is the assumption that we all seem to be living under. 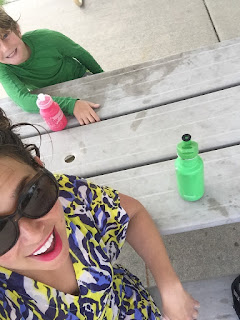 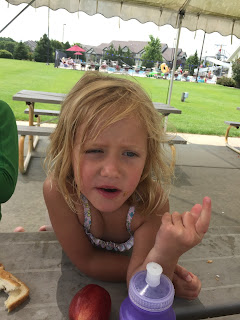 Also, lunch is DEFINITELY healthier when we pack it.

After the pool, we took the kids on a hike through a totally gorgeous park that will be lousy with sunflowers in a few weeks.  And everybody bitched and moaned and we were attacked by mosquitoes as we walked through the timothy. 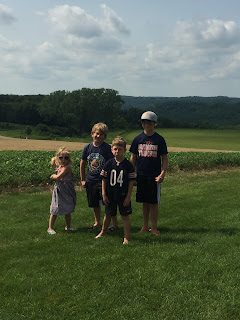 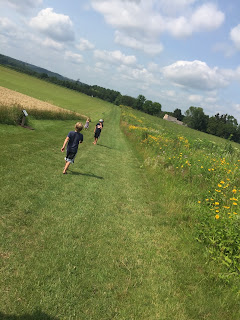 So we came home and made everyone play in their own rooms while I put the finishing touches on a lasagna, which was a REALLY GOOD CHOICE.

I love your summer gear! The hot dog float and your towels are especially awesome. And I would totally print out the picture! I started wondering what my "picture of summer" would look like, but I think mine would look like a huge pile of Popsicle wrappers and a hose duct taped to the trampoline. Not quite as evocative :)

Nothing is as good as spending time with family, you chooses perfect place to spend time with family in summer and kids also loved it as same can be seen in pictures. Thank you for sharing it

This is the best - "If you pretend like my time is worth precisely zero dollars and zero cents, which is the assumption that we all seem to be living under..."