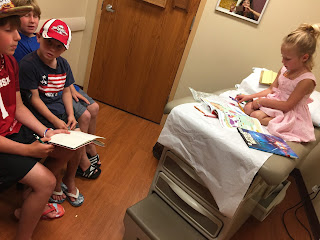 Harry was complaining in a low-level whine kind of way that he thought his ear was bruised all weekend.  Then, on Monday morning (after dive lessons of course), I realized that his complaining rang a bell from last summer when Cooper had swimmers ear.  And I loaded the whole fam damily up to go to the doc.  Which is something I hate to do because there are so many of us we don't always fit in an exam room.  I was being lazy and didn't want to drive all the way downtown to see our beloved pediatrician, so we just went to the office by our house and saw whichever PA-C had time to squeeze us in.  She diagnosed swimmers ear, gave Harry some antibiotic drops, and told us that he should feel better in a couple of days.  My dad recommended ibuprfoen and a heating pad, too, and we thought Harry would be fine.

That night in fact, he and Jack mentioned that they had never had Taco Bell when a commercial came on during the home run derby (the most boring television in the world), and I threw them in the car to make an emergency run. 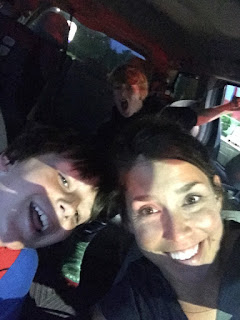 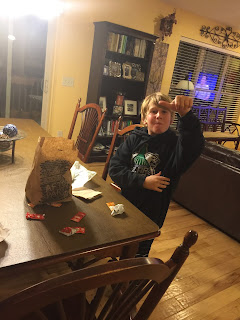 Monday night, Harry woke us up in the middle of the night and could never get comfortable, and we were up for the day at 4.  He spent all of Tuesday complaining and laying around. 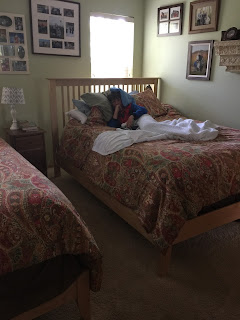 He was up all night Tuesday, too (and so were we), and on Wednesday, I called our real doc and took him in.  He took one look at Harry's ear and winced.  Then he looked at our ear drops and promised something way better.  Which turned out to be the same damn bottle we have in our medicine cabinet from Cooper's bout last summer.  Pro tip:  Ask for ear drops with hydrocortisone in them so that the infection will be soothed while the abx are killing the bacteria.  Harry feels better already and we all slept last night.  Which is why I should have just dragged eveyrone across town in the first place.  Staying home with 4 kids is no joke, you guys.
Posted by Sarah at 12:08 PM