If I weren't on a diet, I would so be eating my feelings right now

Some asshole hit Ben's black Camry tonight when it was parked in the driveway just minding its own business.

Check it out: The idiot totally hit the door then kept going and hit the back panel, too. 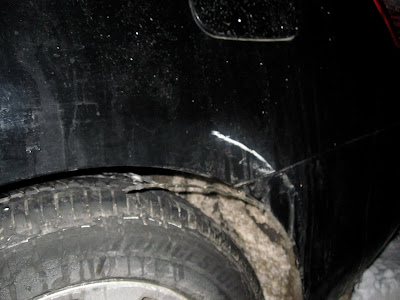 It's like the moron felt the car hit the other car but didn't realize it was a car that s/he was hitting, so s/he stepped ON THE GAS because s/he didn't understand why his/her car wasn't moving. Also, what was that crunching sound? Do you think it was the snow?

Do you know what I bet? I bet the driver bought a bunch of stuff at the Victoria's Secret semi-annual sale today. I also bet the driver had 2 small kids with him/her while s/he was shopping and didn't have time to try stuff on or even choose it very carefully, and I bet s/he was rushing back to the mall before it closed after his/her kids were in bed to return some bras s/he grabbed in the wrong size.

I have another clue: the person who hit the black Camry was driving a red Camry-- that's kind of funny, huh? 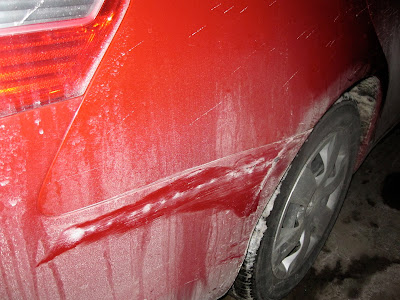 It probably is funny if you are not that person who had to file 2 insurance claims tonight and has backed every car she has ever owned into something. ALso the driver's husband didn't think it was too funny at first, but he's coming around.
Posted by Sarah at 10:31 PM

I am so sorry to be giggling at both of your expenses... but it is a tad bit on the funny side...
I hope you at least had a glass of wine last night!

People and insurance adjusters need to know that accidents do happen...I have been driving for too many years to say and still don't back up with confidence..Bomma

OMG laughing! I am sorry, but "Why the hell isn't my car moving? Oh shit!" is cracking me up. Of course, I drove right over a concrete curb last night (with Ryan in the car) and said "What the hell?" as I gunned the engine because the car wasn't moving. So, yeah. I was lucky it wasn't another car!

I assuage my own guilt thusly: I believe I would less likely laugh shamelessly at your pain, if your writing weren't so freaking brilliant. My condolences to your cars.

Misty's right. You need to be a comedy writer. Chris and I discussed it tonight and we've decided this is a grand idea! Now go and be rich. (Don't forget us little folks though).

I could totally see myself doing the same thing. Luckily are cars park through different doors, so that would be hard these days...

Hope the insurance isn't too big of a pain!

You are so funy! You have to see the humor in crappy stuff, or you would just cry.....

Oh doctor... so sorry about that. If it makes you feel better, I knocked the passenger-side mirror off my car while I was parking in our driveway. That was three months ago. Wanna know what I did instead of, you know, fixing it? I drove around without a mirror for 2.5 months and then taped it back on with packing tape. Oh yes, I did. G-H-E-T-T-O.

I adore this post. Hilarity at its finest. Sorry about your soon to be adjusted insurance rate--might want to return those bras instead of exchanging them :)