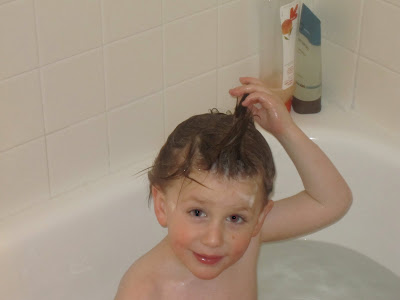 Harry pooped his pants while I was flat on my back in the hygienist's chair getting my teeth cleaned this morning.

Seriously, one second he was playing with the back pack full of super heroes he brought along to occupy himself when it wasn't his turn, and the next second, he was tugging on my Ugg.

"Mama?" he said a bit plaintively.

"Huh?" I grunted, my mouth full of the hygienist's gloved hands and her stabby instruments.

"Actually," he replied, "I pooped my pants."

But this? Was not the worst thing that happened to me at the dentist.

I have been dreading this appointment, scheduled way back in June when I was fresh off a couple of X-rays that showed some watch spots on the bottom. On the bottom? I thought to myself. All my problems have always been on the top! Who cares about the bottom? Sugar bath here I come!

Then I joined Sparkpeople, and to lose the 15 pounds I lost, I chewed a TON of Nerds gumballs. We're talking like 25 balls a day from June until September when we switched to an all-cash budget and I realized I was literally spending $5 a day on freaking gumballs. The last couple of months, I have been experiencing EXTREME sensitivity between my top wisdom teeth (yes, I still have my wisdom teeth. that's why I am so f*cking smart. duh) when I floss. I was sooooo convinced that all my top teeth were rotten and that my hygienist was going to jab my soft spots and cackle with delight when I jumped that I almost cancelled my appointment today.

Instead, she was exceedingly gentle and told me I have gum recession (caused by the 3 month sugar bath of gumballs I enjoyed) and that my roots are exposed near my gum line. I was overjoyed by this diagnosis and happily purchased the prescription toothpaste I was offered. The dentist was a little more of a debbie downer. He studied my 6 month-old X-rays with such a quiet scowl that I offered to pay out-of-pocket for more if he wanted to take new ones today. He assured me that if I have decay between my top back teeth, its not serious or I would have more issues, and he promised that my insurance-approved X-rays in July will catch any problems I might have. He's a careful, gentle dentist-- a guy so good at gum massage that even the Novocaine shot is painless, so I was mollified.

The he delivered the blow: NO MORE GUMBALLS, which, my friends, was the worst thing that happened to me today, especially because I am back on Sparkpeople to lose the 3 pounds of holiday around my hips, and I can't eat anything, and I was hoping gum would stave off the starvation.

Harry (whose teeth were again totally perfect and who loved wearing sunglasses and using the spit sucker thingy) is at school wearing the tiny, off-season clothes I keep in his back pack, telling everyone that his mom can't chew gum anymore because she'll get a cavity.

If I seem crankier than usual, it has nothing to do with the soiled underwear (and socks-- he totally stepped in it) that we left in the dentist's bathroom.
Posted by Sarah at 10:49 AM

LOL we had to leave underpants in the boys' room at church. Charlie walked out of the building sobbing "Why you throw away my underpants?" It was a proud moment, indeed.

I am terrified of going to the dentist. I only go because they do such a good job on my coffee stains.

I have a super real fear of dentists. I don't know if I would have gone.

I am sorry about the gum. I think Evan would die on the spot if he was told no more gum. He's a gum-a-holic. It's his whiskey, I tell you!

I don't like dentists - even if they themselves are nice and do everything they can to make the experience tolerable. It is just not fun. Add in the poopy accident, and I would say that was not a good way to spend the morning!

LOVE the post title - made me laugh out loud! And I HATE going to the dentist. Probably comes from my visit where they found 9 cavaties. Which just goes to show that giving up soda in favor of apple juice was not a good idea - who knew there was so much sugar?!?

Sorry about the gumballs, and the poop...

And damn you for the reminder I have to find a dentist. I hate the dentist.

Hilarious. Sorry to laugh at your expense. Sorry about the gums. That gumball diet sounds like it might work, but why not sugar free chewing gum?
If it makes you feel better, I found underwear with a full turd in them next to the laundry pile day before yesterday. Hunter had a messy wiping incident dad cleaned up, but he never actually check the toilet to see if the poop was in there. Nope. I found it though. Lucky me.
I'm blogging about it today.

No more gumballs? Bummer! The sacrifices we make for a healthy teeth and gums – but I think that’s better than risk cavities and losing your precious teeth. I hope giving up those sweets was worth it, and helped you get your dental health back in good shape. Good day!

Byron Kennedy @ A Plus Family Dentistry