Because I have let grooming and general personal hygiene take a sharp tumble over winter break*, I managed to yank on my yoga-pris, sports bra, t-shirt, and hoodie in record time this morning. Add another 30 seconds to slather my face with SPF wrinkle cream and 30 more to scrape some of my hair into a Pebbles Flintsone-esque pony tail, and I was still ready 20 minutes before I needed to leave to take Harry to school. The boys and I played for a little bit in their room, marveling at the weird stuff Jack has in his little talking Dora backpack (like make up brushes and a board book that has clearly been eaten recently). "Okay," I said, after a rousing game of spit in mommy's face and pretend to shave her with the razor from our plastic shave kit. "It's time to get ready to go."

Upon hearing this, Jack ran from the room. I found him here: 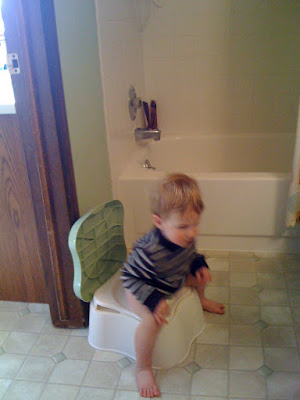 You know what else I found? I potty seat full of urine.

I was shocked-- he heard me say it was time to go, and he sprinted to the bathroom, pulled off his pants, and peed in his potty seat (the potty seat we got him because he would grab his down-theres and try to disrobe every time Harry peed for a few weeks a couple of months ago, and we were worried that we were missing some unique, self-directed potty training moment).

Of course, Harry and I clapped and cheered and called Ben to tell him the happy news and generally made such a big deal about it that Harry ended up being late for school. For the fifth time this week.

After I worked out (see? a reason for the yoga-pris and hoodie), I took Jack to Target and told him he could pick out any toy he wanted because he did such a good job peeing in the potty. He selected this one: 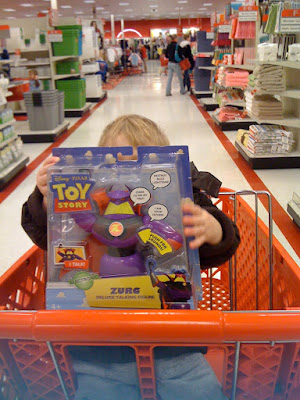 which we actually already have at home, but that one is Harry's, and Jack gets the shit kicked out of him when he touches it. Or looks at it.

Moms of 2 close in age, I recommend this bookThe Just Alike Princes. It's not in print anymore, so we have a used copy I found that is all beat up and looks just like the one my grandparents had at their house when I was little (they had twin boys, just like the little princes in the book). At one point in the story, Prince Abner Elmer Tom and Prince Albert Edgar John fight so much that their father the king decrees that they have 2 of every toy. That's where we are right now.

Then Jack and I enjoyed a Target/Starbucks treat before heading back to Harry's school to watch swim lessons.

I know I complained last month about Jack dropping his morning nap**, but in the last few weeks, I have come to love my time with him-- he's suddenly a tiny man, who talks and understands jokes and is generally thrilled to have me all to himself. We're best friends. 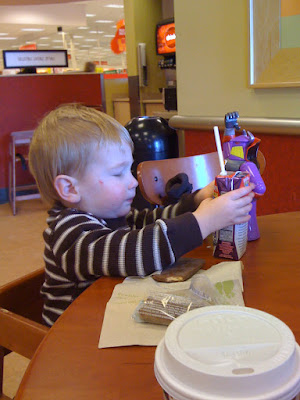 How stupid, by the way, are these instructions?? 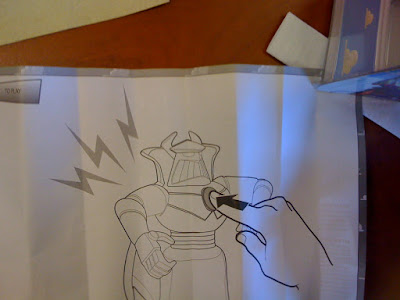 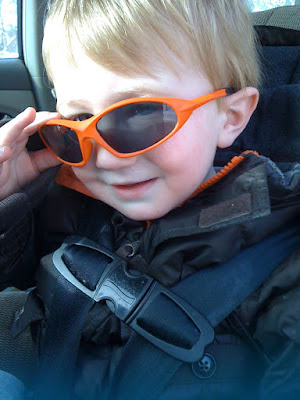 So not wearing a shoe and sock 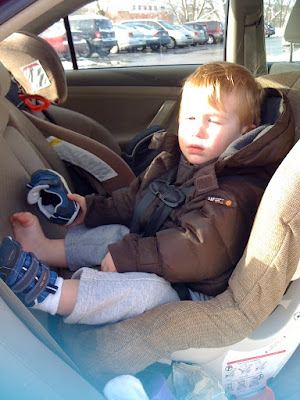 A small accident with his milk box 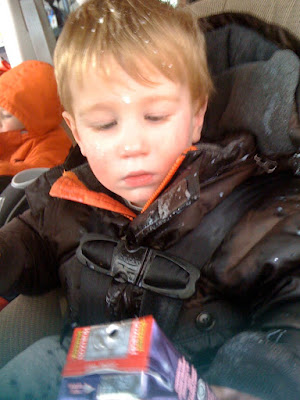 sleeping while eating his lunch like Harry used to at this age. 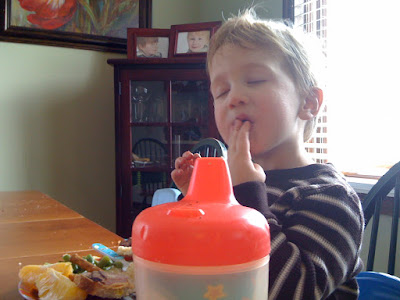 *I am IN LOVE with Lancome Renergie products and with Lancome's Creme Radiance face wash-- because of my new night cream, lifting and firming day cream, and foaming cleanser, I wear much less make up because my skin is AWESOME. Seriously, years of redness and small bumps that I thought were just part of my face are GONE. So my new low maintenance routine is not all teh lazy. But some teh lazy, yes.

** Part of this is my schedule. This semester, I have full days at work and full days at home-- the perfect schedule-- instead of working 5 part days like I did last semester. I am not rushed anymore, and I think that helps me enjoy my little man's company.

***I KONW he shouldn't be wearing a puffy coat in his car seat, but I am at a loss as to how to avoid this problem. It is arctic cold here, and we park far away most places because parking lots are full of plowed snow and have far fewer parking spots. My car is seldom warm before we get in it (except when he leave the house for the first time). So, I don't know how to avoid the coat in the car. I think I need a minivan-- we could climb in and shut the door and then take our coats off. I wouldn't have to undress them in a freezing parking lot.
Posted by Sarah at 12:44 PM

A.) totally fell in love with Jack in this post--not like I didn't already lurve him, but seriously.

B.) thanks for the Lancome tip--my face is in serious need of help and the Olay stuff ain't cutting it.

he'a real treat for mommas and Bommas what a wonderful surprise...he catches on to everything, and it sounds like he is talking more and more

That is so stinking awesome!!! I am hoping that Julia will potty train herself. Especially since I still have nightmares from the horror of potty training Elisabeth!

He is SO CUTE and grown up! Spontaneous potty usage? You are a lucky woman. I'll have to give Lancome a try because I am having some serious skin issues.

Way to go Jack! now if I could only get AJU5 to sit on her identical chair!

And as for the coat/car thing - yeah, no solution here!

A) my kids totally wear their coats in the car - hello, we lived in CO and now NE and it is COLD and SNOWING here. whatever. I make sure the restraints are adjusted accordingly, and they are still secure in my opinion.
B) I am totally going out to buy Lancome tomorrow. my face has been a little red too and not as clear asu usual, so I'm trying your miracle potions!

WHAT A STAR! THAT'S SO FUNNY! YOU SAID HE WAS FASCINATED WHEN H WAS TRAINING. APPARENT4LY HE PAID ATTENTION

I'm just glad someone else leaves them rear-facing beyond the 12 month/20 pound mark. Everyone gave me a look like I'm crazy when I did that with Allie. No one has said anything this time around...

Yay for peeing on the potty! How cool that he did it all himself :)

For the coats in carseat, there's a sneaky way to just unzip, weave belts to get them inside the coat (while still leaving the coat on) and then zip up outside of the belt. Here's the video (it went around my mom's group last year... lucky for you I'm a geek and still had it bookmarked...) http://www.youtube.com/watch?v=pLTVPqn0aR8

(and don't mind the screaming baby in the video... my kids don't scream like that when I'm doing it ;))

OH MY GOD! I just watched that video because I had no idea what the heck you were talking about. Kid's can't go in car seats with a jacket on? The comments below the clip were scathing! I mean those people wanted to kill someone for posting that very informative video with screaming child. How do you do it Sarah? I think the parental criticism would make me crazy. I tell ya, it's a wonder we all survived the 70's and 80's.

Keep up the good moming and if "they" comment just smack em and tell them to mind their own!

Way to go Jack!! I'm so jealous-Sutton is already two and still freaks out when we try to pull his pants down to try to use the potty.

I am so jealous that Jack went potty all by himself! Congratulations!

Aidan has zero interest, but is fully capable. Even the toys we bought as motivation have not done anything to get him interested. I see lots of fun times in my future.

I love the picture from Starbucks -- there is one in a Target near us here and Aidan always wants to stop and get some coffee for me and chocolate milk for him!

Way to be, little man!

Also, I've been addicted to Lancome, you know, for like 15 years now. Also a big fan of the Regenerie! It was a hallelujah-chorus moment, when I first discovered an oil-free night cream. Can I possibly be the only person alive who gets zits ON wrinkles?

I also highly recommend tinted Aqua Fusion for daytime. No more liquid foundation for me. Paired with Bare Essentials Mineral Veil, it's like being 22 again. :)

And I totally need to check out whatever you've been using on your face. I'm so tired of my constantly red, bumpy face. I've been told it's rosacea, but the crap from the dermatologist hasn't done a single thing and it's expensive as hell.

Both Jack and Emmie wear their coats in the carseat. It's too cold to eff around with the on and off and on and off and my god, what about when you're running errands -- I would shoot myself if I had to do it multiple times. Like Kate, I think they are secure, even with coats on. Besides, have you read "Nurture Shock?" Whole chapter on carseats that will make you think. The whole book kicks ass and would be right up your alley. Check it out.

Also, YAY JACK!!!! Emmie did it once like two months ago and now loves to sit on the potty, but sadly, never actually pees.