It's a time of day I don't usually see. And you know what? I don't feel like I am missing anything. Except, you know, the obvious. Sleep.

Ben and Harry are camped out on the couch watching Monsters Inc because Harry apparently does not sleep anymore after 12:45 am. Neat. Best. Phase. Yet. 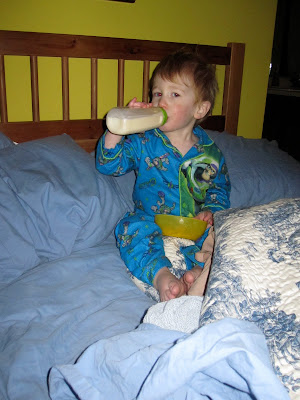 Jack is eating a bowl of Life Cereal square by square and drinking some milk. He's been in our bed since 11:50, making intermittent kissing noises and saying love you. Only thats not true. He's been smacking his lips together and saying hungry, but it took me almost 4 hours to translate Jackanese to English because it's the middle of the night. My eureka moment came when I remembered he refused all nourishment except cups of water and half a ZBar after 1 pm yesterday. I'd be hungry, too.

And, I love the picture of Jack. How cute is he? (even at an ungodly hour)

Crikey! Been there. Its so panic-inducing when you hear the kid talk a mile a minute like its middle of the morning when its 3 bleeping AM. Good luck!

Ugh. I am not looking forward to the days when we will have two sick ones and can't tag-team. Hopefully they are both better now and you can enjoy some sleep this week!

We just got the internet hooked up yesterday and I want to comment on EVERYTHING you've posted for the last week! But 10 minutes ago my alarm told me it's time to put down the laptop and get on with my day. Grr...

I'll holler at you soon.

P.S. We were also up at that time this morning (Eastern time now, yuk). I was getting my giant baby (read husband) ready for his first day of work. The new life begins...

I've missed your virtual self! :)