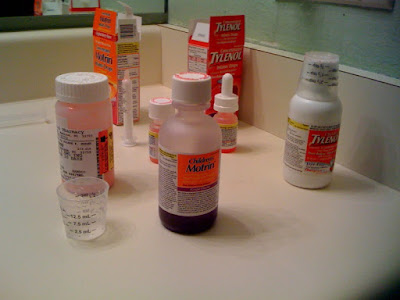 I should never have been such a smug asshole about how my little breast fed babies were never sick because this winter they have been sick sick sicky sick and sick some more. 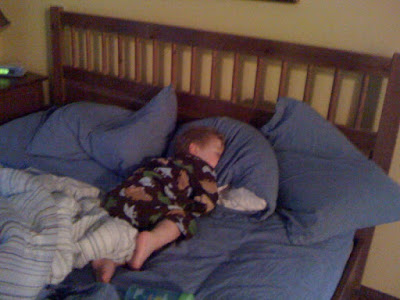 Has received his second clinical diagnosis of swine flu from the same after-hours, urgent care PA-C. He is going on day #3 of a 102+ degree fever. (His pediatrician, who told us NOT t take the Tamiflu that urgent care sent us home with, said it's definitely a virus-- duh-- but he doesn't know if it's the flu, but it could be despite 2 swine flu vaccines and a seasonal flu shot. He elected not to swab Jack, so we'll likely not know for sure anyway. Also, Tamiflu: is it something you have to pay for? Because our urgent care clinic just hands it out for free like candy that probably won't make you better but will likely make you vomit-- normal or not normal?)

Harry is currently enjoying his second double ear infection of the season (third of his life), and he puked amoxicillin all over the living room just a few minutes ago. We went to bed at 11 and were woken up by Harry at 12:45. He remained wide awake for 4 hours, complaining intermittently of ear pain, but we thought he was just being a pain in the ass because he took a 2 hour couch nap, and he told today's urgent care PA-C that his parents weren't very nice to him in the middle of the night. (Ben blamed me for the couch nap and elected me Prime Minister of Harryland last night while he and Jack slept in our bed until after 8) (Jack until 9:30, actually).

Now that I have changed my puked on clothes and scrubbed the floor on my hands and knees, I am off to cajole Harry into trying those meds again, which should surely be an easy sell, right? Right? RIGHT??

Um, Julia is sick ALL THE FREAKING TIME. Not exaggerating. She has had all sorts of diseases and illnesses that I hadn't even heard of. She was breastfed for 14 months.

Elisabeth is RARELY sick. Has been sick more since Julia joined the family than she has ever been the 5.5 years preceding Julia. I formula fed Elisabeth.

It's all hogwash, I say. HOGWASH.

I am so so sorry Sarah. That's awful.
Hoping the boys feel better soon and you and your hubby don't get sick...

Yuck-O! LOL at what Harry told the doctor. Gotta love their honesty. Once Charlie asked me if his post-doctor donut could have sprinkles before the doctor even left the exam room. It was a proud moment.

Sarah, I've been in your shoes and it's awful. Have u tried mixing harrys meds with a shot of orange juice? It worked like a charm with Bella. Especially if you add a straw :) Gina

I am NOT telling you what to do...however...major revelation this year when I was introduced to probiotics. Sam was sick non-stop (not breastfed, so I assumed it was my fault) but turns out it was allergies (wheat, milk, yeast, gluten...) anyway... the probiotics are a GOD-SEND. No joke. I know you can get them at health food stores. Take them daily. Sickies are gone.


They are magical. More magical than Lucky Charms.

OMG, I love that Harry outted you to the doctor. LOL

so sorry they aren't feeling well; that's the worst!