On Sunday, Ben and I tore the upstairs of our house apart and battled against the toys that are threatening to overtake us all.

I don't really have any before picture of the kids' room, but this is the refuse that remained in the hall after we put it back together: 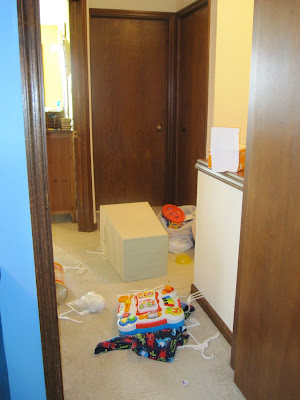 Our room suffered, too, because we were trying desperately to juggle our books around and find more shelf space somewhere because we have no space for more shelves. 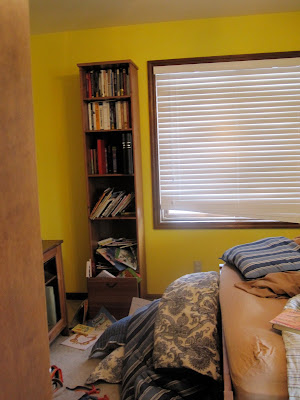 We also moved the furniture downstairs and "made" the boys "help" us muck it out. There were several small socks under the couch. Also many chocolately cat cookies. 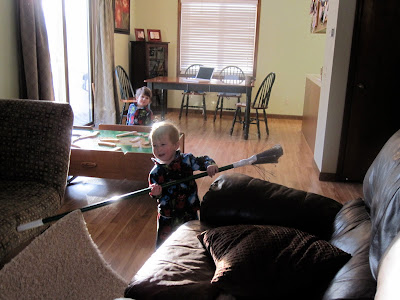 Harry was gleefully using the central vac to sweep up the behind-the-couch crumbs (his favorite thing to do on Sundays is to move the couch and TV console and see what's fallen behind them) when he sprinted across the room to suck up dust bunnies under the train table. Either those were some bad dust bunnies, or he is a psycho cleaner like me. 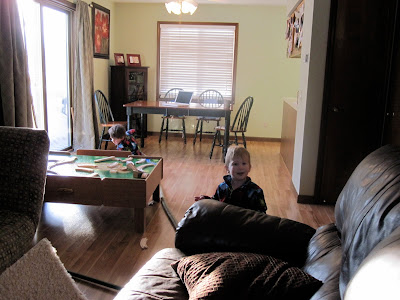 Harry and Jack were agitated during the whole cleaning process-- the way zoo animals (maybe higher order primates, but really, I'm thinking more along the lines of bears and maybe giraffes) probably are when their pens are shoveled out and rearranged. They sort of snorted about, sticking their noses into everything and pacing nervously around the room. (sounds like rhinos, come to think of it).

We distracted them with movies and candy so that we could actually toss some stuff out and assemble a bag for Goodwill, as well as a bag to go in the crawl space. Which? Could also use a good purging BECAUSE WE HAVE OUTGROWN THIS HOUSE, DO YOU HEAR THAT HOUSING MARKET? DO YOU??

I took pictures of the end results because we spent a whole day doing it, and I wanted some documentation.

This toybox is just for stuffies, 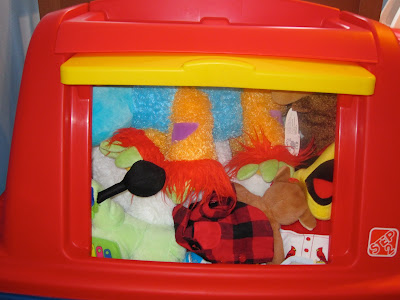 and this one is for super heroes. 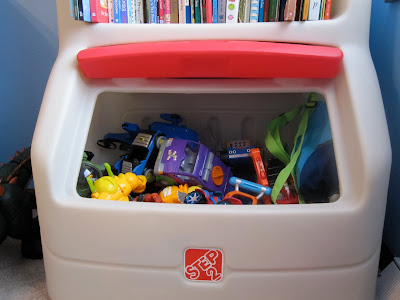 Here's the toy closet when you open the door. We have a bit of room to grow in the huge red bins and on the shelves. But only a very little bit. 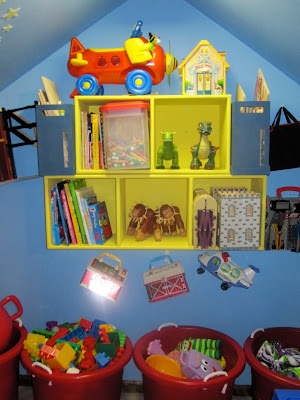 Cleaning out the stuffies, who used to hang out in a giant laundry hamper, gave us room for Harry's armchair and a basket of books in one corner of the toy closet 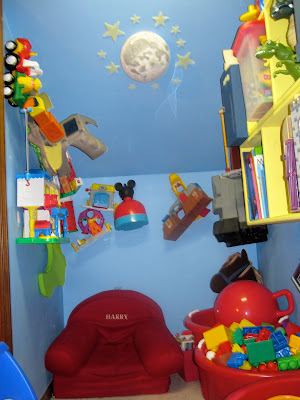 The view from the reading chair 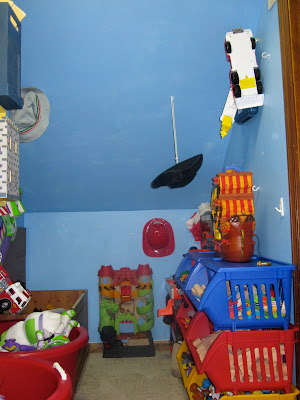 Jack has just started to play with the tool bench in the corner. That's why it's hard to keep our toy closet usable. We have so many big toys and just when Harry has tired of playing with one, Jack falls in love with it. 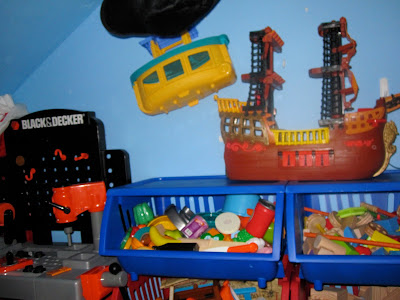 I like these new bins so far-- they hold a lot of toys, but they don't take up too much room, and they provide some nice flat space on top where we can store big stuff like the pirate ship in the picture. I am not sure how I'll like them after they have been totally dumped over, though. 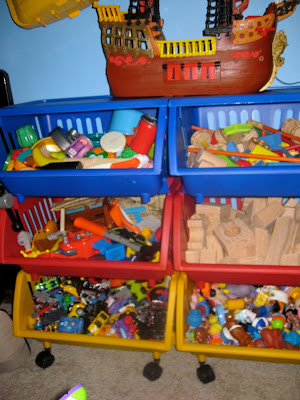 Cleaning out their closet is NO FUN. I have to go through everything an decide if it is a donation, something to pack away for future offspring (who let's face it, will probably all be boys), or something Jack will grow into. Then, all the soon-to-be Jack clothes go on a bar behind the bottom bar, and I try to hang them up in order, so that the 2T summer stuff, for example, is first in line to move up to his real clothes bar. I don't always remember the back bar, though, which is why jack currently has 26 pairs of pants. Oops. Also why some really adorable stuff (like an argyle cardigan I loved and a whole slew of 18 month attitude tees) never got re-worn. In addition to clothes,newborn crap that we're still hanging on to, sheets and blankets, and old shoes, their closet now holds toys in the red and blue bins because WE HAVE RUN OUT OF ROOM EVERYWHERE ELSE IN THIS HOUSE. 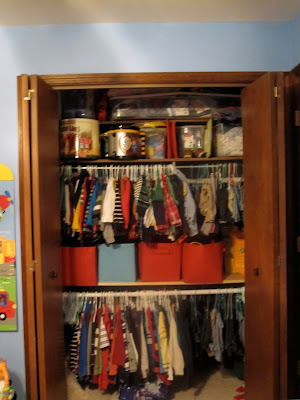 That's it; if we buy one more book-- even a slim Scholastic book order book-- we are screwed. 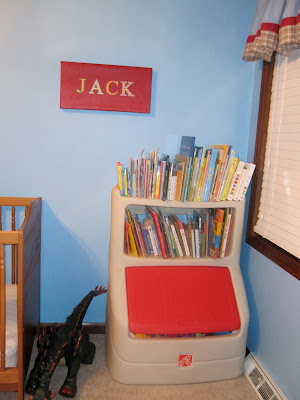 Despite our best efforts, though, the crap is spiling over into the actual room part of their room. 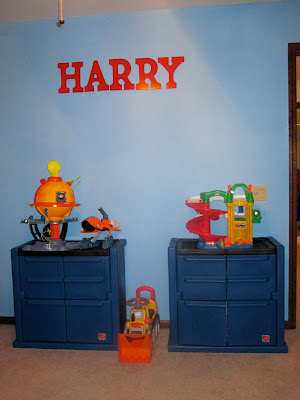 The chair and basket of books? A big hit with the monkeys. 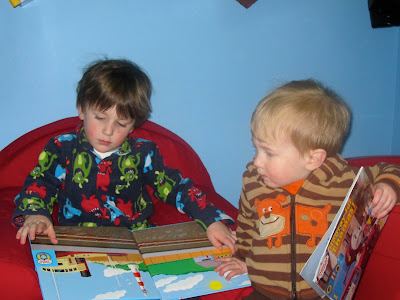 He doesn't care that his name is not on the chair. 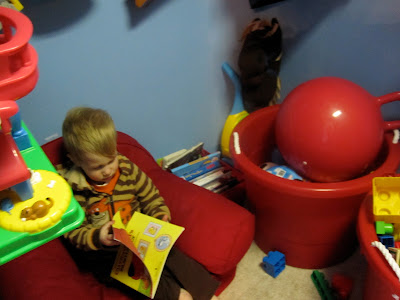 looks great! I have got to do a purge of out playroom which I am SO not looking forward to. It's amazing that we got all this stuff in a house half this big only 6 months ago - this house seems so full! I also need to do a big clothes elimination - and force myself to get rid of everything except the barest of essentials for a possible future newborn since the chances of a fourth kid are probably slim to none. Good job on all the hard work!

The colors in your house make me extremely happy.

I need to do this with our toys and the girls' rooms. Because when we decide on baby #3 (which, let's face it, will most likely be a girl) I'd like to be more organized than I was when Julia came around.

I've decided to invest in some under the bed storage containers. I shall see what magic they can bestow on the girls' rooms.

I love toy purging. There, I said it. We had a million people come over for Christmas dinner so Ryan "cleaned up" the playroom by throwing half the annoying junk into a closet. They didn't miss ANY of it. So it is gone. A million times easier to pick up. Except for those damn bins that get dumped out at least once a day. Grrr.

The satisfaction that comes with organized toys should be marketed and sold in bottle form. It's so fantastic. You guys did a great job, I love their toy closet space :)

I'm so inspired by your house! I've been stalling the toy purge because that means I have to find a place to store the stuff we keep. I especially love your toy closet. So cozy!

I say if the bin cannot be tipped over, it will be completely emptied nonetheless. Our toys are in large wicker baskets that are too awkward for the kids to pull over, so they just stand next to the basket, grab something, hurl it behind them with amazing force, and then grab something else. Toys everywhere! I don't mind unless it's a car or train and I step on it because that hurts!

I love the toy closet with the reading nook -- so cute!

this is seriously impressive. And I agree w/ Virginia, the colors in your house are just happy!

So envious you found the time and energy to do this. I have yet to tackle the boys room, and more stuff to get rid of than I can imagine. I have a huge basement full of bins from each size the boys went through, just wishing that Theo decides he can deal with more babies. lol. Very inspirational!!

I have most of AJU5's toys in plastic storage bins. They are working well for now, but once she can open them on her own, I bet we will have a toy issue for sure!

Way to go getting everything organized. Now lets hope the boys "keep" it that way for mare than a week!

Q: How much did I love your description of your agitated children like primates? A: A lot.

Also, we have the same pirate ship.

Seriously hate cleaning out their closets and taking clothes to good will. Seriously love when it's all done and there's room in the house again!! I love a good purge! :) Looks like a productive weekend!!