I would call this a stream of consciousness, but it's probably more like a trickle.

Dude, you guys, I met a blogger in real life. And I got all socially awkward all over her, which is really, really a bummer because she's a mom of a kid in Harry's preschool class, so I can't just be like "Oh well. We'll probably not run into each other again" because we will. (And I am rarely at my best at preschool drop off-- usually sweaty, no makeup, in cropped sweats, carrying too much stuff, and fragile seconds away from losing it all over my kids, so I guess approaching someone with a blog business card is kind of low on my list of worries) I may or may not have given her my blogger business card from BlogHer. (May have).

But seriously. I never meet bloggers in real life except for that one awesome weekend in Chicago, so I just got excited.

Anywho, the blog is in my sidebar: Mom Appeal, and it's awesome. Check it out!

Harry and I did SO MUCH COOKING yesterday.

First brownies (TJ's truffle brownies-- love them). Harry did an excellent job dumping the mix in the bowl, but he required a bit of a vacuum because he was covered in brownie dust. Which is a lot like pixie dust only it is delicious and makes you too fat to fly. 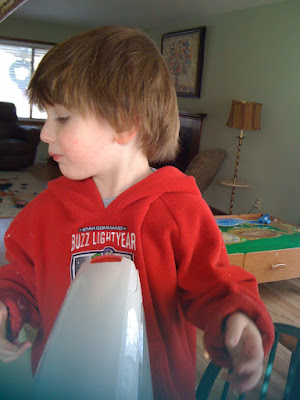 He poured in the melted butter and did such a good job cracking two eggs that he said, 'Wow. I cracked those eggs just like I was a person." Indeed. He whisked everything together and used a spatula to slap the mix into a greased (and coco-sprinkled) baking dish. 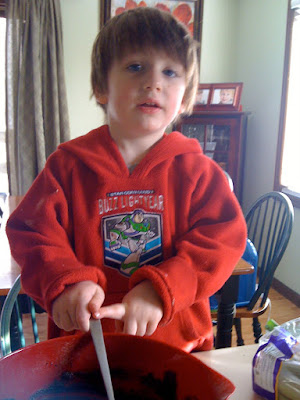 I left him standing by the mixing bowl for 2 seconds while I bent down to pop the brownies in the oven.

When I stood up, I saw this: 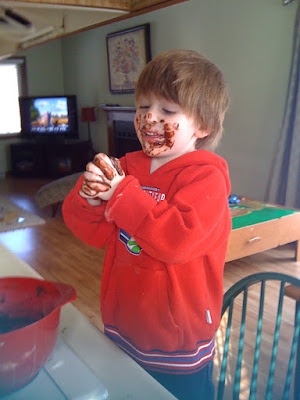 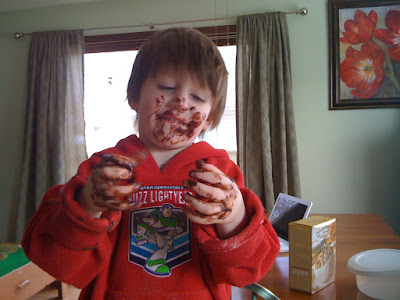 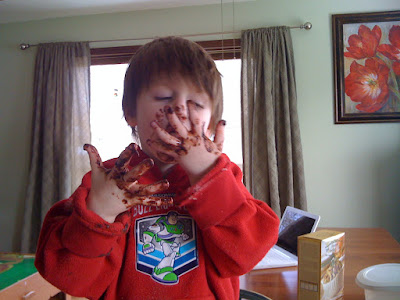 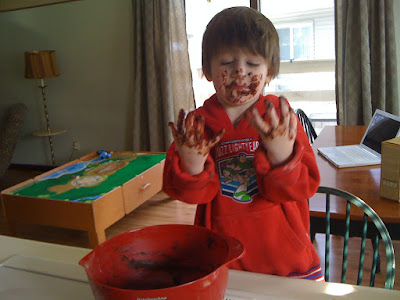 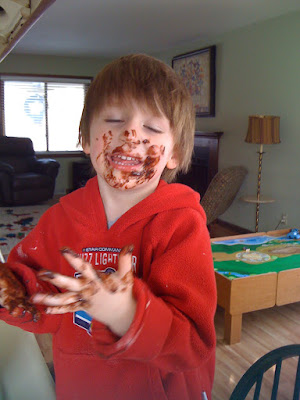 A quick wipe up, and we were onto preparing green beans that we ate last night. 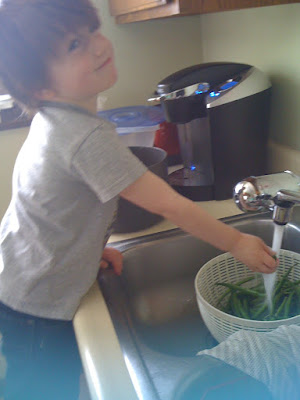 and snapping them. Although, he didn't snap for long, launching instead into some elaborate fantasy where the little beans inside the big beans were his babies, but then he ate the babies. I don't know. It was weird. 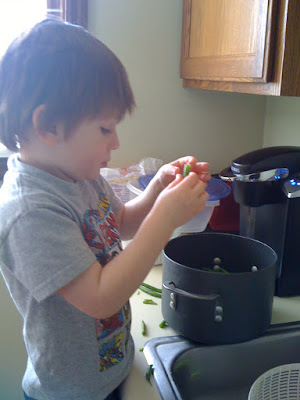 He always likes to spin the salad. Always. So does Jack. They will drop whatever they are doing to come spin salad, the little weirdos. 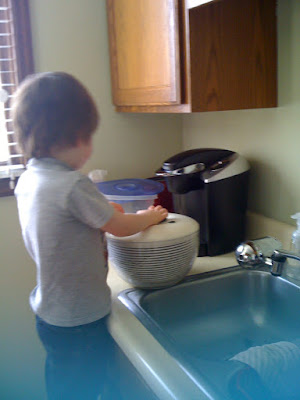 After brownies, beans, and salad, Harry helped me coat my cupcake pan with lard (yum, lard), and he nestled 2 frozen dough balls in each cup. He said they were snuggling. Then we smeared lard (yum, lard) on some Press 'n Seal wrap, covered our snuggling balls, and let them rise on the counter for 5 hours. Harry and Jack are suckers for rolls and butter with dinner.

Then Harry scampered away to "play guys" leaving me to cook 2 kinds of chicken breasts (BBQ and cheese-and-asparagus-stuffed), blanch a bunch of veggies for dipping, chop more veggies for Harry's spun salad, and make a box of TJ's cornbread stuffing, which smells great and I hope tastes half as good as it smells. I try to make 2 meals on Wednesdays-- one to eat on Wednesday, and one to microwave and eat on Thursday. The nights that Ben and I both get home from work at the same time are terrible unless food is immediately (like 7 minutes or less) ready to serve. Ugh.

Any tips for smoothing the dinnertime rush if both parents WOH?

When Jack woke up, the three of us made a pilgrimage to our holy land, stopping at the snack bar for mango smoothies and a muffin. 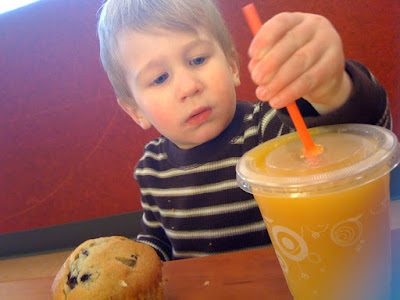 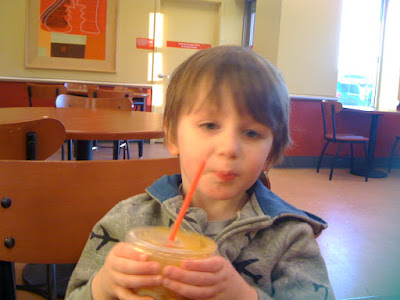 We also had to go to the super hero aisle just to stare at crap. Boy was that fun. Then I made the kids go to the bedding aisle and stare at crap because I noticed a giant sale sign out of the corner of my eye and wanted to see if my fears were confirmed. They were. All of our bedding is half off about 2 days after the price-adjustment window expired. **Grumble, grumble** 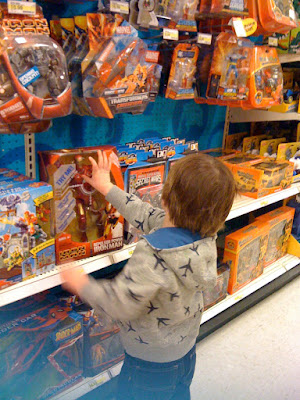 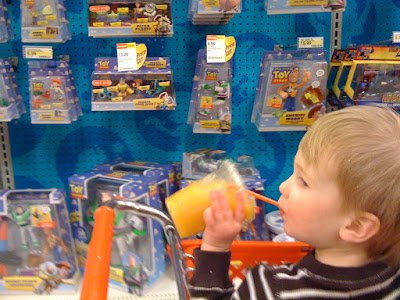 The reason we went to Target was to grab snacks for preschool because it's Harry's turn to bring snack next. I HATE the snack policy at his school because we can only buy food from the approved snack list, and none of the food on the list (with the exception of fruit and veggies) is what I buy for or feed to my kids. Juice? Nope, not usually, and when we do buy it, it's not the kind on the list. Crackers with hydrogenated oil or chemicals I can't pronounce? Not usually. Applesauce whose second freaking ingredient in HFCS? No. I need to stop complaining about it when Harry is in earshot, though, because he showed Ben the snack we bought and said, "Really dada. Who feeds this to their kids?" 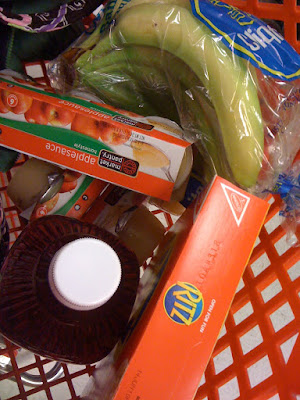 I do. I mean what the hell do I think was in the muffin or the smoothie? Right? Somehow, though, seeing it on a label is worse for me. Which is why we are going to McD's for lunch tomorrow and why I would prefer to pay more tuition and have school provide the snack. DON'T ASK. DON'T TELL. Not good for the military. Good for my food intake.

MOTY strikes again. (yum lard) I know, nonsense, right? But 3 times is funny.
Posted by Sarah at 7:05 AM

Thanks for this Sarah. Hi-larious. Those pics of Harry in the brownie batter? Save those for his first date.

Because honestly, wouldn't Ben have done the same thing? :)

One word for mealtime - crockpot (or is it two words, I don't even know). The crockpot lady has a TON of recipes on her site and it is excellent to walk in the door and have dinner ready. Most of the time we have to come up with a side (rice, potatoes, vegetable) but still a million times easier than making something. One of my recent favorites is a recipe for pot roast that if you add chunks of potatoes and carrots to the pot will have a total meal when you come home: http://www.recipezaar.com/To-Die-for-Crock-Pot-Roast-27208

Ha! I love the cooking pictures! Especially the bean part. Though odd, it's totally what my kids would do.

I get grumpy because you can't bring in homemade treats. Dude, it's way easier for me to just make the ding-dong cookies than to decide what crappy ones I should buy at the store.

Oh, and when I used to work (ages and ages ago, it seems) and Evan was in law school, Thursdays were our late days. Those were deemed crock pot dinner days. I'd prep everything the day before, throw it in in the morning and forgetaboutit.

Love the brownie batter pictures! I love a kid who likes to cook!

Also, the snack thing would piss me off too. Why can't everyone just bring his own snack if they're going to be so weird about it?

Isabelle totally will only eat the little beans out of the green beans - and she insists we peel them for her and present her royal highness with the tiny beans, tkaing the offending outside away. needless to say we do not have green beans very often.

The whole snack thing is such a pain, although it doesn't sound like our list is as particular as yours. I think I brought Annie's bunny crackers on our turn (which aren't that great, but don't have the dreaded HFCS)- and our kids drink water which I prefer. I almost never let the kids have juice unless it's watered down because of thue sugar, but I'll feed them cookies, and chocolate and McDonalds cheeseburgers. Duh

Isn't it unbelievable how they mimic everything we say?

The other day Ethan's friends were leaving our house and he came running to the door w/ a billion cheese sticks and said, "Does anyone want a cheese stick for the road?!"

And from now on I am totally making Ethan help me with dinner.

I can't believe they regulate what you an bring for snack down the knitty gritty!?! Absurd. We can bring whatever, pending food alergies. This year there is a slight nut allergy in one kid. Ben did snack last week, and Hunter is in 2 weeks. :)