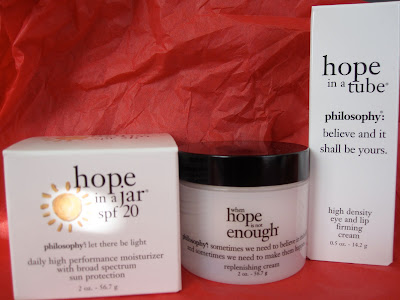 I know; I know. I was just telling you how awesome my Lancome Renergie skincare products were. And they were. For approximately 3 weeks until my cycle started to, you know, cycle, and my skin got all red and crappy again. About this time, I ran out of the samples I had been using since Christmas and prepared to go to the Lancome counter and replenish my supply.

That's when I did the math and realized that night cream, day cream, and eye cream would cost more than my auto insurance deductible (it just seemed like a relevant number for comparison's sake). And my skin still looks kind of crappy, though not as crappy as it did when I was using knock-off Aveeno stuff from Target. Knock-off Aveeno? Clearly, my skincare regimen was in sad, sad shape. So today, after doing a bunch of research, I went to Sephora and got the Philosophy stuff pictured above. People like it. It smells good. It's pricey but not that pricey. If I don't like it, I am going to try Aveda, Clinique, and L'Occitane (in that order) before moving on to Lancome again-- which, don't get me wrong, I like Renergie but I don't loooooove it like I did a couple weeks ago. I used to work at a Lancome counter, so I have a soft spot for those products, but I also want to explore my options. Any recs?

I'll keep you posted because I can't talk to Ben about my product angst-- he said to buy whatever I want; don't tell him how much it costs, and don't make him pretend to be interested in it.

Jack's snowman onesie cracked him up all morning. 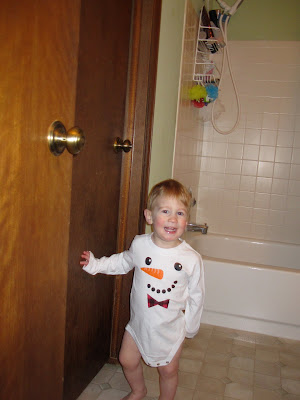 He couldn't stop staring at it 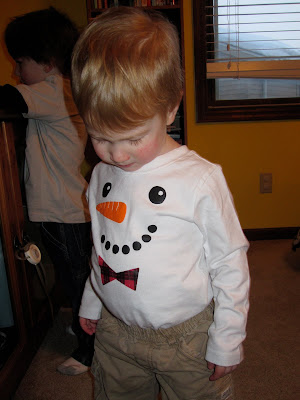 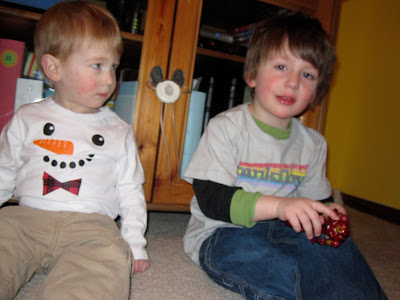 He asked me all day to get out the easel he got when he turned 2 (that's how he refers to it-- every time). He drew like 3 strokes with a hastily chosen red marker 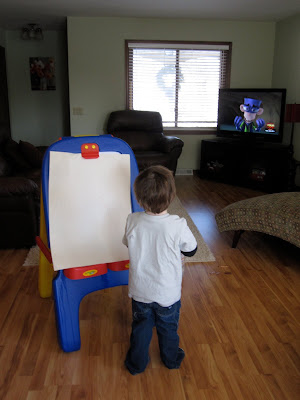 and then crawled underneath it because it's NOT AN EASEL. IT'S A BAT PLANE, YOU FOOL. 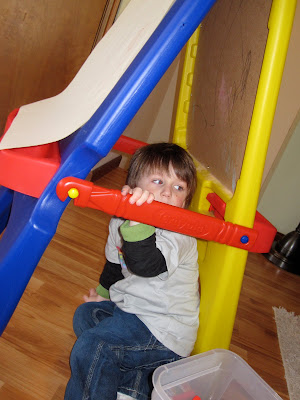 what is it with the nose changes as we get older? mine seems all extra pointy and pokey now. I hate it. I also have these ridiculous creases in my forehead from being a facial spaz. I have no lines anywhere else and I hate the ones on my forehead but my husband won't spend the money for botox so I'm stuck with them. my plan at the moment is to cover them with bangs.
can't wait to hear what you think about the Philosophy creams - I don't have any recommendations for you since I'm using drugstore stuff and don't love it at all.

ps: your kids are darling

I just started using the Clinique 3-step routine. I realize I'm about 10 years behind on this, as it was THE THING to have in middle school (okay, make that 14 years behind), but I needed something simple and delicate on my sensitive skin. I really like it and somehow actually investing money in my skin care, rather than buying the cheapest thing at Target, makes me use it more often. I'd say I know go to bed with my makeup on only once or twice a week as opposed to every day. Baby steps.

Good luck w/ the new skin regime... I'm so bad I barely take make up off at night, let alone put cream on. Yikes.
Love that snowman shirt, and that he cracks himself up :)

First, I love Philosophy SO MUCH. Their Purity cleanser is a thing of beauty. I got the jumbo sized bottle on QVC last spring--they said it was a 3-month supply, but I'm still going strong about 10 months in! :) Awesome.

Second, YOU ARE CRAZY. You neither have noticeable wrinkles NOR a "bulbous" nose. Please. You are gorgeous and everyone who sees you on a regular basis is in awe of your ability to keep it all together and look amazing doing it. Srsly. Like...this is what we say about you when your name comes up. "I don't know how she does it! I don't have two kids and I STILL can't manage it!"

You ARE gorgeous. For real. I also don't know how you do it.

I use Dove bar soap in the shower in the morning, then apply Oil of Olay whateveritis all over and then use Purpose cleanser at night and slather on some more O of O. This is the ONLY thing that works for a price I am willing to pay.

Also? Hormonal skin changes? ARE A SICK JOKE. How are you supposed to find a routine that works when everything is different every single day?

I am absolutely awful about my skin care. My grandma (the Jafra lady) and my mother (the Avon lady) are so exasperated with me.

I am trying (trying being a very loose term) to remember to actually take the time to wash my face and moisturize. I never wear make up, so there's no incentive for me there.

Also, that snow man shirt would be a fabulous addition for my fat, fat baby's wardrobe! Jack looks adorable! No wonder he couldn't stop staring at it!

I've been meaning to try the Philosophy stuff but just can't get myself to pay for it (but really, if it's something I use every day the cost sort of works out to be not quite so bad...) Right now I use some knockoff Neutrogena day cream from Target, an Aveno sensitive skin cream mixed with a L'Oreal night cream at night (so technical!) and sometimes the Murad blemish cream (it's got sulphur which seems to work and not dry out or irritate - hooray!). And the wash is all over the place - a Neutrogena, an Oil of Olay aging one and Cetaphil. But yeah, I'd like to have something a little more organized and not so mish mash - because really? How the hell am I going to remember what to buy next time I'm at the store!?! And stop with the crazy talk - you're the cutest!

I am so like Virginia - it is a miracle if I remember to wash my face at night before bed (I wash it in the morning in the shower). Because I tend to have oily skin and we live where the house is humid during the summers, it is even harder to remember to put on moisturizer in the winter!

And your kids crack me up!

WHAT is it about the nose?!!! I took a 'self portrait' of me and Ethan yesterday and it's the first time I've ever thought--eff this! I need a nose job!

There is nothing worse than seeing your own skin and features so close to the soft, perfect, poreless, pale skin of a preschooler.

I tried the Philosophy stuff a couple years ago--it was good, but not enough to win me over for the long haul (clearly b/c I'm using some crap Olay stuff now that's going to get kicked to the curb soon.)

Hi there, just stumbled on your blog from LL's. Thought I'd let you know that recently I started using Avon and I'm very pleased. It has an excellent price/quality ratio, and the products are backed by a 100% money-back guarantee. (Well, here in Italy anyway, but I assume it's a world-wide corporate policy...)

I have sensitive skin and after one baby and now being prego with the second, my skin is all confused. Plus it doesn't help that I keep trying new stuff. Every time I use a new product my skin freaks out for 2 days. Usually the samples they give you at Sephora don't last long enough to give my skin time to get used to them, so that's why the Avon money-back guarantee was appealing.

I think in the US you can just order online and don't even need to go through a representative; however it looks like one of your commenter's mom's sells it, if you wanted some personal advice from someone that knows the products. Or you could contact me and I'll tell you what's worked for me...

Oh and PS: the key, so they tell me, is not the specific product but rather the "simple" step of washing your face before bed and using a moisturizer, because your face regenerates new cells and replenishes itself while you sleep. That's why I like switching products every now and then - having new stuff renews my motivation to wash my face at night...! ;)