Yeah, it was early to set the dinner table 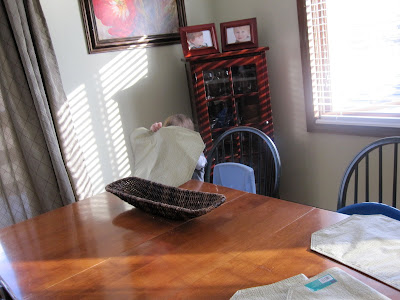 but he likes to do it, so what the hell.

He takes pride in turning all the place mats over so the tags are hidden, and he tries to keep the napkins neatly creased.

He geeks out over multiple forks and knives and figuring out where they go. 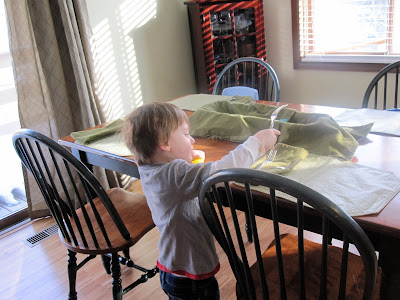 He's not, in short, screwing around. 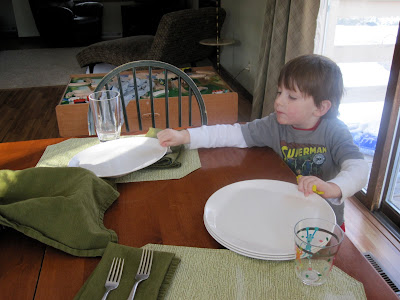 I did this thing today that I do not recommend you try at home. I worked really hard from the moment I woke up (hungover, so, so hungover on wine and so, so pissed off at the world. at preschool drop off, I had a hard time maneuvering the circle drive, and I was so annoyed at all the minivans with their hazard lights on just parked wherever the hell their drivers wanted to park them, red zone or not, that I harangued the unsuspecting office staff, making H late for school and J late for Little Gym, which was good because we missed the bells, and I don't think I could have handled the bells today) checking things off my to-do list, figuring that when I finally had time to veg, it would feel so good because I'd have nothing hanging over my head. So I got up, actually took a shower, went to gym with Jack, grocery shopped, worked out, fed the kids some lunch, put Jack to bed, put away all the laundry, made brownies and garlic bread for dinner, helped Harry set the table, washed the floor and then collapsed on my bed to read a schlocky novel. For 10.5 minutes before Jack woke up Grrrr. Tomorrow, loafing will be much higher on my list.
Posted by Sarah at 8:42 PM

YES! I did the SAME THING! How the heck can the sound of a coffeemaker and a magazine being opened wake up a child sleeping in a closed bedroom on another floor?!

Ah, the joys of motherhood, your mother was great about napping as a little one, clear into kindergarten, next one came along, and she wasn't a sleeper...I commiserate, even after all these years...Bomma

You actually eat with placemats down for dinner? I'm impressed!!

The lack of good naps is hitting me this week. It is a lot harder to get things done when they both need me (or at least one does all day).

And place mats - impressive! I don't even trust myself with clothe most days :)

Your son's helpfulness is actually dazzling me right now. My daughter who's the same age is morally opposed to being constructive.