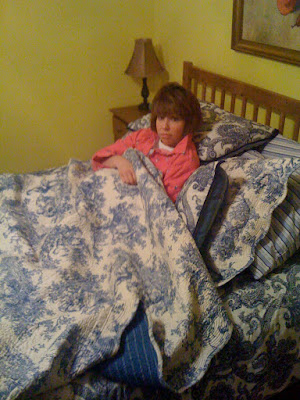 That picture was taken last night, and I am in the exact same place right now. I should probably take a shower, actually. But American Pie 2 is on, and it's really funny. Especially the superglue part.

I worked this week for the first time in awhile. 2 whole days. It was exhausting. I have a whole semester of that kind of labor ahead of me. I spent part of that time working on my super classy office wall art. See my super classy swiffer handle and $7 IKEA floor lamp? Only the best for my office. 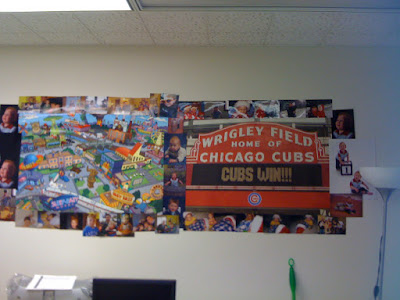 I felt okay yesterday going to the gym, dropping Harry off at school, watching Jack fall asleep sitting up on my bed while I took a shower (which should have been a clue that maybe he didn't feel so good, huh?) taking the boys downtown to have lunch with Ben, and tucking Jack in for his afternoon nap. Sometime during MTV's Teen Mom marathon, which I watched while folding the laundry and periodically running downstairs to reassure my Scooby-Do watching Harry that the villains were not real, I started to feel like total crap. 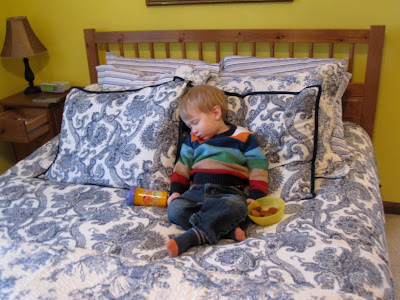 When Jack woke up, I realized that he, Harry, and I all had 99.something degree fevers, and Harry had/has a wicked cough. I felt so terrible, all I could do was use one of the kids beanbag chairs as a pillow and lie on the floor with my quilt watching them play.
Jack climbed up on Harry's bed and threw all the pillows and blankets on the floor. Then he stood on the edge of the bed talking to himself 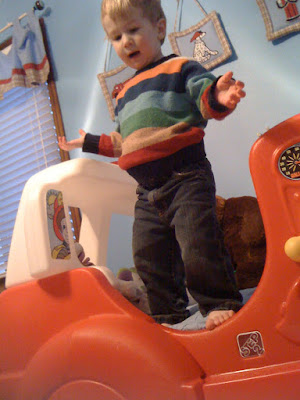 Before I realized what he was doing, he flung himself off the bed onto the pillow pile 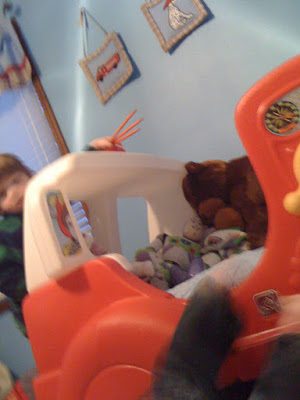 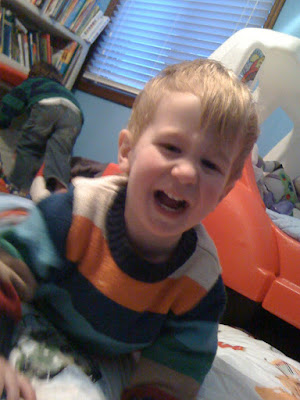 Jack has also developed a love for this dinosaur, whom he calls "Raaar." 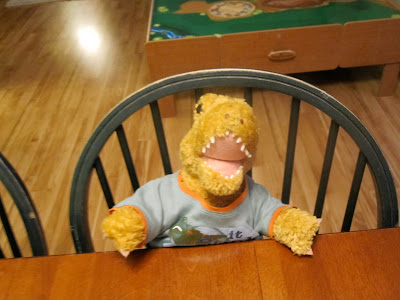 For some reason, the sight of him feeding himself like a little man is irresistible to me. 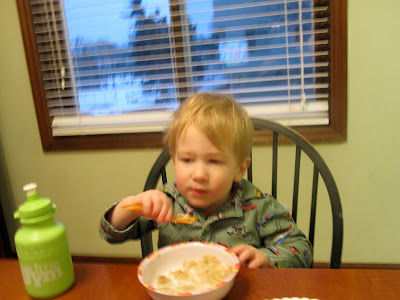 Every night before I go t bed, I sneak into the boys' room and cover them up. Sometimes I cup one of Jack's huge, hot feet in my hand and shove it back under his Buzz Lightyear blanket, and I almost always remove Harry's comforter from his face. The other night, I also took pictures: 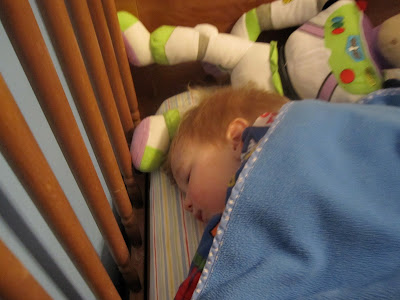 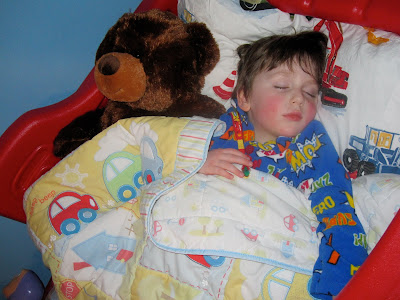 feel better soon,both you and family...those boys are getting cuter by the minute and Jackie is growing up so fast...Bomma

Also, I totally love that dinosaur. I am glad Jack has appropriated him.

There is nothing cuter than sleeping baby pictures!!! LOVE IT!

Raaar is an awesome name. I laughed out loud.

I hope you all feel better soon!!!

I hope you feel better fast. The other day this little kid was sitting in my lap and she was so cute and cuddly, and then she told me that she got sick in the car and had to change her shirt! I have been waiting to get sick ever since.

Feel better soon!! We're at the beginning of something... we were at the IL's last night and Fynn came down w/ a 102 fever, Paige's noses started running like a faucet, and everyone has been miserable since... 'tis the season...

Whenever my kids fall asleep during the day or in strange places I have a panic attack that a sickness is about to hit. Makes enjoying the nap difficult.