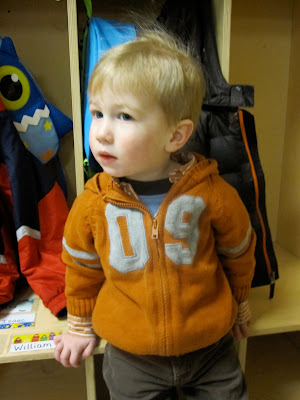 Despite looking a wee bit unsure in this picture, Jack was really excited to go to school today.

He almost cried because some of the other kids were crying, and he was like WTF guys? Are we supposed to be sad our parents are leaving? But how can we be sad? There are TOYS here! He was especially thrilled to find his name written on a snowflake-- just like HARRY'S classroom down the hall! 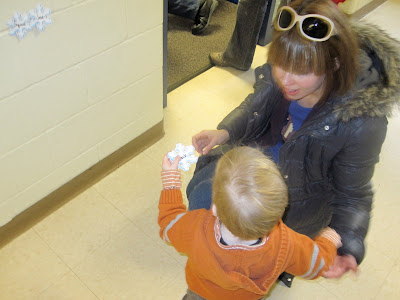 He patiently waited his turn to stick it on the door 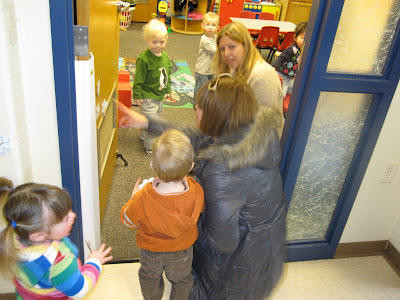 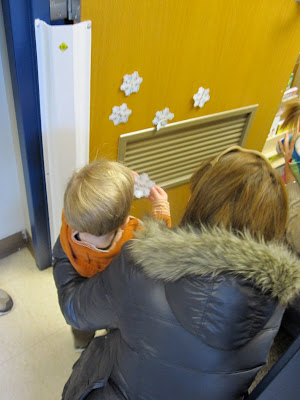 And then he toddled on in and waved to us.

As Harry's class was leaving the gym, Jack's class was filing in (and seriously-- how cute must they have been-- a line of 8 little 18-24 m/o's), and Jack saw Harry and burst into giggles. Harry, though, wanted to play it cool, so he did not acknowledge his little brother, citing, when asked, embarrassment at knowing that baby.

So, there you have it. Jack's introduction to organized education. Once a week for a couple of hours, I'll be on my own. WHAT WILL I DO WITH MYSELF??? Probably shower.
Posted by Sarah at 7:44 PM

I can't get the image of a bunch of toddlers under two filing in :) Must have been so so sweet!
(and whoooo hooo for some you time!)

I used to CRACK UP when the little class was walking around in a line at Charlie's old school. Cutest thing ever. Jack is adorable, seriously. I wish Wes could go to preschool because he cries and lunges for the classroom when I drop Charlie off. Stupid September birthday.

Hooray! I'm counting down the seconds until i can throw Julia into a preschool class. She'll probably cry though, since Elisabeth never even flinched when she started school. You have to have one of both kinds, I hear.

Of course Jack likes school and being responsible...look at his brother and parents...you all mzke me very proud and happy, Bomma

That sounds like heaven. I want a nursery school here! Love the visual of Harry ignoring Jack. Can't wait to hear how it progresses!

That Jack is one tough hombre isn't he? And I'm sure you'll find wildly productive uses for your new-found personal time. Facial? Pedi? Massage? And Harry's already too cool for baby brother. Harbinger of things to come no doubt.

Jack looked like a little Big Man on Campus! I love the outfit!