Even Though the Blogging World Has Clearly Moved on From Christmas, I Haven't

Proof That Dissertations Don't Write Themselves, as I am Currently Paying Harry's Babysitter for This Time Away From Home and Blogging, But my Draft Remains Stalled Mid-Chapter

My Expensive Afternoon: Hi, Honey, I also Stopped at Motherhood on the Way Here

Panera: Home of the Cinnamon Roll the Size of My Head. Yum.


I think that sums it up. So, I used all my words on titles. Here's one more barrage of Christmas, then I will officially accept that a new year has begun. I have already come up with a title for the year, too.

It's kind of wordy.

Even though it was December 29th, Harry brought his Christmas spirit. Yes. We all have Crazy Stripe sweaters from Gap. We stopped at Panera on the way to the burbs (yes. I know I have a problem, and I will deal with it after I have this baby, and I am trying to scrape roughly 30 pounds of mayonnaise off of each thigh), and one of the cashiers said "Oh, you're the one who has a matching sweater with your husband-- that's so cute!" I told Ben she said that when I got back to our table, and he shouted "Oh FUCK! I forgot we match," which I gotta say, was a tad bit more embarrassing than our matching, especially since we were sitting right next to this family who had the cutest little 6 year old. I know she was six because she told her dad, "I can get my own drink. I am six, and I can do anything," which totally reminded me of a certain someone I met in first grade, who assured me that I didn't have to worry because she knew EVERYTHING. (And no, Katie, I will not let that go. Ever.) 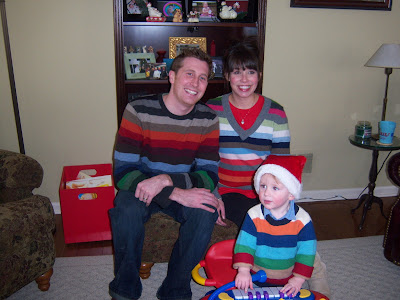 As you might imagine, Harry was a hug help assembling his shopping cart. 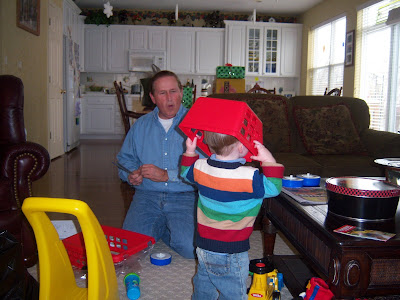 Harry got a sled, and he made his grandma and grandpa haul him all around the house. For 2 days. It was too cute to resist, though. He'd plunk himself down and say thank you before the ride commenced. No outdoor sledding yet because it's a high of 9 here (has been for days). Don't worry. It's supposed to be in the fifties this weekend, and our 35 inches of snow will melt in a flood of biblical proportions. Either way, outdoor sledding unlikely. On a related note, have you ever tried to sled down the stairs? 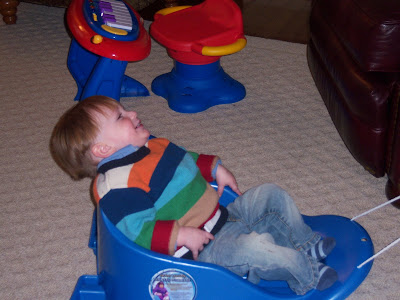 Harry is in love with this computer that his Aunt Jen and Uncle Maurice got him. He loves it in a Gary-like way. 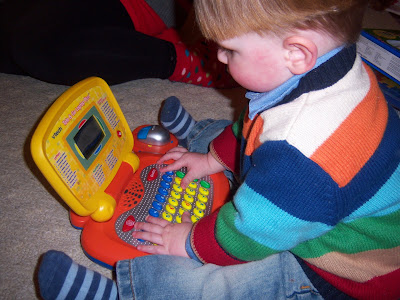 See? All the practicing we did with our camera timer really paid off. There's another shot where everyone looks brighter, but you can see my dorky socks, so I couldn't use it. You'll have to take my word for it, I looked cute in an 80s sort of way with my Uggs on, but damn, those things are HOT (not like sexy). 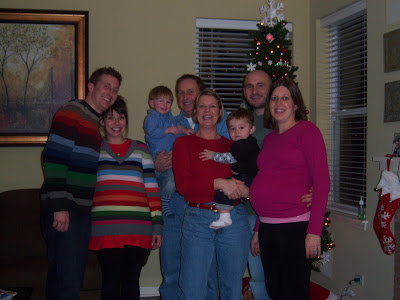 Awwww. We kicked Harry and max out of the picture because Harry was crying. 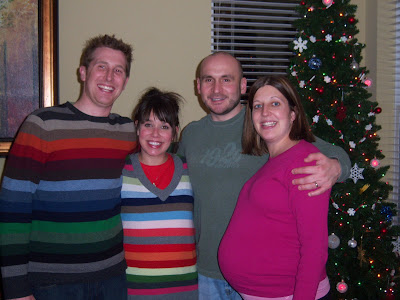 These balls were a hit. Except with Maurice, who was clearly calculating how many hours a day he would have to spend cleaning them up and how many pieces of furniture they could wedge themselves under. Answers: As much time/furniture as you have, but they are really fun to fling at your spouse's head. 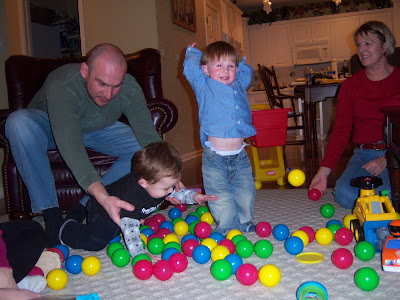 Harry in his grandpa's slippers ("hippas") 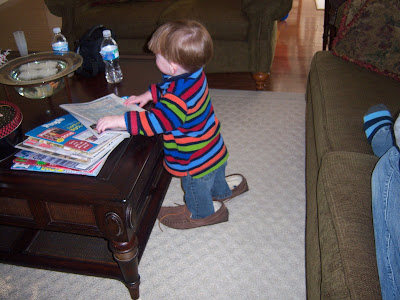 Harry sensed that the tree wuld come down soon and indulged in his favorite no no of the season one more time. 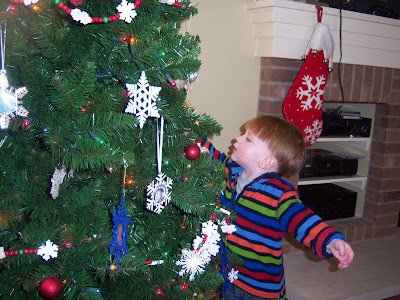 Even though they are still in the parallel play phase, Harry and Max did play near enough to each other to cast furtive and suspicious glances at one another. 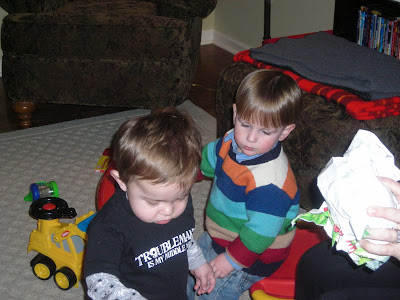 Seriously, the love of computer. Next thing you know, he is going to go to stores and stare at shelves for hours, stop six times at the gas station before taking a 12-mile road trip, or begin every trip with a "choke burger." Oh yeah! Happy belated 60th birthday, Dad! Also, see my dorky socks? 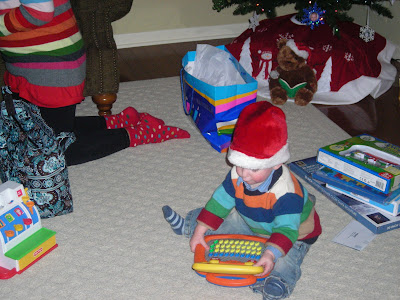 That's the kind of behavior that gets you ejected from the picture, young man! 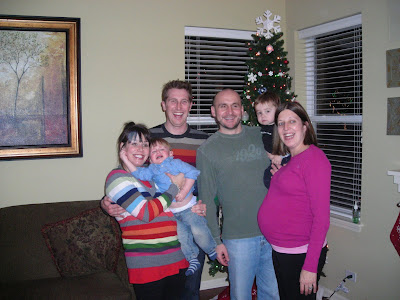 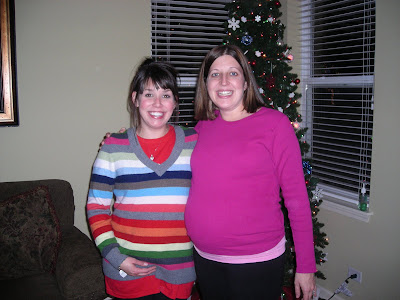 Okay, I know Harry just got so many toys that we had to convert our extra walk-in closet to his toy room (more about that soon), but I need to get him one of these (this one is strictly a grandma's house toy) because the microphone really works, and I want more than anything in the world to spend my spare time teaching him Volare and My Way. 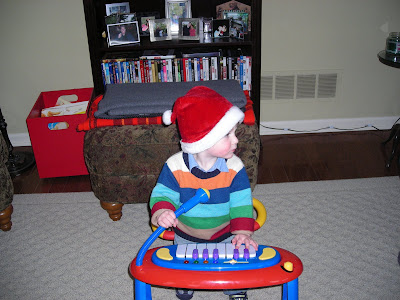 The next morning, he woke up and went straight for the computer. Then he spent hours emailing us YouTube clips, pictures of westies in Halloween costumes, and Bob and Tom recordings. 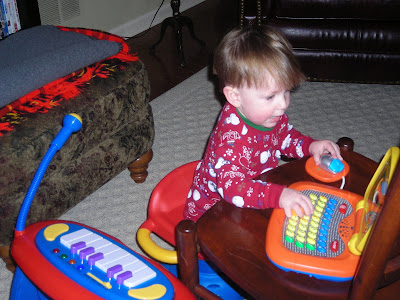 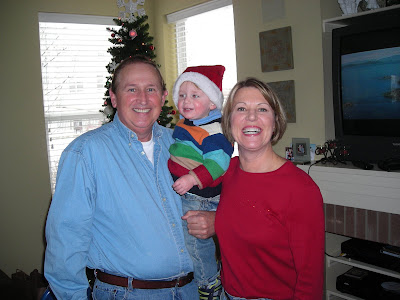 And now back to my chapter, which is fascinating. I am looking at clergy support for Planned Parenthood, and I continue to be surprised and delighted by the archival documents Jon found for me at Smith College. He also took 30 pages of really good notes that have been invaluable to this chapter. Hey, Jon, look forward to a major acknowledgment in a book that nobody will ever read! Heck, you'll probably get your own copy-- autographed, even. On one hand, the information is exactly what you would expect to find-- clergy support for Planned Parenthood hinged on the idea of sex within marriage and the notion that family planning helped make families better by ensuring that parents could raise their children "properly" with the "correct" spiritual and financial resources. Unpacking the words in quotation marks is where it gets interesting. On the other hand, the information is surprising because we don't usually think of Judeo-Christian morality and abortion in the same sentence, but Planned Parenthood has always linked the two and found plenty of clergy support for the idea. So, yeah. And I'm switching to decaf, so maybe McLovin will settle down in there!
Posted by Sarah at 2:06 PM

So first off, I NEVER said I knew everything, just a lot of things. And by the way, I was a very confident savvy 5 year old so back off. Also if you want to talk to an actual clergy member about biblical references to the bible, I've got some great sources for you. I've also got a few pro-choice rabbis and imams in the wings. Let's Pro-Choice it up!

You guys are totally gap-ad worthy in your crazy stripes!

Just back from the Iowa caucus,but did so enjoy the blog...what a wonderful late holiday...Bomma

Whoa, that is a dad-stare! I encourage Harry's left hand mouse work, though. Hilarious