I know you've all been waiting with bated breath to see what the next stage of the process entails. Kidding. Although the writers' strike has slowed down the steady flow of entertaining media, that's for sure. We either watch the worst reality tv ever invented (The Gauntlet, Biggest Loser Couples), or we watch the election. Project Runway is the best thing on TV right now, and its not even that good. But then, Lost starts tomorrow, and Ben is probably trolling spoiler sites even as we speak.

Speaking of the election. We are obsessed-- we watch every debate; we debate every bit of commentary. It's fun, see, because we both like different candidates. I love Hillary, and Ben is all for Obama. (Did he snub her at the State of the Union, or was he REALLY talking to McCaskill?) The rancor with which we discuss the other person's candidate is unsettling to anyone not accustomed to our bickering. It would be very Who's Afraid of Virginia Wolf-ish if only I could drink.

Did anybody else think that CNN spent way to much time covering the entrances of presidential candidates and the cabinet members? I felt like I was watching the Golden Globes red carpet I never got to see on E (because that press conference? Terrible!)

Anyway, the room (Yes, I know. My transitions are still weak, but it is early in the semester.)

Bomma and Jack surprised us with a box full of the cutest fire truck bedding we have ever seen, and we are so excited to use it in the new room. We are waiting to transform the crib until we get Harry the heck out of it. Until then, a few sneak peaks:

Here's the quilt and pillow on Harry's bed 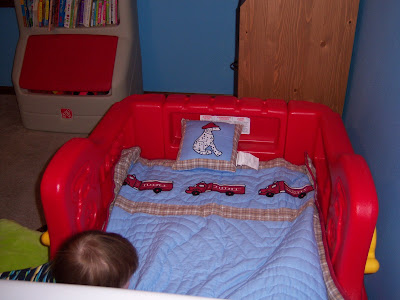 Heres the bumper on the crib: 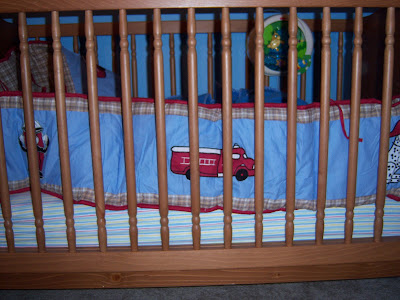 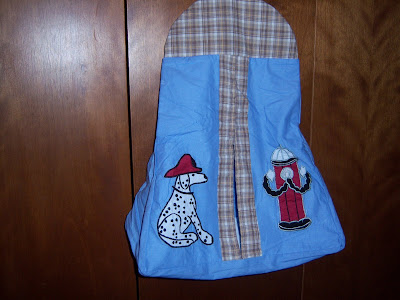 And here's a box full of coordinates: a valance for the window, a dust ruffle for the crib, a fitted sheet, and some really cute wall hangings 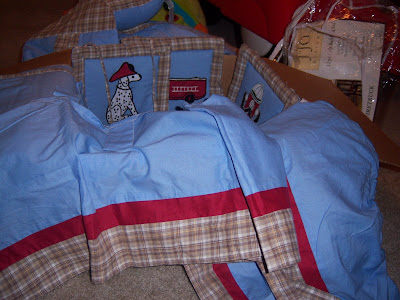 Thank you so much for the wonderful baby gift-- something for the brothers to share!
Posted by Sarah at 10:22 AM

so glad you like it...as I was told, "use it in the best of health"..we are so proud of your little family, Love Grampa Jack and Bomma

So cute! And awww, brothers!!

Sorry to hear about the writer's block! Soooo close to finishing.

You're looking well, I hope I look that good when we have another one!