Barnes and Noble. Not Free. That's the Library. Ooops.

We spent an enjoyable hour or two at B&N the other night. Well enjoyable except that I stood in the worst line ever (worst because people were slow and surly and a little smelly-- a really bad combination) at the fake Starbucks counter for decaf and then wound up with a cup of cold coffee that I couldn't do anything about because I couldn't stand to stand in that line again.

That minor issue aside, we all had a blast reading books and buying books (yeah-- we're going to the library from now on, or at least once in awhile because the library doesn't serve coffee, cold or otherwise, but it is right next to the best pie dealer in town. Ha! Pie dealer! I can't decide if that would be funnier if it were like a drug dealer with pies, or a car dealership selling pies. Probably cars. Like, could I take a test drive? Finance my pie? Would my fudge bottom taste better with a moon roof? Not MY fudge bottom-- that's gross-- I would never say that-- who does say that, really? I mean pie that's chocolate on the bottom layer and-- never mind. This has gotten very odd and tangential. Although the drug dealer with pies? Also funny. Could I freebase pie, maybe? Snort it? Smoke it? ).

The point is, we should borrow books every now and again. Also, at the library, we would not have had to leave with this backpack. This Disney backpack. And I have serious Disney issues, people. How does Disney treat women in their films, I ask you? NOT WELL. I mean, you have all the dead moms (Bambi's, Ariel's, Cinderella's, etc) and all the evil jealous wicked stepmoms (Snow White's, Cinderella's, etc), but then there are the moms you may not even notice as being awful role models until you read between the lines. Mrs. Incredible, who gives up her superpowers to vacuum while her husband reads the newspaper-- what decade is this people?-- and tells her kids they have to contain their greatness if they want to fit in with society. And this doesn't scratch the surface of the class issues in the Incredibles (like entitlements versus government handouts, for example, and the issue of who is entitled and who is a dependent). But yeah. Another tangent for another day 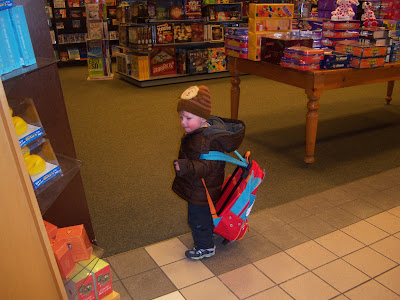 Keep in mind, he doesn't even know who the hell Mickey Mouse is- he just likes it because it has a handle and wheels. Soon he will buy peripherals for his laptop and start lugging this thing everywhere he goes. Which? Not very far. 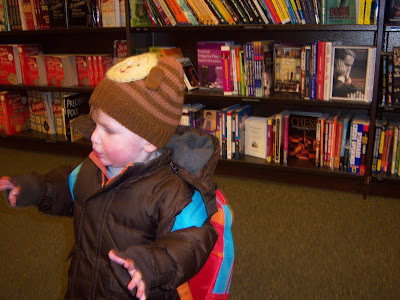 But seriously, really cute, huh? And he was so sad when he thought he might have to leave it at the store. Yep. Nothing like rewarding those tears. I'm sure that won't come back to bite us on the ass, huh? Oh, and you should hear him say "Back pack." A-dorable. 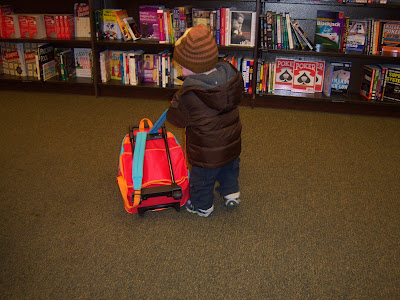 Also, Harry likes pie, too. I had a major pregnant moment the other night, and Ben went to the aforementioned pie dealer and scored 3 sweet pieces -- I gave Harry a forkful of peanut butter pie (the best food in the world), and he was suspicious at first, but soon, he licked the fork. Then his eyes lit up, and he sucked the rest down in a heartbeat, saying "Mmmmm, pie. Mo pie.... done...mo pie...mmmm."
Posted by Sarah at 6:56 PM

Anyhoo...I want to point out why the tears flowed about the backpack. I say to Sarah, "we don't need to get this bag right, we should just get some books..." Sarah agrees, I begin to walk away, putting the bag away...Harry begins sobbing...sad...funny...funny...but sad never-the-less. I give Sarah a look like, should we get the bag (the kid really wanted the bag, he seemed to like it, I wanted to go to Toys R US and get him a toy anyway) at the same time I am thinking this Sarah mouths to me, "I already told him he could have it"...She makes me look like the JERK to this kid putting the bag away...and he already was told he could have it. He totally understood her too, He was sobbing saying "Mama, bag...Mama, bag"

Thanks for leaving the key out.

The kid got the bag...he was delighted, I told him Mommy told me to put it away, but since daddy loves you...unconventionally he will get you the bag...

What a funny story! Of course he needs the bag! I think we have some extra clips so he can clip other bags onto it..
It seems like I remember Sarah heartbroken when we started to leave a Venture store without some blue denim ballet flats with sparkles on the toe, and she was about 6 at the time!
The pictures are so cute. I think the bag thing is an inherited trait, dont you?

Okay, Ben, that's all true. BUT I think you meant to say "unconditionally," b/c "unconventionally" sounds a little creepy, no?

Are you sure you had decaf?

Just kidding. The pictures are adorable. And the pie sounds delicious!

Nevermind pitiful mother figures, how about the anatomically impossible boob to waist proportion of all Disney princesses...