On Sunday at like 10 am, we were all hanging out in Harry's room. Ben and I were using Harry's huge stuffed dog for a pillow and lounging on the floor complaining that the coffee we chugged with our donuts must have been decaf because we were ready for a nap. Harry was happily dragging things from his toy closet, playing with them for 2.5 seconds, and then flinging them aside, so he could scamper back into the toy closet to drag out more things.

Apropos of literally nothing, Ben sat up, fished his Cubs hat out of Harry's toy box and said, "I think I'll go get some paint and put some color on these walls today."

We passed a pleasant ten or fifteen minutes holding paint cards up to the wall and deciding between 20 or so shades of blue, and Harry gathered up each card we rejected and propped it up against his fire truck bed, copying the way we stepped away from the wall and studied the color with or heads cocked and our eyes narrowed.

Ben was like totally beyond thrilled to find out it was Menards Days, and he bought bunch of crap we don't know how to use because it was on sale, like caulk and this newfangled device called a caulk gun, along with paint and rollers and brushes, and pans and tarps-- the same stuff we buy every time we paint because we think these things are probably disposable. Are they, does anybody know?

Then he moved all of Harry's furniture into the center of the room, threw some plastic over it, and spent the next 2-4 hours taping the room while I hung out with Harry and cleaned the house, popping my head in every now and then to say helpful things like "You really haven't started painting yet?" and "Really? You're still taping?" When he finally did start painting around the trim, I offered more helpful advice like, "Yikes. You don't have to rush," and "That sure does look uneven. Maybe you should slow down."

Harry was flummoxed when he realized most of his toys (and all of his clothes and most of his diapers because we never think of things like that) were tarped off. He also thought it was strange and unsettling that his bed was pushed up next to ours. He spent most of the day watching PBS Kids and wringing his hands. He wore his jammies all day and never napped. Around 5:30, he fell asleep in his dinner, which included french fries from the pervious night because that's the kind of cook I am (and yeah, I seem to also be someone who saves leftover fries-- and they were baked in the oven and trans fat free). Since he was still in his jammies, I figured, what the hell, changed him into an overnight dinner, and tucked him into our bed, where he remained fast asleep until 7:00 the next morning, when he woke up still clutching a fry in his fist and asked for a bath and a bup.

I helped Ben paint the closet, which is why the closet is so streaky (according to Ben) and why my pajamas and socks and occasionally the carpet have blue spots on them.

So, here's the end result (still no bedding or anything for the walls. This is coming soon. We actually do have a few things for the walls, one of which is a canvas we found that was already painted with baby #2's name-- random, huh?) 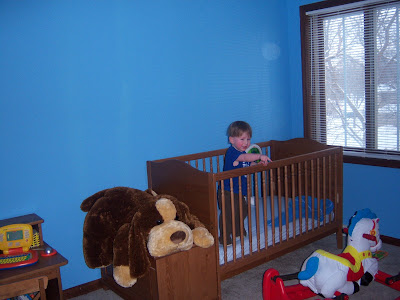 Harry and I took a trip to Build-A-Bear, where we stuffed the smaller bear for the baby and got a fire fighter outfit for Harry's bear, fka President Harrison Bearison. We had so much fun that I think we'll have Harry's 2nd birthday there because I am totally missing out on the American Girl experience, so my boys are going to stuff teddy bears for as long as I can make them think it's cool. 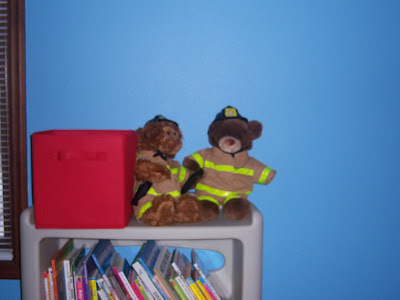 This hat is from Harry's Grandpa Dennis, who used to be a firefighter. Both Harry and Ben try it on every chance they get, but sadly I have no pictures of Ben in it. 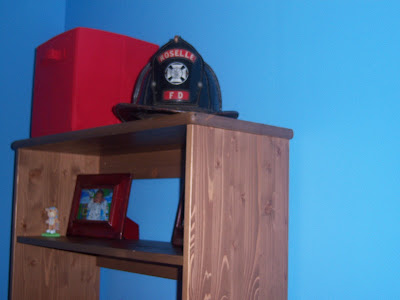 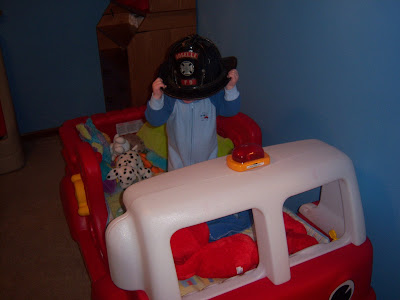 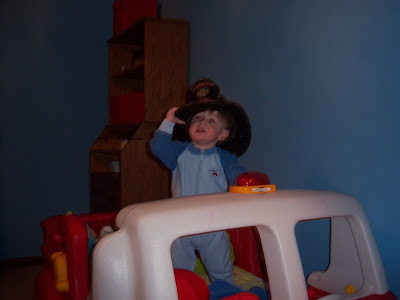 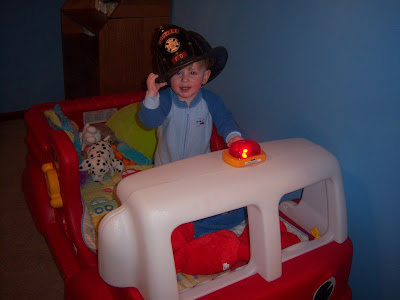 We played with all the crayons and markers Harry got for Chrismukkah, and Tadoodles make a big mess! 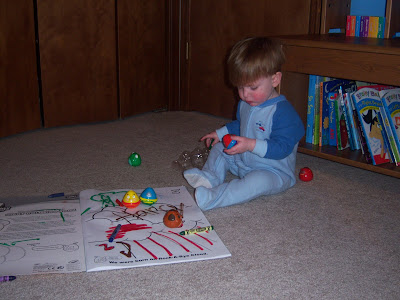 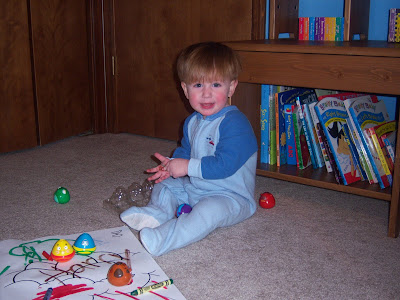 Then Harry rode around on his basketball hoop, so I guess he likes his new digs. Every time he goes into his room, he says "Blue," and nods his head. He's also started going behind his crib to poop, (and the other night, after getting undressed and before getting in the tub, he peed on the leg of his crub and then came to get us saying Uh-oh, peepee, uh-oh) so I think we'll be talking more about the potty around here. Fun times. Ya'll know how much I love public bathrooms. Can't wait to use them with someone who's not tall enough to wash his hands and is not above licking weird things. 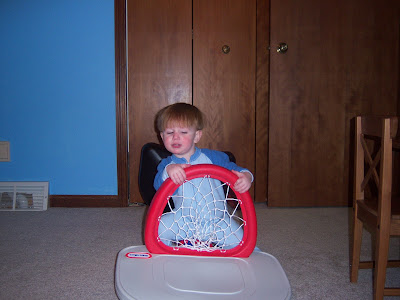 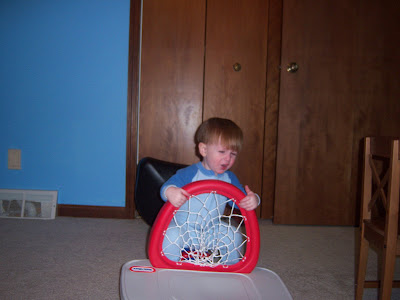 the room looks great, and Harry loks like a big brother should...he's not going to be too hard to train, I'll bet..just watch where you stand, the twins would turn to talk to me and I had wet shoes for nearly a year....Bomma

I like the color a lot! Harry sounds hilarous right now--pooping behind the crib, mimicking you guys picking out paint colors. Too cute! Coffee and donuts? Now I have to go get that tomorrow morning.

The room looks great!!! I love that Harry falls asleep in his dinner.

Ethan pulled the crayons out of the tadoodles and colored on the wall...good times.

I came across your blog by typing something random in google images (love banana, I think), and I LOVE it! Thanks for the funnies.