Not me-- god no. Although I am currently eating chocolate brownie fudge ice cream with a soup spoon and looking at my iPhoto archives and saying, "I was so thin before I got pregnant." I have heard that it's the second baby that really ruins your body, and I am starting to believe it. I work out 5-ish days a week and still I am getting fatter by the second. And not in the stomach, really. It's my hips and thighs. Wonder if the baby's in there...

Anyway, Harry's resolution is to eat more, as evidenced by these pictures:
Look at the way he's eying my bacon. 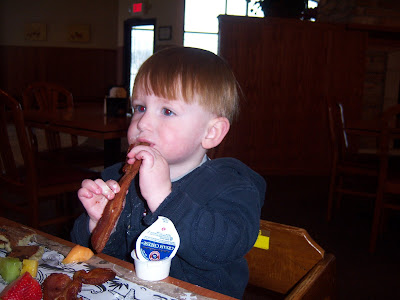 We were at breakfast on New Year's Day (at like 7:30, the earliest I have ever gone out to breakfast. Then we went to Super Target for groceries-- nobody there, either. So there are advantages to having a super lame NYE. And by super lame, I mean we watched the end of the first season of 24-- the first season-- that's like 5 season ago-- we are so behind-- also Nina was the mole? No way-- ate tons of desserts, cheese, and appetizers from Whole Foods, and went to bed at 1, which was so late for us. When Harry woke up demanding to play with his new kitchen at 6:20, we thought we were going to die, which is why we decided to suck it up and go get some food. And coffee).

Hey-- want to see a video of Harry eating? He ate all of my bacon, a fruit cup, an entire container of cream cheese, half a bagel, some of Ben's omelet, and a blueberry pancake. Maybe he's pregnant.

(click on the underlined Harry Eats Breakfast link, and you will be directed to Vimeo, and you can watch the video. Unless you have Vista, suckers. Also, why the hell didn't the video just embed? I clicked embed? Very confused.)

Harry Eats Breakfast from sarah on Vimeo.
Posted by Sarah at 9:00 PM

Haha, so cute! I loved the "Uh oh!" and the "Dada!" Charlie is able to sort through all the fruit to find the pancakes too. They learn that so young.

What a cutie pie! Have to say I love reading your blog - another one to make me laugh out loud (and lucky you - I think my first baby ended up all in my hips and thighs - frightened of what a second would do!).

Don't worry about it. I just finished Season 2 of 24. I started watching during finals. Realizing that I didn't have time to watch, I started binge-watching...like an entire disc late at night, from 1-3ish after studying. I usually had to repeat the last episode the next day because I was too bleary to remember. I haven't started season 3 yet. The breakfast is great! But I can't stop playing it at 12 seconds and hearing this odd voice announcing "bagel." It's creepy...

Did he also try to eat the crayon on his placemat? I just love him!

I can no longer watch 24 (or the Apprentice) b/c of what it does to my blood pressure. I win the "lamest" prize for that, no doubt!

I am so afraid of this second baby ruining your body idea, b/c mine was pretty badly mangled by the first. yipes!