Driving back from Illinois on Sunday afternoon, we noticed that I-90 was getting really, really foggy. We were already crabby because we stopped for lunch at the Machine Shed, and despite the huge amount of butter, bacon, and grease we consumed, we were unhappy with our super slow service. It took 20 minutes for the waitress to take our order, 15 more for drinks, 10 more for food, 20 for the check. Then, we wandered around the gift shop to let Harry pick out a toy because he was such a good boy through the wait. He got a green John Deere cell phone (or, as he called it, a "hewo," like hello), but then it took 5 minutes for the (rude) cashier to locate scissors so we could liberate the phone from its package-- you get the idea. Just hassle and bad service and heartburn. (Also, the wait staff there has to wear bib overalls and red plaid shirts and pig shaped name tags, so I guess they're entitled to a few bad days).

Harry had already slept for two hours, so we knew he was up for the duration of the trip, dropping his milk and demanding "Bup?" and flinging his cell phone to the floor amid shouts of "Hewo?" Ben and I finally reached that point in our car ride when we couldn't stand each other any longer, and we were just getting ready to bicker our way back home ("Can you stop popping your knuckles? That noise is disgusting." "Really? Have you heard yourself chew gum?") when we noticed the truck in front of us (brown and orange camouflage, reading "DORF" instead of "FORD") slamming on its breaks, and the SUV behind us loomed dangerously close to our rear bumper (and Harry in his dangerously forward facing car seat).

We both freaked a little, especially when we saw all the semis around us with their hazard lights on. Ben slowed to a careful stop, cursing the driver behind us (who later assured us he saw our baby in the back and was ready to ditch his car in the slushy median before he would hit us), and at 2:40 pm, perfectly still on I-90, less than a mile from our exit, wondering what the hell was going on.

This was going on.

I had a brief panic attack (and it is really not easy to put your head between your legs when you are 25 weeks pregnant and drowning in your own stomach acid) because the fog was so thick, I was sure someone was going to slam into the back of us at 65 miles an hour, completely unaware of the stopped cars in the mist. This actually happened to people about 2 miles behind us, and someone died-- exactly my fear. I really think truck drivers helped us out-- they stopped quickly, got in both lanes to slow traffic as we approached the accident, and left plenty of room between themselves and the car in front to make a pile up less likely. The trucks by us anyway. Since there were over a hundred pile ups and 2 deaths caused when two separate semis ran over 2 cars (A Chrysler Pacifica and a PT Cruiser-- not good day for Chrysler), I guess not all truck drivers were as vigilant as the ones who surrounded us.

No one in our immediate area was hurt, and none of our cars were damaged at all. We were the only really lucky group, though. Ben got out and talked to some of the people nearest us, and wild rumors flew up an down the cars-- like playing telephone. We called the highway patrol for updates as often as our failing phone batteries (neither of us charged them all weekend of course) allowed and tried to tell our neighbors that no one was going to force us to leave our cars on the highway and take city buses to a nearby hotel (there were city buses, but they were picking up people not injured enough for ambulances and those who couldn't drive their cars away from the scene).

A really bitchy local news lady (she's famous, damnit-- how dare we ask her a question!) told us that it was going to take 2 hours for the scene to be clear enough for us to drive away, and we were so annoyed by this. We took Harry out of his seat and let him roam the car, which he has never done before and did, happily, for the whole 2 hours. That's when we noticed it was dark; the car was starting to get really cold, and no one was moving yet. All we could see was a pink foggy glow of flashing rescue lights in the distance.

We knew the interstate was closed in both directions, but we didn't really know where the accident was. (A mile ahead of us. Thank god we had such bad service.)

Harry drank the last of his bup and fell asleep safely back in his chair at about 5:30. Because I am like the little girl in Signs and store bottles of water EVERYWHERE, we had tons of fluids, which meant I needed to pee. At 6:45 (we'd been stopped for 4 hours by this time), I almost cried because I thought I was going to pee the car, and I realized that I was going to have to do the unthinkable-- PEE OUTSIDE.

I borrowed Ben's flashlight, and opened my door. I had seen people walking up a little hill off the shoulder of the road and going in the direction of some small trees before the darkness swallowed them. Counting on the fog, the black, and my dark coat to make peeing outside as private as possible, I reluctantly crossed the shoulder into the slushy mud. Then I was hit by blinding lights as ten ambulances crept down the side of the road, on their way to survey the damage behind us. Awesome. Like freaking search lights.

I am so not the pee outside kind of person, as you might imagine.

I also ate some crackers from a trucker who offered to share his stash with a pregnant lady (but I gave most of them to Harry when he woke up at about 10:30 starving and desperate for bup -- yeah, right at the 8 hour mark).

We read some articles when we got home that assured readers the Red Cross gave out food, hot drinks, and blankets at the crash site, but no one around us saw anything like that. We just sort of shared what we had with each other-- bottled water for kids, cigarettes for smokers, some peppermints from an old guy in a Lincoln, the trucker's crackers) and we turned the car on every hour or so to warm it up. I was just getting ready to accept an offer of pumpkin pie from a woman two cars up (Which? Seems to be a common thing to travel with. Once several summers ago, Jon and I saw a woman at the Dallas airport pull a Saran wrapped piece of pie from her pocket), when Ben decided to track down a rescue worker and ask for some food for his baby and his pregnant wife. He actually got out of the car and jogged to an idling police car, when TRAFFIC STARTED TO MOVE! ben sprinted back to the car, and we crept through the grisly accident scene-- car pieces scattered along the shoulder, glass caked on the pavement, twisted cars, trucks and a minivan without a sliding door still stuck in the median.

We barely had time to gawk, though, because we were so excited to be going home at 11:40-- 9 hours after we stopped in the fog.

We were really lucky, since the only thing I have to write about is our hunger (easily fixed with a midnight meal, which really appealed to Harry, as did his bedtime routine-- routine, only so cool at 1:30 am), the yuckiness of peeing outside, and the kindness of stranded strangers (although, DORF, no need to waste your battery sharing Pantera with those around you, really).
The fog 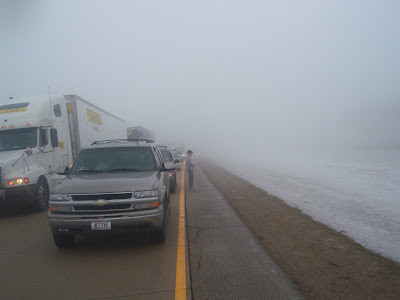 Harry ate his shoes, a good snack in a pinch 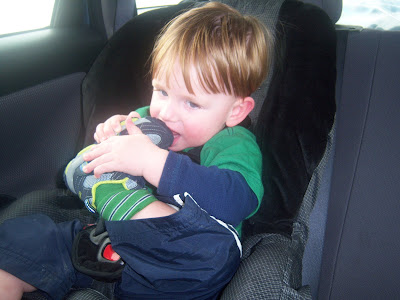 He also passed the time by spitting water on himself 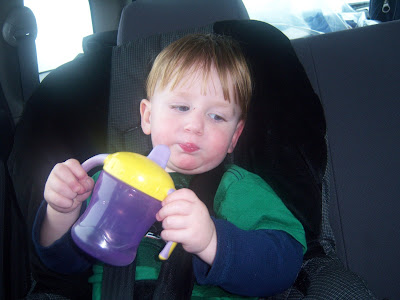 which he thought was hilarious 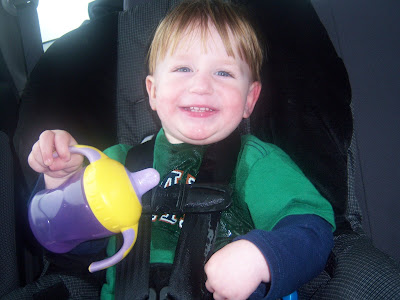 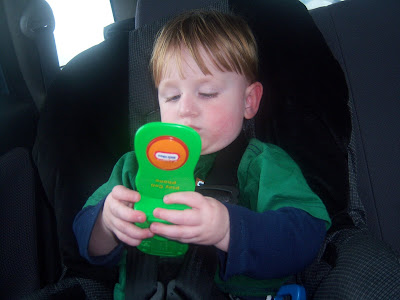 Here we are looking annoyed when we thought we had 2 hours of car time! Ha! 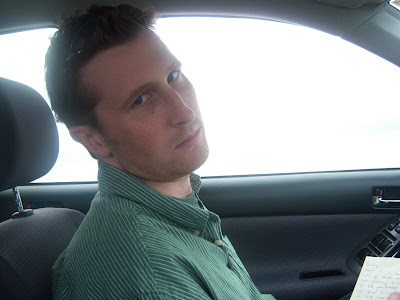 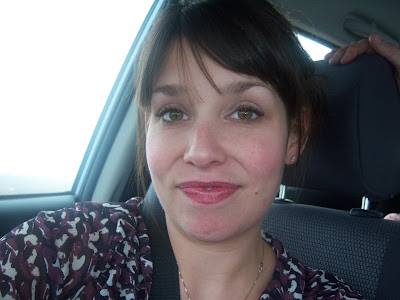 I am actually NOT stuck on my dissertation right now, so maybe more posts later, but probably, just more chapter 4 for me!
Posted by Sarah at 10:12 AM

You were so bravw abd col about the whole thing! It is impessive

Oh my God! I am so glad you guys are all alright! How scary. I cannot imagine being stuck in a car for 9 hours. With a toddler. And pregnant. Thank goodness for bad service is right!

I laughed out loud at "Really? Have you heard yourself chew gum?"

Your Grandma Betty and Grandpa Leonard were watching over your little family..you deserve angels on your shoulders...our love and caring...Bomma

What an AWFUL experience! I'm so glad the service at the restaurant sucked.

thank goodness you're all okay.